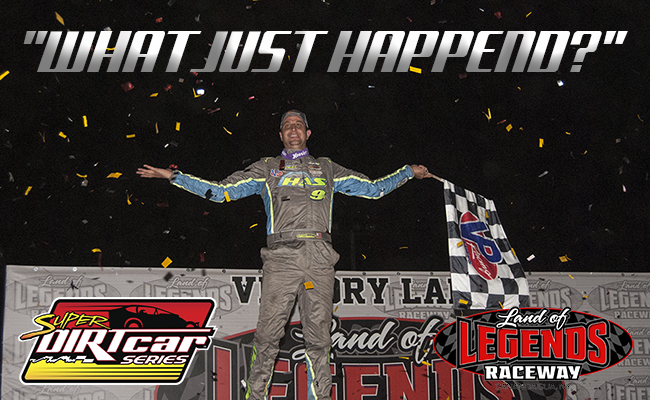 CANANDAIGUA, NY — July 4, 2019 — It took 99-and-a-half laps, but the packed grandstands at Land of Legends Raceway saw a huge Fourth of July fireworks display in the middle of turns three and four on Thursday night when Max McLaughlin and Erick Rudolph made heavy contact in a final turn battle for the checkered flag.

McLaughlin had led 99 laps, but Rudolph closed quickly as the two passed the white flag and went off into turn one. Some contact between the two in the first corner became huge contact when they exited turn three. Rudolph was on top and edged ahead, lapped cars raced on the bottom leaving McLaughlin a slight spot in the middle. It was too slight and he sailed it off and collected Rudolph as the two spun to a stop.

Only a couple of laps earlier, Matt Sheppard made a stunning three-wide move going into turn three to swipe third place. As it turned out, that was the winning move because when Sheppard raced around the corner on that final lap, he saw the two leaders piled on top of each other. Billy Dunn chased Sheppard across the finish line in second after spending a majority of the race battling wheel-to-wheel in the top three. In third place was outside pole sitter Just Wright, who simply kept his nose clean for his impressive finish.

The Liberty 100 marks the fourth checkered flag of Series competition in 2019 for Matt Sheppard. Having been mired in seventh position for a long green flag stretch, Sheppard did not think he had the car to beat.

“I wasn’t particularly happy with my race car,” Sheppard said. “I am at a loss for words. I don’t know what to say. It was around lap 65 or 70 and we were riding around in seventh. We were just trying to hold on to salvage something at the end. On a restart I got around a couple guys and got up to fifth. Billy [Dunn] and Peter [Britten] made some contact and that opened up a door for me. I got up to third but Max [McLaughlin] and Erick [Rudolph] were gone.”

Sheppard was in the right place at the right time.

“At the end I saw the white flag and if I can hold off Billy and finish third tonight, I’ll take it because this thing was garbage. The next thing I know I got into turn three and I see those guys parked on top of each other. I was like, “What just happened?”

“What just happened?” is what every race fan at Land of Legends Raceway left the track wondering.

At the conclusion of the Liberty 100, both Max McLaughlin and Erick Rudolph loaded up their race cars in haste so neither were available for comment. McLaughlin took to social media to make a statement, saying the No. 25R ran him up the track off of turn number two. McLaughlin then entered turn three too hard and pushed up the track making heavy contact with Rudolph’s left rear. He said he “feels terrible” and “didn’t have any intentions to dump him. Mistakes made. Learned.”

Home track hero Dunn had a great finish on the second step of the podium.

“It was a challenging track,” Dunn said. “I would have five or 10 laps where I would feel like I was just as good as anybody in front of me, and then I struggled on the restarts until I put some heat in the tires.”

Wright put together 100 laps of strong, competitive racing and was rewarded with a third-place finish.

“I am at a loss for words,” Wright said. “Usually in 100-lappers we don’t do very well. We pull off and get out of the way. If you had told me this morning that I would be in third place tonight … I had the best car in the top five, but probably the worst driver. We’re figuring it out. Speechless.”

Incremental changes and work on the car may have finally paid off in a big way.

“We tinkered on some things,” Wright said. “My Dad and I sweated it out at the shop just getting stuff right where it needed to be. This is like a win and my grandparents and father were here too see it.”

Since Matt Sheppard won the from 11th starting spot, he received the Dig Safely NY 811 $100 bonus.

The Billy Whittaker Cars Fast-Time Award went to Larry Wight for his mega lap around the half-mile dirt oval.

The next Super DIRTcar Series race is July 18 at Orange County Fair Speedway for the Battle on the Midway 100.