Race Recap: BACK TO BASICS: Sheppard Shows the Way at Weedsport for $7,500 Win

WEEDSPORT, NY – The seven-time Super DIRTcar Series champion Matt Sheppard showed the fast way around Weedsport Speedway to pick up round one of the Cavalcade Cup and a big $7,500 paycheck. Polesitter Max McLaughlin failed to fend off Sheppard’s early-race charge and settled for second place. A fast and furious Tim Fuller finished third to complete the podium.

At the drop of the green flag, Max McLaughlin got the holeshot and took the lead. That left third-place starter, Matt Sheppard, to battle side-by-side with Stewart Friesen in his black #44 Halmar Racing Big Block. While the #32C Carl Myers Enterprises sponsored machine drove off into the Weedsport night, Sheppard hooked up on the low side and powered away from Friesen. The Waterloo, NY native in the cool blue #9S got into a rhythm following McLaughlin for the first seven laps. Then Sheppard found something and started angling his car for a run on the outside of the #32C.

“I road behind him and was running the same speed for a little there,” said Sheppard. “Then I don’t know if he slowed down or if I gained speed, but I felt like he was holding me up. I gave the top a shot and everything worked out. I rolled around the top and cleared him.”

It was lap nine that Sheppard made the move around the outside and stuck the pass for the lead. After that, it was a game of lapped traffic management as the race went on without a single caution flag.

Sheppard is one of the great lapped traffic managers of all time. It’s a skill that only the elite will ever have a chance to hone over time. Drivers must be fast, consistent, and able to make decisive, confidant moves to properly move through lapped traffic as the leader.

“You gotta keep cars between you and the second-place guy. Then it’s pretty much clear sailing,” noted Sheppard. “I knew the race was short enough that I wasn’t overly worried about the wear. We were able to put the car where we needed to.”

The #9S led the rest of the way and mounted Victory Hill to celebrate Super DIRTcar Series win 82. As fast as polesitter Max McLaughlin, from Mooresville, NC, was throughout the race sessions, he was always chasing Super Matt.

“Sheppard was really good all day,” said McLaughlin “He was consistently a tenth or two ahead of us. We changed a lot of stuff tonight. Even though we had speed, we knew we weren’t fast enough to beat him. We changed shocks. We changed springs. We changed all sorts of stuff to get better, but we were just a little bit off of him. We definitely gotta get better for tomorrow. We’ve been chasing the #44 all year and now it seems like it’s the #9S now. He’s tough to beat. They are two of the best and any time you can beat one of them is usually a good day.”

After giving up the lead to Sheppard, McLaughlin hit his marks and was able to hold off Friesen until he faded and then Tim Fuller who was charged to the front.

“I don’t think about who is behind me,” McLaughlin said of his challengers. “I keep my eyes forward. Friesen must have tried to make something work back there and slipped back. I knew Fuller was better than us. He’s one of the best in the slick.”

Tim Fuller, from Watertown, NY, in the #19 St. Lawrence Radiology Big Block was fast but was forced to settle for third. He made a desperate move for second but had to bail out. “I had to ride it out,” Fuller said. “I went outside once and lost four car lengths going for second.”

Few drivers are able to coax their Big Blocks around slippery tracks as well as Fuller, but he came up short in a run for the win.

“I was running half throttle at most,” Fuller noted of his racing line. “All the crumbs above the bottom line made it hard to venture out there. I wanted to take a run but what can you do?”

Mike Mahaney, in the Adirondack Auto #35 Big Block, picked up the Billy Whittaker Cars Fast-Time Award with a time of 16.372 around Weedsport Speedway. That’s over a full second off the Super DIRTcar Series track record of 15.156 set by Demetrios Drellos in 2019.

NEXT: The Super DIRTcar Series returns to Weedsport Speedway for round two of the Cavalcade Cup. This time the Big Blocks race for 100 laps, $10,000, and a guaranteed starting position for NAPA Super DIRT Week at Oswego Speedway Oct. 6-10.

WEEDSPORT, NY – The seven-time Super DIRTcar Series champion Matt Sheppard showed the fast way around Weedsport Speedway to pick up round one of the Cavalcade Cup and $7,500. Polesitter Max McLaughlin failed to fend off Sheppard’s early-race charge and settled for second place. A fast and furious Tim Fuller finished third to complete the podium. 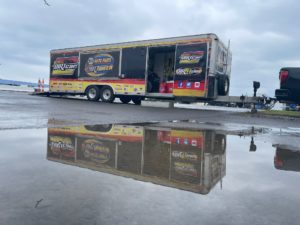 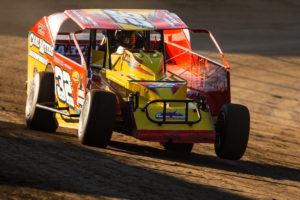 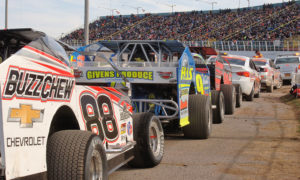 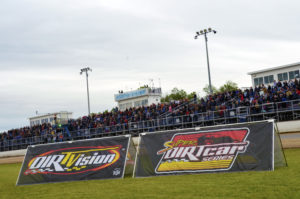 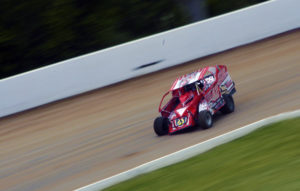 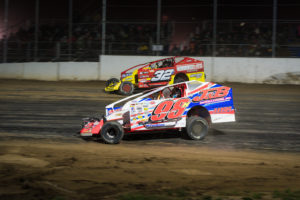 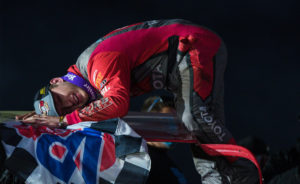