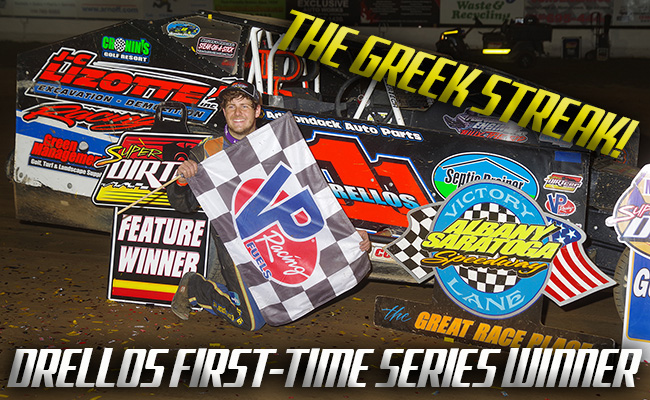 MALTA, NY – September 21, 2019 – It’s a rare moment in motorsports when a rookie pulls out a huge victory in the top echelon of their driving discipline. On this night, Rookie of the Year contender Demetrios Drellos did just that, shocking the world of Big Block Modified racing by winning his first Super DIRTcar Series race at Albany-Saratoga Speedway in one of the biggest races of the year.

Drellos battled back the best in the business including Matt Sheppard, Larry Wight, Billy Decker, and Mat Williamson to pick up $10,000 and a guaranteed start in the Billy Whittaker Cars 200 at NAPA Super DIRT Week XLVIII. Billy Decker crossed the line in second and Mat Williamson had his two-race win streak broken with a third-place finish.

The night of racing started out well for the Queensbury, NY driver Demetrios Drellos after setting the second fastest lap in his Time Trial group, which put the No. 111 on the outside pole for his Heat Race. Pole-sitter Matt Sheppard got the best of him but soon the roles were reversed. In the Dig Safely NY 811 Redraw, Drellos drew the pole position and Matt Sheppard’s designated drawer put the No. 9s on the outside pole.

At the drop of the green flag, The Greek Streak outdueled Sheppard to retain the top spot in the early going. He eventually stretched out a substantial lead with the first caution coming around lap 40. After that, the rest of the heavy-hitters like Larry Wight, Billy Decker, and Mat Williamson stepped up to the plate but Drellos denied all-comers.

“Every lap that clicked by I thought Larry, Matt, Billy, or Williamson would get by on the bottom. I was just so persistent on the top. I know it’s really risky picking the top lane here on the restarts but the top has been so fast here. It worked out for me,” said Drellos.

The No. 111 pilot sliced and diced his way through heavy lapped traffic in the latter half of the race. The track conditions were conducive to fast, side-by-side racing, which made the traffic difficult to work through.

“I follow a lot of good guys on the Series and they aren’t afraid to take risks in lapped traffic. You gotta go and if you don’t go, someone’s gonna pounce on you,” Drellos explained.

“It’s been such a learning curve running with these guys every week and it’s finally paid off.”

Drellos’ voice wavered with emotion as The Voice of the Super DIRTcar Series Shane Andrews interviewed him in Victory Lane when he said, “I watched a lot of Super DIRTcar Series races from those seats right up there and it feels really amazing to be standing down here not too many years later beating the best.”

The win will take a little time to sink in because it’s a rare feat to beat your heroes at their own game:

“I’m speechless, to be honest. You have Mat Williamson, Matt Sheppard, Billy Decker, Pat Ward, Tim Fuller, I mean, I’ve watched those guys for years. They are just unbelievable stars here. Just to say I beat them in a Super DIRTcar Series race is something I never even dreamed of.”

The Franklyn Flyer Billy Decker was the final driver to reach the rear bumper of the No. 111 but he too failed to overtake the young rookie.

Mat Williamson now has four podium finishes in a row including two race wins. The team has been constent all year but now Williamson is clicking off great finishes and has begun reeling in points leader Matt Sheppard.

“Confidence as a lot to do with it. It seems like when we won Orange County [Centennial Celebration] it started rolling from there. Forutnately I have a really good car owner and really good crew guys. They make my job real easy behind the wheel,” noted Williamson.

The racing surface was tacky and provided a lot of grip from the bottom to the top of the speedway.

“We tried to move all over the place. The track was really fast and racy,” said Williamson. “I think we tightened up a little bit too much. Demetrios was really good. Hats off to those guys, it’s cool to see him win.”

Mike Mahaney stormed through the field to pick up sixteen positions as the KSE Racing Hard-Charger Award. He finished seventh after starting deep in the field, but the tenacious Huttig No. 35 team’s hard work paid off.

In the Dig Safely NY 811 Redraw, Peter Britten had his daughter for a designated drawer. The curly-haired youngster joyfully picked up a neon yellow t-shirt and awarded Britten one free Hoosier Racing Tire, but also a twelfth place starting position. 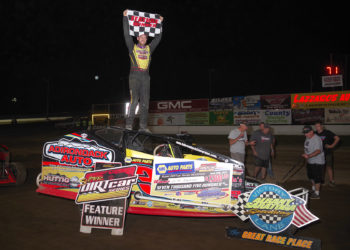 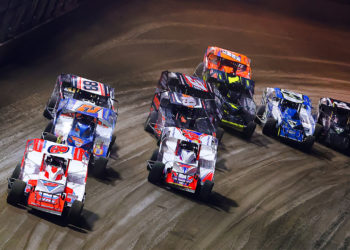 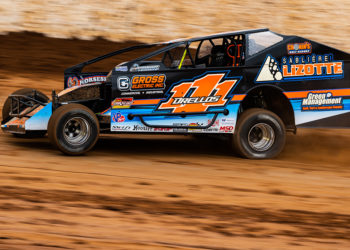