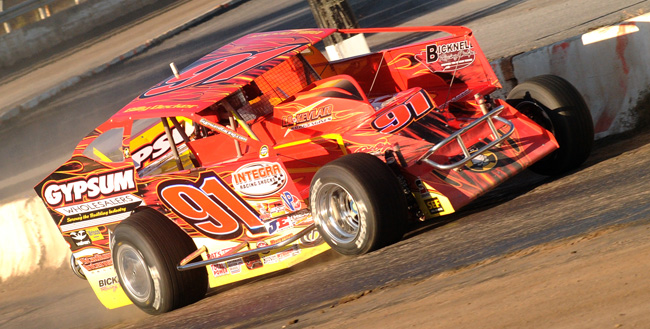 Decker, of Unadilla, N.Y., posted a lap around the Moody Mile in 29.927 seconds at 120.293 mph in his Big-Block Modified after already topping the 358-Modified field in 31.517 seconds at 114.220 mph. There were 61 cars attempting to qualify for the SEF Small Engine Fuel 200 Presented by Ferris & Snapper while 50 cars tried to capture one of the prized top six positions for the 358-Modified Nationwide Insurance 150.

“The goal coming into the day is to be the fastest car in both divisions and we were fortunate enough to get it done,” Decker said. “I don’t know how much momentum it gives you but it’s a huge disappointment when you don’t get locked into the top six. We feel we have a good enough program to be locked into the top six every year. It’s more a sense of relief when you get it accomplished than it is a morale boost.”

The top six drivers in Big-Block Modified and 358-Modfied time trials are locked into the first three rows of their feature events with Friday night’s Triple 20s and Twin 20s filling out much of the remaining field.

Dunn will start alongside Decker in the SEF Small Engine Fuel 200. Dunn, a dominating force at Can-Am Motorsports Park the past couple of seasons, has seven Big-Block Modified victories this year but has dreams of winning at Syracuse on Sunday.

“Last year I had to pass about 20 cars in the first 30 laps, I’d really rather not have to do that if I don’t have to,” Dunn said. “If I have a chance to win this race, I’d rather win it from the front. … It would mean everything. This is what I grew up watching. It’s our biggest race. It’s our Daytona 500. I came here this year expecting to time trial well, and with our practice speed and when we were going out in time trials, I expected a top-six but I’m really happy with second.”

For more on Super DIRT Week XL, make sure to click SuperDIRTWeekOnline.com each day.

Bartemy Racing Full Assault: The Herb Bartemy-owned race team was one of the final teams to enter the pit area on Thursday, and came loaded for bear. The Bartemy team arrived with a Big-Block Modified for Ted Christopher, along with 358-Modifieds for Herb’s sons Aaron and Adam.

Last Minute Deals: Two Syracuse entries came together within the last week. Alan Johnson partnered up with Kenny Saya Racing to run the team’s second car in the SEF Small Engine Fuel 200, while Harry Murphy Racing decided to put together a 358-Modified for Steve Hulsizer to run in the Nationwide Insurance 150. “It’s a good thing that Wednesday got canceled, we just finished the car (Wednesday) night,” Murphy said.

“Coach” Brachmann: Chad Brachmann has experienced a lot of success at Super DIRT Week in the past. This season, Brachmann finds himself on the sidelines at the Syracuse mile. Lernerville Speedway champion Jeremiah Shingledecker is making his first attempt at the SEF Small Engine Fuel 200, and Brachmann has stepped in to help. “He’s been giving me a lot of good advice,” Shingledecker said. Shingledecker is one of 12 drivers who will compete in the Safety-Kleen Shootout on Friday afternoon.