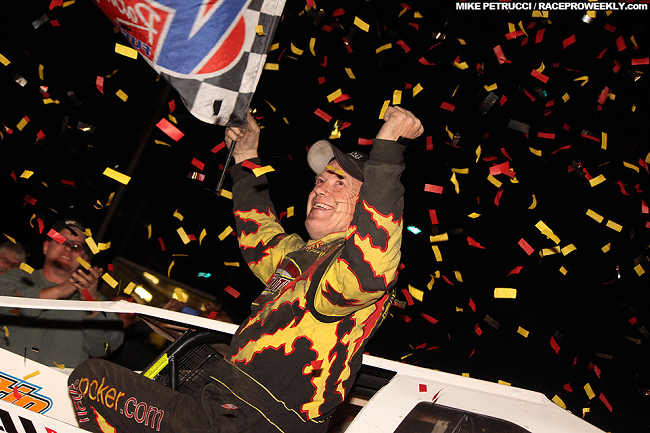 MIDDLETOWN, NY – October 23, 2011 – Danny Johnson was not to be denied in the 50th edition of the Eastern States 200 at Orange County Fair Speedway. Two red-flag periods, a bevy of cautions, and nearly 140-laps of work on his right-rear Hoosier tire would not stop Johnson from claiming the $20,000 top prize.

Johnson would inherit the lead from Justin Haers on lap 136 as the driver from Phelps, NY made his mandatory pit stop. Johnson would dominate the rest of the race to pick up his second Super DIRTcar Big-Block Series win of the season.

“This car and this crew were great today,” explained Johnson, who only trails Brett Hearn (8) in Eastern States 200 victories. “We had to pass a lot of cars today but we made it work and here we are.”

Orange County Fair Speedway regular Tim Hindley would bring the car home with a stout second place finish. “Those restarts towards the end were a little rough. The track was good for most of the race, but the top wasn’t there in 3 and 4 towards the end. We had a really good car though.”

Hindley also finished second to Johnson in the 2008 Eastern States 200. “We’ll get one of these. We just need to beat Danny.”

Danny Johnson started the Eastern States 200 from sixth starting spot and ran a conservative race early. A lap-65 caution for Jerry Higbie and Peter Britten tangling saw nearly half of the field make their mandatory pit stop. Johnson came out of the pits fifth of the cars that had pitted, but pitted the very next lap, restarting the race at the tail of the field.

“The original plan was to take fuel only,” explained Johnson. “The guys checked the tire and told me there was no way it was going to last another 140 laps so we came back in for a new tire.”

Johnson immediately started working towards the front using the outside to pass cars lap after lap. Johnson had worked his way into the top-5 by lap 115 with Andy Bachetti the only driver in front of him that had made the mandatory stop.

Bachetti appeared to be Johnson’s biggest threat, and was in position to win his first Eastern States 200, but his Steve Hough-owned #34 came to an abrupt stop in turn 3 on lap 120, ending his fantastic run.

With Bachetti out of the event, Gary Tomkins proved to be a threat, as he moved up behind Johnson and began challenging him for position.

When Justin Haers finally made his pit stop on lap 136, Tomkins found himself in second place with Johnson in front. It appeared as if Tomkins was the only car able to maintain the pace set by Johnson, but a late race right rear flat negated the fine run put in by Tomkins.

Johnson went on unchallenged until a caution on lap-198 saw the field bunch up for one last chance to steal the victory from Johnson. Billy Decker would restart to the outside of Johnson, but Johnson proved too strong, as he immediately opened up his lead and went onto the win.

Heavy impact with the outside wall, and then with Mike Ruggerio saw S.E.F. 200 winner Stewart Friesen complain of neck pain. The safety crew was quick to the scene and cut him out of the car and placed him on a backboard. He was taken to a local hospital where he was treated and released with no serious injuries. The race was red flagged.

A second red flag came out when Jimmy Phelps, while running in the top-5, was turned on a restart resulting in a pile up that blocked the track. Tim Fuller, Danny Creeden, and Tommy Sears would all have their days end in the pile up.

Brett Hearn was running in third and appeared to have a car capable of winning his unprecedented ninth Eastern States 200 when mechanical problems ended his day on lap 85.

Clinton Mills, who nearly won the 2010 Eastern States 200, was involved in a scary flip after heavy contact with the first turn wall during one of two consolation races Sunday afternoon. He walked away without injury.

The two consolation races were won by Stewart Friesen and Mike Ruggerio.

The Super DIRTcar Big-Block Series will now head to the Dirt Track at Charlotte for The World Finals November 3-5. For more information, visit SuperDIRTcarSeries.com.