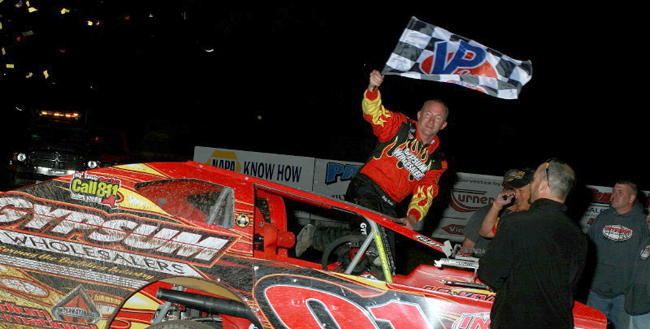 With Jeremie Corcoran now at the reigns of Canandaigua Motorsports Park, the Central New York oval found its way back onto the Super DIRTcar Series schedule in 2011. Race teams showed their support by packing the pit area full of racecars. Nearly 40 Big-Blocks showed up to make the final starting field.

Decker started the 64-lap feature from the outside pole, but it was defending Super DIRTcar Series champion Matt Sheppard who blasted into the early lead. Sheppard used the outside line to his liking early in the event, as he rode around the outside of the ‘Land of Legends’ in his Xtreme Lubricants big block modified.

Sheppard, who already has four victories in weekly competition this season at Canandaigua, proved to be the early favorite to win as the early stages of the race played out.

“I was throwing everything I had at Matt (Sheppard) early on,” explained Decker, a two-time Super DIRTcar Series champion. “Our car was pretty mediocre to start off.”

Both Sheppard and Decker were able to open up a straight-away lead on the third place running car of Rob Bellinger. The torrid place set by the top two leaders found them in lap traffic by lap 9.

After a lap-12 caution flag for a stalled Pat Ward, it was Justin Haers who began making his presence known. After starting from the inside of row 4, Haers began a methodical charge to the front, finding bite on the bottom of the track to move passed Vince Vitale on the restart for fourth spot, and following a caution flag for Derrick Podsiadlo spinning on the front stretch, used the outside to pass Rob Bellinger and move into third.

Haers quickly began catching the Xtreme Lubricants big block modified of Sheppard by utilizing the moisture laden inside line and Sheppard struggled to find bite on the outside. A lap-44 caution, just as Haers had caught Sheppard for the lead, proved to be the best friend of Billy Decker.

Decker, whom had lost the third spot in the running order to Hearn before the caution flew, saw himself on the outside of row-two on the double file restart. Matt Sheppard chose the outside line for the restart for the first time all night.

“I got real lucky that Sheppard chose the outside on that last double file restart with us starting fourth,” said Decker. “From there the track just changed perfectly for our set-up.”

The lap-44 restart saw Decker charge from fourth to second by the time the field reached turn one and instantly applied the pressure to Matt Sheppard, running the low lines in turns 1 and 2, and running the top side in turns 3 and 4.

Just two laps after the restart, with less than 20 laps remaining in the feature event, Decker was able to complete the move and take over the lead and quickly open up a gap over Sheppard, who now had to deal with challenges from Hearn and a hard-charging Tim McCreadie.

On lap 54 Hearn was able to pass Sheppard for second, but despite a lap race restart, wasn’t able to mount a serious challenge for Decker, who cruised to his first win Super DIRTcar Big Block Series win since March, 2010.

Brett Hearn and Tim McCreadie made late race charges to second and third respectively, while Matt Sheppard and Justin Haers rounded out the top 5.

Australian Peter Britten started off the night by picking up his first career Bilstein Fast Time Award with a lap of 18.308 seconds.

The next Big-Block Modified Super DIRTcar Series event will be the Brett Hearn-promoted “The Big Show III” on Tuesday, June 21, at Orange County Fair Speedway.

If you can’t be there in person, you can still hear Shane Andrews call the action on the Dirt Radio Network at DIRTVision.com.