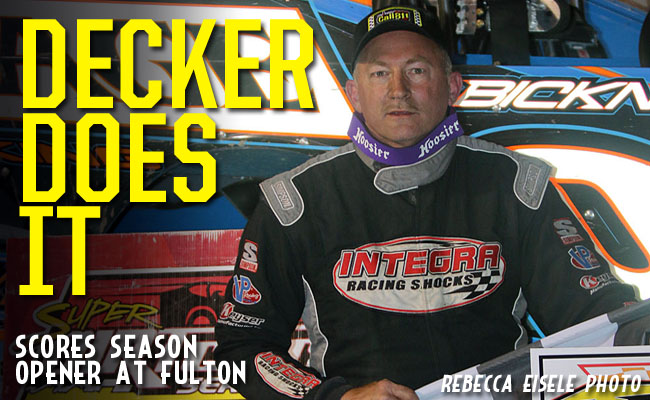 FULTON, N.Y. – April 30, 2016 – It didn’t take long for the new combination of Billy Decker and car owner Mike Payne to find their way to victory lane on the Super DIRTcar Series trail. The duo joined forces over the winter and their first series event together was Saturday’s Highbank Holdup at the Fulton Speedway. Just like he’s done so many times in the past, Decker worked the bottom of the speedway methodically to first get the lead and then to brush off attacks from Tim Fuller in the final laps to secure the win in the 100-lap event.

“I’d be lying if I didn’t tell you I really wanted to win this race,” said an excited Decker afterwards. “I had to cut my old buddy Fuller off there on the backstretch to get it done. My car didn’t fire too good on the restarts. I have to thank Mike Payne Racing. This is awesome. It is our third race together and there are good things to come. I’m tickled to be here. This was a lot of fun.”

Fuller was joined by joined by Tom Sears Jr. on the front row for the start of the race. Fuller went to the bottom of the first corner to wrangle the lead away from Sears. Fuller paced the 31 car starting field for the opening circuits with Larry Wight was marching his way from the sixth starting spot into second to become a contender before lap 10.

It didn’t take long for Fuller to find himself in traffic as he caught the back of the pack on lap 13. He got bottled up on the bottom of the speedway and Wight went the top of the track off the exit of turn four to snatch the lead away on the same lap. They remained glued together several laps.

Wight showed the way as Fuller road in second looking for a faster line in traffic. He found it on lap 28 as he moved off the bottom of the speedway to the top groove. Wight had moved down in an effort to get through traffic opening the lane for Fuller. Fuller and Wight ran side-by-side until lap 36 when Wight made a mistake on the cushion in turns one and two allowing Fuller to drive back into the lead.

As Fuller was regaining his position at the front Decker had advanced into the top five after redrawing seventh. Fuller had good speed on the top but Decker was even quicker on the bottom as he picked off car after car. By the time the first caution was displayed on lap 44 for Sears Jr. Decker had moved into third behind Fuller and Wight.

The action resumed again on lap 50 with Fuller going right back to his line on the top and Wight charging hard to get by. All the while Decker stayed patient on the extreme low lane of the racetrack. Decker was able to get by Wight and he was gaining on Fuller when the yellow was needed again on lap 61. This time for a spinning Mike Mahaney.

After the field was realigned Fuller remained in his groove on the top and Decker stayed low. Neither driver was willing to give up on their preferred lane on the racing surface. Fuller was running that lane when he caught slower traffic yet again on lap 79. This was the break that Decker needed.

Fuller’s lead was negated quickly as he struggled to find a way through traffic. Decker pulled alongside and the pair raced together in traffic for several laps before Decker edged his way to the lead on lap 83. Fuller didn’t lose much ground initially as he stayed within striking distance of Decker. Eventually he lost the runner-up spot in traffic as well to Jimmy Phelps.

“I didn’t think I was ever going to get there,” stated Decker. “It took a little rubber down there in turns three and four and Tim was going across. I wanted him to keep doing that because I knew I’d be there in a minute. When he got to traffic and he couldn’t use the whole racetrack that’s what let me get to him.”

One final caution was necessary on the 95th circuit, this time for Eldon Payne who had gone around in turn two. The single-file restart lined up with Decker in front of Phelps and Fuller. At the green both Decker and Phelps dove low going into turns one and two while Fuller put his No. 19 right back on the outside. He got by Phelps and stayed with Decker. He worked him over for the final few laps.

“I knew he (Fuller) fired really good on that last restart because he flashed up next to me,” commented Decker. “I sucked up all the backstretch. I feel lucky that I was able to get here.”

At the checkered it was all Decker taking the win with Fuller coming home a close second. Fuller went after it in the final laps but some rubber that had been laid down on the bottom of the race track in turns three and four allowed Decker to stay in front for the win.

Fuller, of Watertown, N.Y., was upset that he didn’t win after starting on the pole. He struggled in traffic and that was what cost him the race. He had one last shot with the late caution but he was unable to take advantage to get back to the top spot.

“I was licking my chops when that caution came out with five to go because I knew I was going to have the track to myself,” stated Fuller. “It screws your line up when someone is on that bottom. You can’t turn in right. All-in-all it was a good run for us but it always sucks when you start on the pole and back up. Thankfully we got that caution and were able to get back to second.”

It is well known that Decker and Fuller are good friends off the track. Fuller had nothing but praise for Decker after he came up one spot short to beating him on Saturday.

“He is probably the best friend I got in this whole racing gig,” Fuller said of Decker. “It’s really hard to find friends in this sport and he’s a classy racer. It is good to see him get into a new team with Mike Payne and win. He still conquers Fulton. It was a place I knew good at one time. He just rolled that bottom and he was a little better in lapped traffic.”

Phelps was happy with his third place finish. The Baldwinsville, N.Y., pilot got passed by Decker in traffic midway through the event and followed him from there. He did what he could in the final few laps but he felt like his car was about the same as the top two.

“I think our car was really good on the bottom all night,” commented Phelps. “Our problem was we weren’t versatile enough to roll around the outside of lapped cars early and that allowed Billy (Decker) to sneak by and Fuller to get away. I think we could have won the race had we not lost that spot. We had three cars right at the end going the same speed and it could have gone any way.”

Billy Dunn was able to come from the 17th position to finish in fourth with Stewart Friesen advancing late as well to finish fifth from 14 th.

Sears Jr. earned his first ever Pole Position Raceway fast-time award with a lap of 17.201. The five heat races were won by Sears, Wight, Phelps, Hearn and Fuller. Rob Bellinger and Justin Haers each won their respective Last Chance Showdowns.

The Super DIRTcar Series Big-Block Modifieds return to action at Williams Grove Speedway on June 22. It is the series’ first trip to the track since 2006. For more information and to learn how to purchase tickets, visit WilliamsGrove.com.