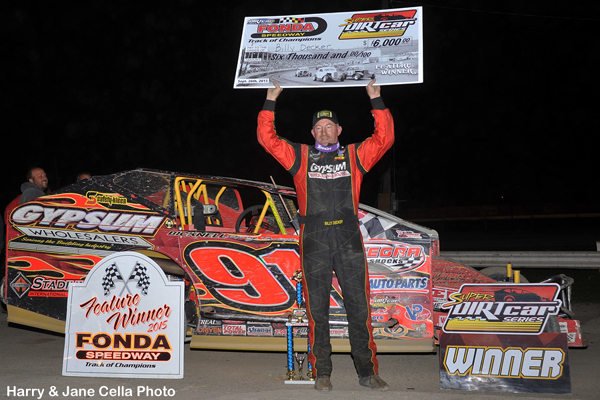 FONDA, NY – Billy Decker retook the lead from Brett Hearn for the second time on lap 78 and stayed in front the rest of the way to win the Mohawk Valley 100 at Fonda Speedway.

It was the defending Super DIRTcar Series (SDS) champion’s fourth series win of the season and his first at Fonda Speedway since 1988.

Decker set fast time in qualifying and started fifth in a 31-car field. He passed Hearn for the first time on lap 72 after heavy lapped traffic slowed the leader’s torrid pace.

The “Jersey Jet” had reeled in Stewart Friesen and quickly drawn off to a sizeable lead on lap 34. After his back-and-forth duel with Decker had gone Decker’s way, Hearn was overtaken by Larry Wight and was being pressured by Gary Tomkins when he went up in smoke and slowed on the backstretch, bringing out the third caution.

On the restart, Friesen came back to life and raced past Tomkins and Wight, but he couldn’t ever get to Decker whose winning margin was five car-lengths.

“I’m super happy,” Decker said in victory lane. “The guys made great adjustments on the car. I’d go where they weren’t in traffic. I love to race here and I want to thank all the Fonda fans for their support.”

Wight’s stout podium finish followed up his win at Autodrome Granby. Friesen, who who led laps 13-33 and then slipped back to 6th, overtook him with five laps left. He was trying to equal Jack Johnson’s seasonal record of 12 Fonda wins.

“My car was awesome in the beginning,” Friesen said. “Then it got lazy and then it got going again. Maybe it’s the tires, I don’t know. It was weird, but finishing second to this guy is pretty good.”

Polesitter Gary Tomkins and Tim Fuller did a lot of wheel-to-wheel racing with several different cars to earn the fourth and fifth spots.

Hearn saw his chance to gain ground on Sheppard disappear on his way to the pits for a 26th place finish.

The next time out for the Super DIRTcar Series Big-Block Modifieds will be the “Finale at the Fairgrounds” Syracuse 200 during NAPA Auto Parts Super DIRTWeek XLIV Sunday, October 11.