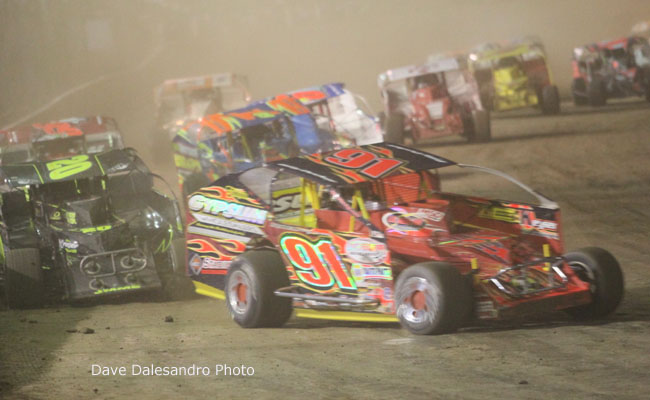 BREWERTON, N.Y. – October 22, 2015 – Billy Decker started on the pole and won the twice rained-out McDonald’s 100 at Brewerton Speedway Thursday, but it wasn’t all that easy.

Decker swapped the lead three times with Brett Hearn before taking the lead for keeps on lap 76 with a hammer down move in the fourth turn that brought him close to the retaining wall. He withstood three late restarts and a green-white-checkered finish to record his fifth series win of the season.

“The “Franklin Flyer” led the first 62 laps – often while negotiating heavy lapped traffic with Hearn hot on his trail. Hearn started eighth, but he was pressing Decker and Whittaker for the lead by lap 12.

Hearn first passed Decker on lap 63 and the back and forth began while Larry Wight and Danny Johnson were dicing and advancing themselves just ahead of another dogfight between Matt Sheppard and Vic Coffey.

Johnson survived contact down the front chute with Wight on lap 89 and went on to finish third. Wight lost a wheel and brought the fifth of six yellows.

“I sent it in there pretty good,” Decker said of his fourth-turn move. “I hit that certain spot where it stuck. If you’re losing ground, you better try something. Thanks to Brewerton for bringing the Series back here.”

Hearn took his near miss in stride. “Billy was a little tight for a while, but he got better at the end. It’s great racing with him.”

Johnson sparred with many on the way to his podium finish, including White, Coffey, Sheppard and Whittaker.

The Super DIRTcar Series returns to action Friday at Weedsport Speedway for time trials and a 35-lap feature leading into Saturday’s $20,000-to-win All Ways 150.

Sunday, the World of Outlaws Sprint Car Series – “The Greatest Show on Dirt”, takes to the Weedsport half-mile at 5 p.m.