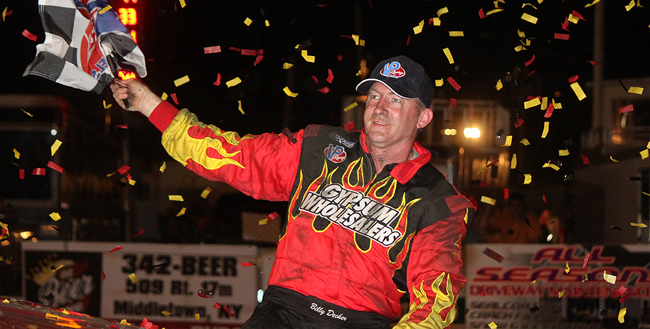 With Orange County Fair Speedway back under the DIRTcar sanction, the Super DIRTcar Series returned to the historic 5/8 mile for the third annual ‘Big Show,’ a 100-lap race promoted by legendary driver Brett Hearn. A field of 49 Big-Block Modifieds filled the pit area to support the event.

Peter Britten and Tim Fuller led the field of 30-cars to the green flag, with Tim Fuller using the outside to grab the early lead. Fuller quickly opened up a big lead over Britten, who began feeling challenges from fourth-place starting Decker.

As Fuller continued to dominate the early stages of the race, Britten and Decker began wowing the crowd as both drivers ran side-by-side for second place. Behind them, Orange County Fair Speedway points leader Tommy Meier and Jimmy Phelps were engaged in a battle for fourth, with Phelps eventually taking the spot.

On lap-18 Decker cleared Britten and began running down Fuller, who was struggling with lapped traffic. Jimmy Phelps, the 2010 winner of ‘The Big Show,’ also began making his presence known as he passed Peter Britten and moved into third.

The first caution flag of the event flew on lap-31, as Jesse Kline came to a stop in turn 3. Fuller had a strong restart, holding off Decker’s challenge, but another caution flew soon after as Tommy Sears had a right rear tire go flat.

The lap-39 restart saw Decker, reminiscent of his last Super DIRTcar Series victory one-week ago at Canandaigua Speedway, use the outside on the restart to grab the lead from Fuller.

Decker, Fuller and Jimmy Phelps began to break away from the rest of the field until problems struck the Troyer Race Cars 98H of Jimmy Phelps on lap-66, ending his night.

As Decker and Fuller negotiated lapped traffic, Tim McCreadie was making a late race charge, getting around Britten to move into the third spot.

Fuller’s best chance to retake the lead came with 25-laps to go, as Matt DeLorenzo and Michael Storms battled side-by-side for position directly in front of leader Decker allowing Fuller to get to the back-bumper of the Gypsum Racing #91. However, a lap-80 caution for Justin Haers coming to a stop gave Decker clean racetrack.

Meier moved into the fourth spot on the restart and tried running down the leaders using his experience as a weekly competitor at Orange County as his guide. A slew of late race cautions repeatedly bunched up the field, but Decker was not to be denied, as he went onto win his second consecutive Super DIRTcar Series Big-Block Modified event.

Both Fuller and McCreadie ran into tire-problems on the final lap of the race, Fuller was able to nurse the car home in fifth, while McCreadie’s car came to a stop in turn 4 before reaching the finish line.

The unfortunate circumstances for McCreadie and Fuller allowed Meier to charge into second place, with Britten, Gary Tomkins, and Fuller rounding out the top-5.

The second and third place finishes, respectively, were the best career Super DIRTcar Series finishes for both Meier and Britten, an Australian native who has been creating a buzz with strong runs in the Northeast.

The Orange County Fair Speedway sportsman division was also in action. Brian Krummel pulled off a last lap slide job on Billy Eggers to pick up the feature win.

The next Big-Block Modified Super DIRTcar Series event will be July 3 at Cornwall Motor Speedway followed July 4 by the Stars & Stripes 100 at Rolling Wheels Raceway Park.

If you can’t be there in person, you can still hear Shane Andrews call the action on the Dirt Radio Network at DIRTVision.com.