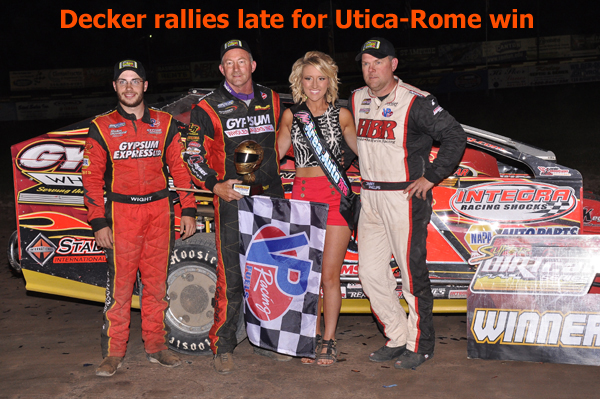 Friesen started on the outside pole and led for 50 laps before yielding to Decker, who had been pressuring him since the halfway mark. Friesen quickly came under attack by eventual runner-up Jimmy Phelps and Larry Wight and crossed the line in fourth, but failed to make weight in post-race inspection and was disqualified.

Erick Rudolph and Billy Dunn officially completed the top five after Friesen’s demise, which was brought about in part by nine restarts and the resultant use of fuel.

Despite the nine cautions, mostly for deflating tires rather than wrecks, the race was action-packed with lots of passing and surges back up through the field by the likes of Wight, Dunn and Danny Johnson, all of whom pitted for tires.

Decker started 11th and advanced to third by lap 27 when Dunn fell off the pace and brought out the 5th caution. He got to Friesen’s quarter-panel under green for the first time on lap 37 and a dogfight ensued while Phelps and Wight diced a few car-lengths back.

“It was a tough race, but we had a good race horse from the heat race on,” Decker said. “As the track cleaned up, you could see a better line and the bottom got better in 3 and 4 late in the race.”

Decker said he was glad the Series had returned to Utica-Rome after a12-year absence.

“I’m glad to be back here,” he said. “This is a track where you can come from anyplace and win if your car’s good enough.”

Phelps started 9th and was soon in the top-five to stay. “Larry (Wight) woke me up and we got to racing,” he said. “I could go to the top when I had to, but I just felt better with the low line.”

Friesen set fast time in qualifying and continually drew away from all comers for the first seven restarts. “I think I would have been all right without all the cautions,” he said. “It is what it is.”

Rudolph was strong and steady as the fourth-place finisher. Dunn drove a valiant race to break into the top-five after returning in 23rd after a tire change on lap 27.