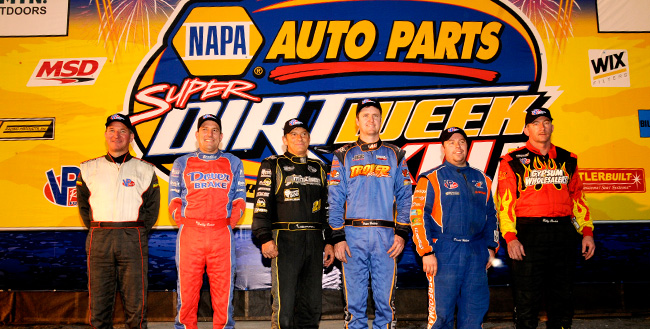 Britten was the 21st car to qualify, knocking Hearn from the top spot at that point. Britten then waited … and waited … and waited to see if his lap of 33.330 seconds would last through the end of time trials. He almost made it. Decker and Hebert were among the final five qualifiers, but they posted the two quickest times of the day.

“I didn’t even expect to stay in the top six,” said Britten, who won the Big-Block Futures Race last year in his first attempt at NAPA Auto Parts Super DIRT Week. “You see how these things go. Normally the guys keep coming and coming and coming later on, and they just never did. We kept watching, we got the qualifying list and looking over at the guys to come and they were dropping off and you start thinking, ‘Maybe. Maybe.’ Then Billy Decker comes out. He’s got so many laps around here. To get beat by him, and then right at the end by David Hebert, I’ll take that, third place in my second time here. It’s kind of disappointing when you stay in the number one spot for so long, but third place is awesome for us. Hopefully now that we’re locked in there’s less pressure and we can concentrate on getting better for Sunday.”

Qualifying time trials for the Gander Mountain 150 358-Modified event will be run on Friday morning.