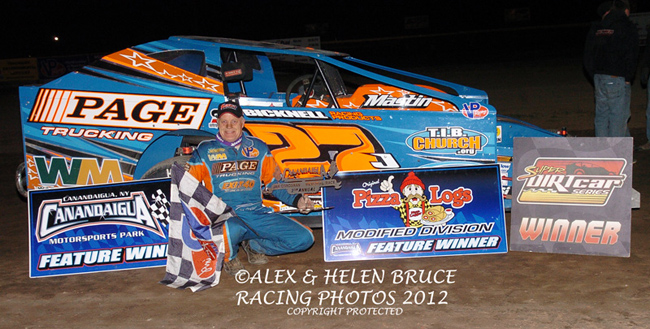 Buckled in behind the wheel of the blue #27J Page Trucking-Honeoye Auto Parts-Waste Management/Bicknell entry equipped with a Mike Mastin-prepared powerplant, Johnson dominated the 2nd Annual Jan Corcoran Memorial to kick off the 2012 Super DIRTcar Series points chase and collect a hefty first-place prize of $6,400 in the 64-lap Modified main event.

“To win the final two shows last year and come out and win tonight is just awesome,” said Johnson, 52, following his 73rd career Big-Block Modified victory at Canandaigua and 71st in series competition. “What a great hotrod I had tonight, can’t thank all the guys that work on this car enough.

“The car was really good tonight, to be honest, I couldn’t believe it could be so good out there. It was certainly a pleasure to drive the way things turned out, getting to the front fast and being able to stay there.”

Johnson held off a late-race rally by rival Brett Hearn, the only driver taking home more Super DIRTcar Series trophies (107) than Johnson, a second-generation racer from nearby Rochester.

Johnson led Hearn across the stripe by a comfortable dozen car-lengths while fairgrounds front-runners Justin Haers and Matt Sheppard swapped spots on the last lap to salvage third and fourth on the final scoresheet. Series star Jimmy Phelps rounded out the Top-5 after starting 10th.

Looking to improve on his third-place finish in last June’s inaugural Corcoran Memorial, popular pilot Tim McCreadie charged past pole-sitter Larry Wight on the opening circuit with Johnson following the same outside line after starting fourth on the 31-car grid. The ‘Doctor’ shadowed McCreadie in Vinny Salerno’s Four Star/TEO mount, ducking underneath to forge the final lead change as the talented twosome reached the end of the back chute on lap seven.

It took Johnson only 10 times around the ultra-smooth oval to reach traffic and with 18 complete had left 25 drivers on the lead lap. With a third of the race scored, he opened up a commanding lead over Wight and fast time trialer Justin Haers while McCreadie, Sheppard and Phelps battled three-wide further back.

The capacity crowd on hand for the track’s 49th annual opener, honoring promoter Jeremie Corcoran’s mother, got a short break to catch its breath when former Canandaigua regular Tim Fuller slowed on lap 35 to incur the initial caution. Sheppard took advantage on the ensuing restart and grabbed second from Wight while Haers and Phelps continued to figure in the front-five ahead of 17th starting and surging Hearn.

Back under green with plenty of heat in his tires, Hearn sped past Phelps for fifth on lap 38, dropped Haers into fourth on lap 39 and snatched third away from Wight on lap 40 before Billy Dunn suffered a flat right-rear tire to force out a second yellow flag on lap 43. Phelps stole third from Hearn on the restart but Hearn quickly regained the show position on lap 47 and wrestled away second from ‘Super Matt’ by the end of lap 51.

Turn three contact suddenly slowed Chad Homan off the pace, resulting in the fourth and final caution period with just a handful of laps left and affording Hearn his last clean shot at overtaking Johnson. But that was the closest the ‘Corporate Jet’ could get as Johnson pulled away for his first sixth tour triumph in Canandaigua.

“It seemed like a long race to hold the lead, I just kept seeing second-place changing (scoreboard) and didn’t know what I was going to have to compete with at the end,” added Johnson, who last won a series show at Canandaigua steering the potent Freightliner Trucking no. 6 machine to a convincing victory in 1995, that year leading the entire 95-lap distance and in another flawless performance.

“We got a new sponsor – Page Trucking – and it’s all coming together well for us right now. Mike (Payne, crew chief), Doug (Dulen) at Honeoye Auto and everybody that helps out is the reason we’re here in victory lane tonight,” said Johnson, who opened the season with a win in Florida during February to start the string.

Seven-time overall Mr. DIRTcar titlist Hearn was content with his 2102 series debut aboard the BH Racing Enterprises #20 Madsen Motorsports-Don Kruger Motorsports/TEO ride, coming up just short in his bid for a fourth series win in Canandaigua.

“Been so darn close here, car was awesome tonight running really well come feature time,” said Hearn, 53, who finished second to Billy Decker in last June’s first Corcoran Memorial. “We started so far back and worked our way to the front with very little help and had a really good car right there right up until the end.

“On that last restart (lap 59) the motor went sour. Thought it was going to shut off going through (turns) three and four, then it cleared out a little but still kept back-firing. Something happened but I’m not really sure if horsepower would’ve been the answer anyway. The 27J car was fast tonight, don’t think we had anything for him but I still feel pleased with such a strong run.”

Despite besting 41 open-wheel entries in time trials and placing second to Decker in his qualifying heat, luck of the draw put Haers outside row three to start the 64-lap headline event and ultimately just out of reach of that first career series victory.

“The car would go on some restarts, on others the tires just wouldn’t go,” said Haers, 31, who finished runner-up to Sheppard in the final 2011 CMP point standings and added a pair of feature wins along the way strapped into the Haers Bros. Racing #3 Phelps Cement Products-Sweeteners Plus-Classics & Customs/Bicknell mount. “That last restart we didn’t go, but then got some heat in (tires) and started coming forward. Matt and me got together a little bit in turn four but that’s a racing deal.

“This is our first race of the year, a lot of the guys here have already run a couple so we’re pretty happy. Right out of the box to come and set fast time and pretty much be in contention for a win the whole race is definitely something to build on.”

Round two of the 2012 Super DIRTcar Series moves to the forefront during the first holiday of the race season with Rolling Wheels Raceway Park in Elbridge, N.Y., hosting All-Star Weekend on Sunday, May 27.