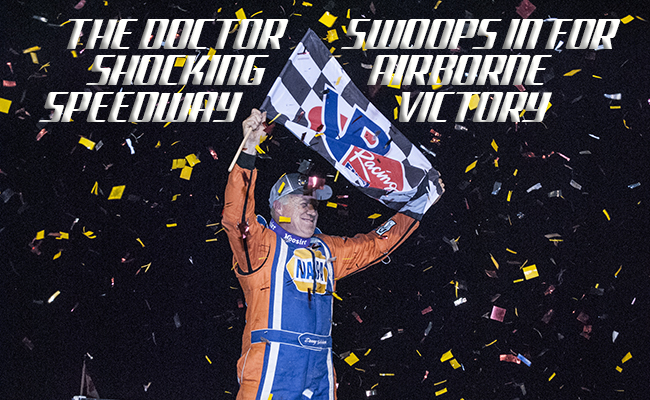 PLATTSBURGH, NY – July 31, 2018 – The defending Super DIRTcar Series Champion, NAPA Super DIRT Week XLVI Champion, and current Championship points leader had the fastest car at Airborne Park Speedway in Hot Laps, Time-Trials, and 98/100 laps of the Battle of Plattsburgh 100. But then, on a lap 98 restart, The Doctor Danny Johnson, racing the Ray Graham no. 21G Big-Block Modified, went to the bottom of the track in turn one and passed Matt Sheppard down the backstretch for the win. Max McLaughlin the HBR Motorsports no. 6H grabbed the final podium stop after battling in the top five all race. Erick Rudolph, who spent most of the night chasing Sheppard in second place, seemed to lose some speed and fell back to the fourth position to end the night.

After a violent accident at Orange County Fair Speedway in his familiar orange 27J, Danny Johnson found himself without an operating Big-Block Modified. First Tyler Siri stepped up and offered a ride, which Johnson used to stay in the points hunt. Now Johnson and car owner Ray Graham have come to terms for Johnson to race the Troyer chassis no. 21G for the remainder of the season. It hasn’t taken long for The Doctor to settle in. After starting seventh, Johnson steadily moved his way up through the field until he reached the second place running Erick Rudolph in the no. 25R. Johnson and Rudolph battled for the second highest step on the podium for most of the race.

Unfortunately for Rudolph, as his right rear appeared to be giving up the ghost, Johnson’s came alive in the closing stages of the 100-lap Battle of Plattsburgh. Johnson made his way around Rudolph with less than 10 laps to go. The no. 21G appeared to be reeling in the leader Matt Sheppard, but the laps were running out. That’s when Johnson’s big break came. Brett Hearn’s stricken no. 20 came to a stop trying to reach the pit area in turn one. As his racing machine was in a dangerous position, flagger Dave Farney was forced to wave the yellow flag.

In Victory Lane Johnson noted, “Well yeah the caution came out there and gave me a chance to come up on his [Sheppard’s] bumper. He chose the high lane. I went down to the bottom. The car stuck and the rest is history.” This is the second Series win in 2018 for Johnson. “It’s great for my team. I appreciate Ray Graham and Peter Britten for allowing me to get into their team. This [ride] is supposed to be for the remainder of the season. I gotta thank Billy Colton and Kevin Enders for helping us get the car ready last night. They were at the shop with the rest of the crew. It was a great effort.”

In racing, for every unexpected triumph, comes a crushing defeat. Matt Sheppard started the night out right with a Billy Whittaker Cars & Trux Fast-Time Award and a Heat Race win. Perhaps Sheppard used up his luck as he drew the pole position in the Dig Safely NY 811 Redraw. “Starting on the pole, sometimes that’s good, sometimes that’s bad. I knew the top [line] would probably give up sooner or later. I thought we were gonna make it to the finish but that caution at the end undid us.

Brett Hearn was in and out of the pit area several times throughout the race, but finally something mechanical let go with two laps to go, setting up Johnson’s pass for the lead on the restart.
“The crowd probably witnessed something that’ll never happen again, and that’s Danny [Johnson] thanking Brett Hearn,” drawing a chuckle from the crowd.

Sheppard chalked up tire choice as the difference between first and second. Sheppard conceded, “He had a really good race car at the end. It looked like he went with a little softer tire actually, which was probably the right move in the black slick. All in all, first trip here, super-fast all night. We almost brought it home. We were just a little short.”

Max McLaughlin came into the race third in points, chasing Matt Sheppard and Erick Rudolph. McLaughlin was able to dispatch Rudolph in the late stages for third but failed to match the speed of the other two leaders.

“We struggled at the beginning of the race and I found that bottom groove early. I kinda stuck there all night. It was good on the tires so it allowed us to be there at the end. We had a really good car. The Teo Pro Car has really come on halfway through this year, this whole year pretty much. We’ve had a couple wins, and we’re knocking on the door of our first Series win. I like the bottom anywhere I go. Anywhere I can make the bottom work means a pretty good finish for us. I guess you can call me a bottom feeder.”

Intensity Will Be High When Super DIRTcar Series Battles Sept. 2 at Weedsport