Danny Johnson is King of the Hill 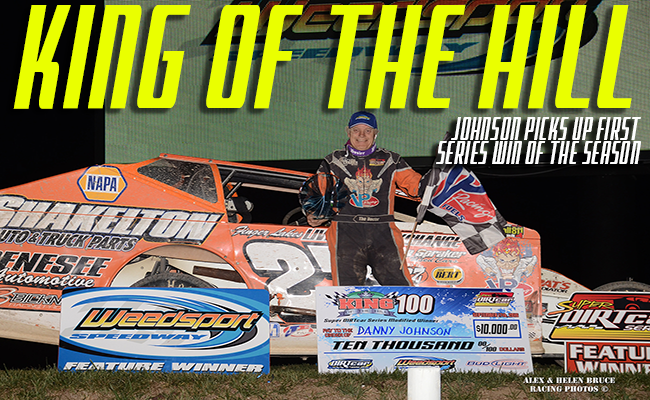 Danny Johnson is King of the Hill

Picks up first series win of the season

WEEDSPORT, N.Y. – Sept. 17, 2016 – Danny Johnson picked up his first Super DIRTcar Series victory of the season in the Shakelton Auto and Truck Parts No. 27J and collected his 80th series win Saturday night at Weedsport Speedway. Johnson battled Tim Fuller early for the lead but sailed away to take the King of the Hill 100 and take home the $10,000 payday over Matt Sheppard and Fuller.

“We had a good race with Timmy Fuller. I love racing with Timmy, he’s a good, clean racer,” Johnson said. “We raced side-by-side and I was able to get ahead of him that lap there when I got to the bottom and was then able to pull away from him. I’d like to thank my car owner Chris Gennarelli, my engine builder as well as my boys for getting it ready and everyone who has helped us out.”

Mat Williamson and Tim Kerr drew the front row in the Dig Safely redraw and brought the 31-car field to the initial green flag.

Kerr jumped out to an early lead over Fuller and Johnson. Just as Fuller and Johnson started to put pressure on Kerr for the top spot the first caution of the night came out on lap 11 due to a right rear flying off of sixth place starter Rob Bellinger’s car.

Fuller took advantage of the lap 22 restart and took the lead from Kerr. Johnson then advanced into the second spot from Kerr and then snuck up to Fuller’s rear bumper as he started to put pressure on Fuller.

Johnson took the lead over Fuller coming off of turn four on lap 28 but Fuller didn’t give up as they battled side-by-side for several laps, swapping first and second.

Tenth starter Sheppard made his way into the top three by lap 33 and slowly gained ground on the leaders.

Six cars piled up going into turn one on lap 37 bringing out the second caution of the night. Brett Hearn and Ryan Phelps were two of the drivers involved that received extensive damage on their cars forcing them to go pit side.

Wight took advantage of the lap 45 restart as he took back the third spot from Sheppard. Wight drove by Fuller on the outside coming out of turn four for the second position the next lap by.

Johnson led his No. 27J small block modified to the halfway mark over Wight, Fuller, Sheppard and Peter Britten.

Fuller and Sheppard were knocking on Wight’s doors as Sheppard took third from Fuller on lap 58.

Johnson caught the back of the field on lap 60 as he showed a straightaway over second place runner Wight.

Wight changed his lane and moved to the top in turns one and two allowing Sheppard to drive underneath and take over second on lap 63.

Sheppard soon found his way into lap traffic as he worked his way around the top of the track to gain ground on Johnson.

Wight fell off the pace allowing Fuller and Friesen to go by for the third and fourth spot.

Johnson edged his way through heavy lap traffic building a strong lead of 2.067 seconds over Sheppard.

After a hard wreck at Brewerton Speedway the night before Johnson made a strong comeback to capture his 80th Super DIRTcar Series victory and collect the $10,000 payday at Weedsport Speedway over Sheppard, Fuller, Friesen and Wight.

“I watched the 9s come up on the leader board into second. I didn’t want to give him a chance so I went as fast as I could. I had no idea how much of a lead I had. All I knew was, whoever was in second, especially Matt, wanted to be first.”

After a streak of four wins in a row Sheppard was disappointed with how the race turned out but was happy for Johnson and his team.

“We didn’t draw a great number. It was kind of the same deal as last night and then worked our way through the front. We had a really good car but didn’t have anything for Danny tonight. Hats off to Danny, he needed this win.”

After a hard fought battle between him and Johnson for the lead early on, Fuller fell back a few spots but came back through late in the race to finish third.

“We were really good in the beginning then Danny lined up beside us with that small block and I think he was toying with us having a small block. We weren’t that good. I would say around lap twenty or thirty he got us. I went back a few more spots then my car got good enough again towards the end of the race. I think the car was good enough to be second but not to beat Danny.”

Race Notes: 40 modifieds attempted to qualify and 31 started the feature. Two cautions were brought out during the feature on lap 11 and lap 37. Johnson collected his 80th Super DIRTcar Series victory.

The Super DIRTcar Series will be making their first trip of the season to Fonda Speedway on Saturday, Sept. 24th.