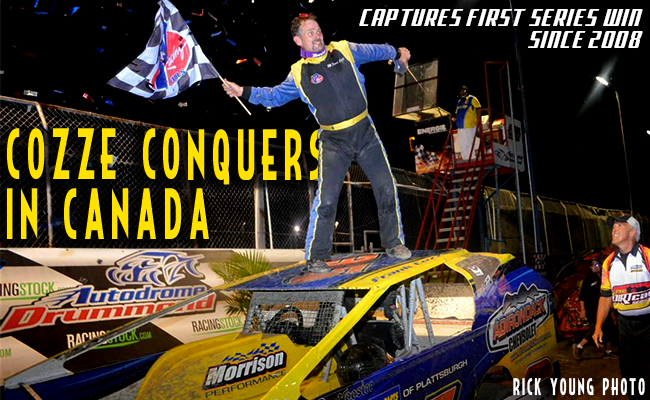 DRUMMONDVILLE, Q.C. – July 26, 2016 – It had been eight years since Frank Cozze had seen victory lane with the Super DIRTcar Series Big-Block Modifieds. Cozze proved on Tuesday night at Autodrome Drummond that he still has what it takes as he came from his 19th starting position to take home the win over Larry Wight and Mike Mahaney.

“When you’re 60, any win anywhere feels good,” Cozze said in victory lane. “I want to thank my car owner, all of my sponsors, and all of my guys. My guys have been faithful to me for many years. I’m glad they’re here for this first one. My tire guy never misses a beat and I think that’s why we’ve been pretty consistent this year. He’s on the ball. So I want to thank all of those people who put their hard work into it. I’m glad to call them my team.”

Billy Decker and Brett Hearn brought the 30-car field to the green. Once the green flag dropped, Hearn overtook Decker as Hearn pulled away to an early lead.

A restart on lap 21 saw Wight charging off of the bottom of turn two as he drove past Decker for the second spot.

Nineteenth starter Cozze was into the fourth position by lap 32 as he began to pressure third place runner, Stewart Friesen.

Hearn was running the outside lane as Wight patiently worked the bottom groove and reeled Hearn in to capture the lead on lap 35.

Wight caught the back of the field on lap 39 but was soon halted as the fifth caution of the night was brought out on lap 40.

On the restart, Friesen dove into turn two on lap 44 underneath Hearn and captured second spot.

Cozze claimed second spot from Friesen on lap 53 then slowly dug at the bottom to gain ground on Wight as he pulled away from Friesen. Cozze threw it into turn three as hard as he could and was able to capture the lead coming out of turn four to then pull away from Wight on lap 64.

Wight was not giving up without a fight as tension built for that top spot. Cozze and Wight battled wheel-to-wheel for several laps.

Cozze again caught the back of the field on lap 73 as he had six car lengths over Wight. Using the top and bottom grooves to his advantage, Cozze sliced his way through lapped traffic.

The eighth restart of the night was on lap 80 as the crowd saw Cozze bring the field back to the green.

Wight and Mahaney battled for second spot in lapped traffic but it was Wight who held on by inches for the second spot.

“We had a really good car,” Wight said. “We fired early and were able to get the lead and not waste any time. I think Frank had a better car. He was able to get around us on the outside. Once he found the bottom it was hard to run him back down. This Bicknell car we just switched to this Friday hopefully can help us keep our momentum going.”

Third-place finisher Mike Mahaney, who started in 11th, was ecstatic with his finish.

“We didn’t have a very good redraw. To come up from 11th to third in a Series race feels good to me. This is our local big-block that we run every week. It’s our first top three for me and it feels good.” Mahaney said. “I want to thank everybody who helps me out. It’s just me and my dad tonight, feels special to have that bond. To come up here just the two of us to Canada, it’s special to me. I can’t thank him enough.”

Cozze’s best finish at Autodrome Drummond came in 1995 when he finished in second place to Steve Payne.

“The last time I was here I was in a sprint car some years back but in the modified it’s probably been since 2006 or 2007,” Cozze said. “I think the last time we were here I got third, and was four pounds light at the scale.

“This track is about as challenging as you’re going to get. I ran my butt off those 100 laps as best as I could. Tomorrow at Granby is a little bit different deal but I have a group of good guys and a good car. So hopefully we will be okay.”

Race Notes: 41 cars attempted to qualify. Billy Decker set fastest time overall with a 16.600 picking up the Pole Position Raceway fast time award. After an incredible firework show the top 30 cars were brought out to the front of the grandstands and were introduced individually in front of a packed house. Sheppard who was the points leader going into the night qualified through the last chance showdown, started 22nd in the feature and finished eighth. There were eight cautions brought out during the 100-lap main event.

The Super DIRTcar Series returns to action in Quebec, Canada on Wednesday, July 27 at Autodrome Granby.