Brett “The Jet” Hearn Lights the Afterburners at the World Finals 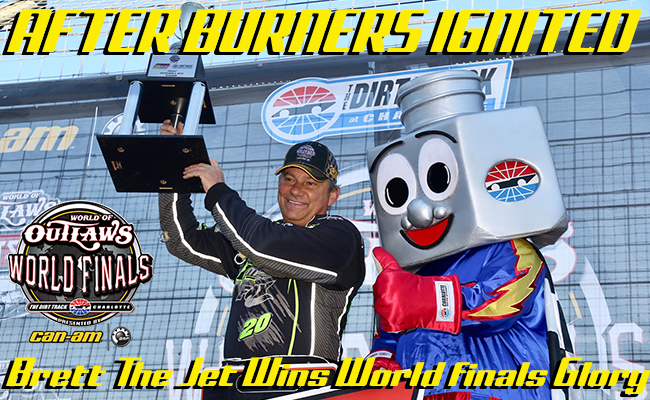 Brett “The Jet” Hearn Lights the Afterburners at the World Finals

CONCORD, NC – November 3, 2018 – The first 40-lap World of Outlaws World Finals presented by Can-Am Feature race went to Brett The Jet Hearn. Hearn worked his way into second, and then benefited from a flat right rear tire on Matt Sheppard. Incredibly Sheppard passed most of the field and managed a third-place finish. Hard-Charger Tim McCreadie started twenty-fifth and finished runner-up to The Jet.

The race suffered a high rate of attrition as the day-time track conditions tore into right and left rear Hoosier racing tires, bringing out the caution flag multiple times. Race-winner Brett Hearn kept his nose clean and had a little luck getting out in front. “Being at the front of the pack was a huge advantage. When Matt (Sheppard) got that flat I got out in front and it was really helpful being in clean air. I was able to run laps out front and take care of things a little bit.”

The track proved to be a test for Hearn despite the winning. He noted, “I gotta rest my arms, that’s a tough race track to run. You don’t want to see that many restarts when you are leading.”

Madsen Motorsports prepared an excellent Big-Block Modified for him, “The car really liked the high side, I got a couple good restarts. I got under the no. 19 [Jessy Mueller] and then I was in the right spot when Matt [Sheppard] blew the tire. After that I just had to make the right moves and make the right guesses on the restarts, choose the right lane, and not make any mistakes.”

Matt Sheppard extended his points lead out to sixty points with his third-place finish. Super Matt built a comfortable lead early in the race before a flat left rear tire sent him to the work area. “I kinda thought we were out in front on cruise control, but for some reason we just can’t catch any breaks this year. I’ve had seven flat tires in Series races this year.

Against all odds Sheppard drove through the field and took the final spot on the podium. “Once again the car was really fast, really good, and I’m thankful to salvage a third and have the thing still rolling,” said Sheppard.

“We had the car to beat but it just wasn’t meant to be,” but building on his Championship points lead on Erick Rudolph was key. Sheppard goes into the final Feature race of 2018 with a comfortable 60 point lead.