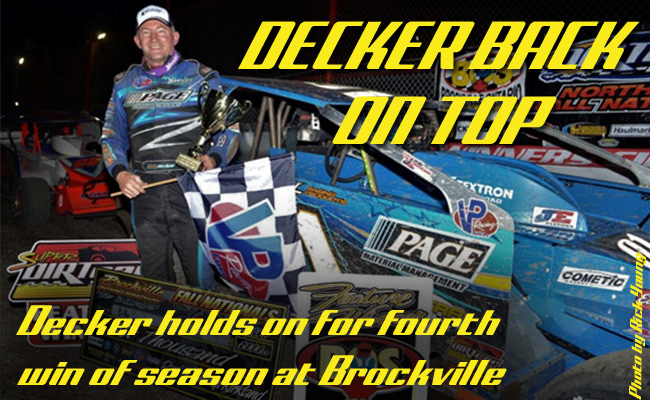 Billy Decker charges to win at the Fall Nationals in Brockville!

BROCKVILLE, ONT, CAN – OCTOBER 13, 2017 – One driver was on a mission as the Super DIRTcar Series kicked off the 9th annual Falls Nationals at Brockville. Losing the lead in the early portion, Billy Decker never let off Jimmy Phelps and made a late race pass en route to win #4 on the Series this season.

‘’It has been a long time coming!’’ said Decker getting a first win since Eldora back in July. ‘’The car was really good even though we struggled on the bottom groove, again the track changed as we were hammering pretty hard, it was a lot of fun!’’ added Decker as the top part of the track was good for the majority of driver throughout the race.

Coming into Brockville with a 46-point deficit over Matt Sheppard, Decker is looking forward to the World Finals at Charlotte: ‘’Every night we go out and swing at it, we want to win every race and Charlotte will be no different!’’ said Decker who reduced the margin by a few points as Sheppard came in third.

Leading the way for a great part of the feature, Jimmy Phelps was happy to bring his potent 98H into second: ‘’The car was tight up, Billy was pretty good at the end, we were good but not good enough tonight’’ mentioned Phelps who reminded the different scenario that occurred last year: ‘’This is the car we tore up here last year, we rebuild it over the winter and here we are!’’

After a magical NAPA Auto Parts Super DIRT Week at Oswego, Matt Sheppard was satisfied with his third-place finish: ‘’We got up there, we were everywhere behind the leader, it was a matter of Billy or myself to pass Phelps first to take the lead, hats off to Billy for his good race’’

With the season ending in a few weeks at Charlotte; Sheppard will be the man to watch having a slight lead over Decker in the point standing: ‘’Charlotte is a wild card, you never know what will happen there’’ said Sheppard.

Billy Decker charged to the lead in the 1000 Island RV Falls Nationals 1000, as Jimmy Phelps and Matt Sheppard quickly making their way into the top 3 within the first few laps as Ryan Arbuthnot and Steve Bernard where also in the mix.

Lap traffic became a factor with a quarter of the race done and this enabled Phelps to grab the lead coming off turn 4 on lap 30. Phelps led the way in front as Decker and Sheppard stayed within tight distance of the 98H.

As the race was able to pick up some momentum, the front 3 drivers stayed together as both Decker and Phelps were waiting for an error from the leader.

In the late portion of the race, traffic was again an influence as Decker was able to regain the lead, the driver of the #91 never looked back and went on to capture his fourth win of the season in front of Phelps and Sheppard. Ryan Arbuthnot and Danny Johnson completed the podium.

The Super DIRTcar Series will take a few weeks pause before heading in the season finale at the Dirt track in Charlotte as all roads leads to the World Finals. An epic battle is shaping up between Sheppard and Decker to crown the 2017 Series champion!