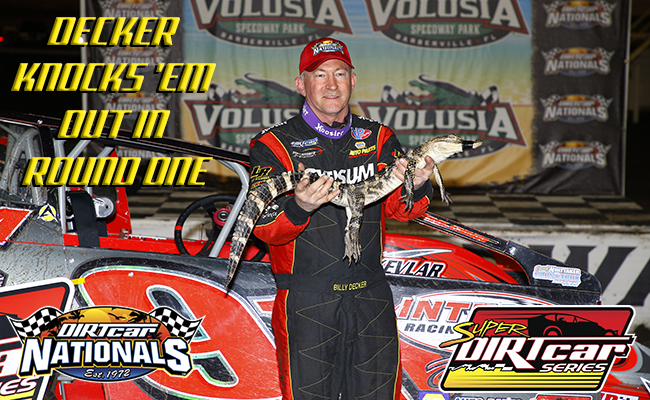 Billy Decker Christens his Return to Gypsum Racing with a Win, Edges Out Teammate Larry Wight

BARBERVILLE, FL – February 13, 2019 – It took just one race for Billy Decker to return to his winning ways in the famous red No. 91 Gypsum Express Big-Block Modified, there was nothing easy about it on Wednesday night in DIRTcar Nationals at Volusia Speedway Park. Not only did Decker, of Unadilla, NY, hold off teammate and reigning NAPA Super DIRT Week Champion Larry Wight, but he was forced to out-muscle legendary Billy Pauch to come away with the checkered flag. Wight and Pauch ran side-by-side for nearly half the race while trying to run down Decker.

The Gypsum Express teammates locked out the front row to start the 30-lap Feature. In the first few furious laps, Wight was able to get wound up on the high side and pass Decker for the lead. Undeterred, Decker stayed in his tracks until Wight made a mistake by jumping the cushion, which sent his car scraping along the turn three wall and dropping him to fifth.

Meanwhile, Anthony Perrego impressed in his Graham Racing debut, getting as high as second behind Decker. He diced it up in the top three before slipping to fourth late in the race. Defending Super DIRTcar Series Champion Matt Sheppard looked to have the fastest car on the track, and reeled in Decker. Sheppard challenged Decker on the bottom of turn three on Lap 13, but Decker was unaware of his position on Sheppard and unwittingly crossed over the nose of the No. 9s and caused him spin out in front of the field. Fortunately, the quick reflexes of Starter Dave Farney and prompt communication by Race Director John Nelson together with heads up driving by the field prevented anybody else from becoming involved as Sheppard spun to a stop.

“I came over Matt’s nose once getting into [turn] three there, trying to get to the bottom, and I never saw him. I just got on his right front and he got turned around,” Decker said.
After a series of cautions around the halfway point for flat tires and other mechanical issues, Wight mounted a charge through the top five. The last five laps contained a colossal battle between Decker, Wight and Pauch. Wight jabbed at Decker on the low-side, showing him a wheel, while Pauch roared around on the cushion, but Decker proved too good and held on for the win.

Despite the trip the Victory Lane, Decker believes his car can be even better.

“I don’t think I was as good as I needed to be. When I hit it right, I thought I had a pretty good race car. It was a pretty fine line for me and I missed it a lot of times. When I hit it really good, it was really good. I think there at the end, the track was changing a little bit so the checkered couldn’t come soon enough,” he noted.

Decker describes the final stages of the race: “With five to go, when I missed it in three, I thought I’d see him sneak underneath me there, but I got the left rear down on that traction and got back away from him. I knew it was going to be close, because on that last lap I tried to come down across that lap car I was wrestling with, and I missed the left rear on the bottom, and I ended up in the middle, so I had to catch all the traction I could. I knew it was going to be tight.”

Wight fell just short of passing his Gypsum Racing teammate, however he believes he had the car to beat. “We were just a little bit too tight. We tightened the car up with the track bar expecting the track to go away. It just didn’t go away fast enough. It needed just a few minor adjustments to get it to turn a little better. I feel we definitely had the fastest car,” Wight said confidently.

Wight praised the DIRTcar Nationals track crew: “I think the track’s been pretty consistent all week. The track crew, Larry and Eric, have been doing an incredible job. They really know how to do a track, whether it’s New York or Florida.”

Third place finisher Billy The Kid Pauch, a three-time champion of the Florida Tour for the Big-Block Modifieds dating back to 1985, is as ageless as his knick-name. It’s obvious he came to the 2019 DIRTcar Nationals on a mission. Pauch battled some adversity to keep his podium position, but knows he had a shot at the win.

“I was trying the bottom, the middle, here, there, everywhere, and I just feel more comfortable up top there. I thought we had a shot at it. I got up to Decker and he was misting oil or something. I couldn’t see, or maybe it was me, I’m running a little hot [gesturing to the steam escaping from under the hood]. Maybe it was my car. I was getting mist in my face and it was hard to hit my marks. That made it tough, but we were in the hunt,” said Pauch.

Before round two Pauch’s team will work on making some changes to the good for round two. “We need to get our car freer. I kept freeing it up during the race with the rear panhard, and it got better and better. I couldn’t get the car free enough. I had to back it into the turn to get it to turn. I had to drive extra hard to get it to turn.”
You can still catch three more nights of DIRTcar Nationals action at Volusia Speedway Park featuring the Super DIRTcar Series Big-Block Modifieds and the World of Outlaws Morton Buildings Late Models Thursday through Sunday.

If you can’t make it to the speedway, be sure to tune in live and in HD on www.DIRTVision.com.