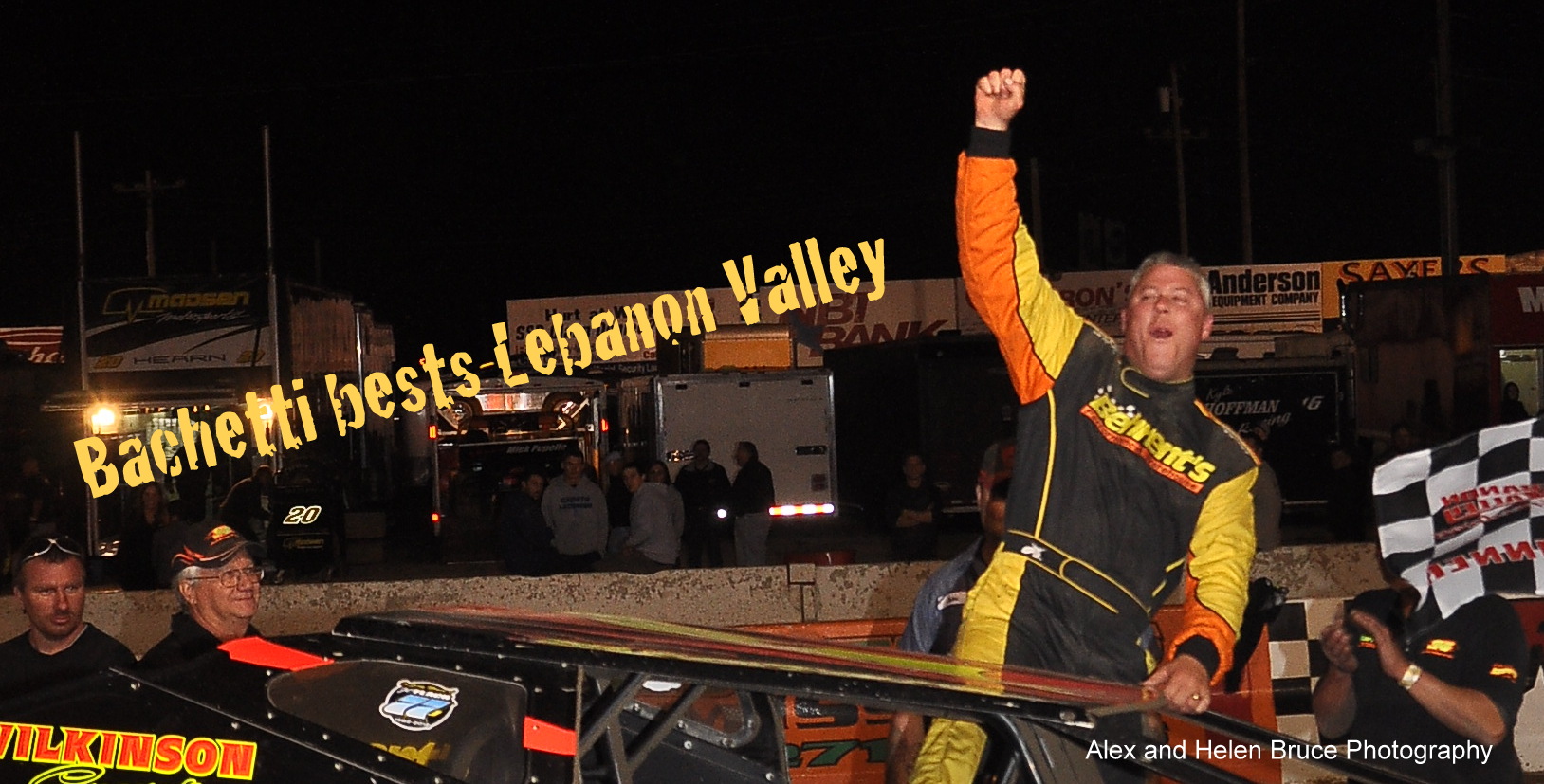 WEST LEBANON, N. Y. – With three wins at Lebanon Valley Speedway already under his belt, Andy Bachetti, of Great Barrington, Mass., has been strong all season at his home track, and Thursday’s 100-lap “Mr. DIRT Track U.S.A.” for the Super DIRTcar Big-Block Modified Series was no different. Against a competitive field, Backetti seemed to effortlessly cruise to Victory Lane at “The Valley of Speed” Thursday, Aug. 15, taking home the hefty $17,500 winner’s share.

“The pressure was on,” said Bachetti, who, after placing second in his heat, redrew the pole and started the race on the outside front row. “It was definitely mine to win or lose, starting there. We just had to conserve and be consistent and keep everything underneath us.”

Despite challenges from local racer J.R. Heffner, of Pittsford, Mass., on restarts, Bachetti stayed ahead, often establishing a significant ten-plus car-length lead soon after each green flag. Unbeknownst to onlookers, he encountered troubles in lap 97, with just three laps to go.

“I didn’t think I was going to make it,” said Bachetti. “It was sputtering and skipping there, I didn’t know what was happening, I thought I was running out of fuel, and I go ‘no way.'”

It sputtered but never slowed, and Bachetti led all 100 laps to the checkered. Heffner came up second after successfully battling Brett Hearn for the position in the first lap and maintaining the position the rest of the race.

Hearn finished third, but his 100 laps wasn’t nearly as drama-free as it was for his podium companions. The Sussex, N. J., star started the race on the inside pole after a strong showing in qualifying rounds, clocking the fastest time trial lap at 19.693 seconds and winning his heat over Heffner. The defending “Mr. DIRT Track U.S.A.” Champion and current Super DIRTcar Series point leader hoped to repeat the success he had last year, when he charged from a 23rd starting position to pick up the win.

However, plenty of challenges were in store for the grueling 100-lapper on the high-banked half-mile. Hearn fell from second to third in the first lap with Heffner taking the second spot. Jimmy Horton, of Neshanic Station, N. J., brought out the first caution of the race in lap 4 with the No. 5 popped a flat. The three leaders, Bachetti, Heffner and Hearn, kept their positions off the restart followed by Billy Decker in fourth.

The No. 55 of Mike King succumbed to a flat in lap 10, but was able to pit without bringing caution to the track. The next yellow flag came in lap 18 with Donnie Correlis spun in turn 3. Hearn gained momentum on the subsequent double-file restart and challenged Heffner for second, trying first on the top of the track and switching to the bottom, but unable to get around the 74. In lap 27, a flat tire brought Hearn to the pits and brought caution to the field.

Hearn returned to the track at the tail of the field, leaving Decker in third, Kenny Tremont in fourth, and Mark Flach in fifth. Bachetti sped ahead, establishing a hefty lead between himself and Heffner, but a lap 42 caution brought by Tim Currier brought the field back together. Heffner challenged Bachetti from the inside groove on the restart, keeping up with him the full length of the front stretch, but Bachetti was fast enough on the turns to keep the lead.

Yellow flag conditions returned again in lap 48 due to a turn-four tangle involving Matt Billings. Hearn, who in 18 laps had made his way from the rear of the field to the 20th spot, pit under caution to make some adjustments. He returned to the field stronger than ever, and steadily worked his way forward.

A right rear flat on the No. 8 of Rich Scagliotta brought yellow flag conditions back to the track, and Kolby Schroeder took the opportunity at the restart to battle Tremont for third. Billy Dunn charged ahead at the green, passing Jimmy Phelps for the fifth spot.

In lap 66, Tremont slowed on the back stretch to bring caution to the track. Again strong on the restart, Dunn claimed the third position over Schroeder. Behind them, Hearn had made his way from the back of the pack to the top-ten, and was battling three-time defending Super DIRTcar Series Champion Matt Sheppard for eighth.

By lap 80, Hearn had made his way around Sheppard and was working his way past Pete Britten in seventh. Britten bobbled slightly in turn 2, just enough for Hearn to get by. Steadily gaining ground, Hearn approached Schroeder, Phelps, and Jimmy Burns, all in a tight race for the fourth, fifth and sixth positions. Hearn took Burns in lap 90 and Phelps in lap 94 to crack the top-five.

Bachetti and Heffner, still leading, raced through lapped cars until a late-race caution in lap 97 brought the field back together. Strong off the restart, Hearn claimed fourth and gained enough momentum to successfully challenge Dunn for third. Hearn had his eyes on the $17,500 prize, but with only three laps to go could not gain enough ground to pass Heffner and Bachetti.

“We were riding there in third, looking for a way to get into second, and we were hoping we had a pretty good chance on it,” Hearn continued. “Then we clipped the left rear, and just threw every strategy out the window and started all over again. We changed the left rear and we tried to go out there again. We were just okay, and we had to make one more adjustment on the front rear.”

Although Hearn was unable to claim another prestigious “Mr. DIRT Track U.S.A.” win, his strong performance keeps him in the series point lead over defending series champion Sheppard.

Watertown’s Dunn finished third after starting 15th to claim his fourth top-five finish of the season in Super DIRTcar Series events. Also a hard-charger, Schroeder started 23rd in the field and finished fifth. Phelps, of Baldwinsville, N. Y., started and finished sixth and Burns, of Delanson, N. Y., took seventh after starting ninth. Rounding out the top ten are Sheppard, who started 21st, in eighth, Danny Johnson in ninth, and Pete Britten in tenth.