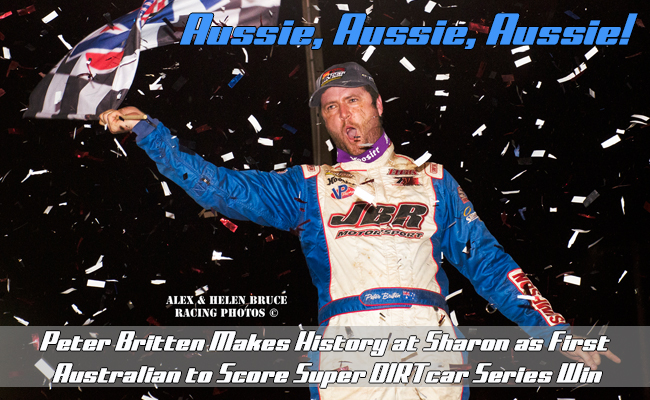 HARTFORD, OH – July 20, 2017 – Peter Britten created a little piece of Super DIRTcar Series history on Thursday night. Britten came from the 20th starting position and then used a slidejob in turns three and four to take the lead from Matt Sheppard following a lap 54 restart. The Brisbane, Queensland, Australia native led the final 46 laps and held off Stewart Friesen on a restart with 12 laps to go to earn the first Super DIRTcar Series win of his career in the Buckeye Ground Pounder 100 at Sharon Speedway. Britten also becomes the first Australian driver to win a Super DIRTcar Series Feature event.

“I can’t believe it. It’s amazing,” Britten said in Victory Lane. “We had a good car, rolling around and kept picking off cars one by one. I ran the middle and I’m like “man, my car’s pretty friggen good right now”. I just kept picking them off and I got to (Matt Sheppard) and I’m like “this will be the real test”. I was able to clear him and man, I don’t know if they were close to me. It’s unreal, a Super DIRTcar Series win at Sharon.”

The task seemed daunting at first for Britten, who rolled off from outside the 10th row while Brett Hearn started on the pole with his Larry Wight to his outside. Hearn capitalized on the track position to grab an early advantage, bringing third-starting Billy Whittaker along to second.

Ninth-starting Friesen made quick work and rolled inside the top-five by lap 10. One lap later, Hearn found his way into lapped traffic. By lap 14, Hearn had company in the form of Friesen, who had gotten by Whittaker, Wight and Tim Fuller to claim second.

Friesen caught Hearn for the lead 20 laps into the 100-lap affair as he found momentum in the outside lane while the No.20 remained on the bottom. Friesen setup the pass for the lead and was outside Hearn on lap 24 when the first caution of the race waved for a spun Frank Cozze on lap 24.

Under the yellow, Friesen suffered a flat tire that forced him to relinquish the second spot and head to the pits for a new sneaker.

“We got squeezed a little bit on the backstretch,” Friesen said of how the tire was cut down. “This Halmar team, they’re tough. They threw a tire on it and it was still pretty good.”

The ensuing restart gave Erick Rudolph a share of the front row and he used the outside lane position to power past Hearn and grab the point. Matt Sheppard took notice and followed Rudolph up high from fourth to second. By lap 36, Sheppard stole the top spot from Rudolph.

One lap later, the caution waved again at lap 37 for Hearn, who has a flat right-rear tire.  Sheppard held the lead on the restart, but fans were quickly dazzled by Britten who darted from fifth to pass Rudolph for second on lap 47.

When the halfway mark rolled around, Friesen had found his way back into the top-five, despite his earlier woes, while Sheppard still led Britten by over a second. That advantage, however, was eliminated on lap 54 by a caution when Keith Flach and Kevin Bolland collided. The incident landed Flach the Speedy First Aid Hard Luck award.

Sheppard chose the outside for the restart, but Britten powered around the bottom and drove low into turn three before sliding up in front of Sheppard in turn four to take the lead. From that point, Britten was able to built some momentum and click off laps with impressive speed through the slick middle of the track.

The restart on lap 75 was another strong one for Britten as Sheppard immediately settled into the second spot. Sheppard’s goal of a podium finish was wiped away shortly after when the right-rear tire on his no.9s went flat. That forced Sheppard to pit return to the rear of the field.

The final restart of the race with 12 laps to go put Britten alongside Friesen, who had passed Rudolph for second six laps earlier. Britten was flawless on the return to green and ran a perfect line in the final dash to the finish. Britten’s smooth and patient style allowed him to claim the win.

“The yellow came out and they were right on my butt again,” Britten said, lamenting the yellow flag. “It’s a little nerve wracking, but I just had to concentrate and keep hitting my marks. I knew I had a good racecar and I knew I was driving well, so at that point I felt like it was my race to lose. They were going to have to do something pretty incredible to try and get around me.”

Rudolph found another gear late in the race and was able to muscle under Friesen to take second away with three laps to go and grab the runner-up finish.

“It took maybe a few laps to find what the car wanted, but it liked being on the bottom,” Rudolph explained. “I ran most of the race there. Peter ran a great race. I don’t know if we had a shot at him if there was a late race caution. If we did it was a small chance. We had a really nice car and drove a really nice race. A top-three in this league of competition is nothing to be ashamed of.”

Friesen looked like the car to beat in the first half of the race after he soared to the front of the field before a flat tire derailed his effort. Regardless, he was happy with the run given the circumstances.

“It was good. We’ll take it,” Friesen said. “I had an awesome battle there at the end. Hats off to Peter and those guys. I’m happy for our team and to leave here with a top-three.”

Billy Decker, who failed to transfer to the race from his heat, but won the Last Chance Qualifier, finished in fourth. He was one spot ahead of 11th starting Pat Ward.

The victory for Britten was particularly special given how he earned it. Britten’s drive from 20th to victory also made him the KSE Hard Charger.

“These races are damn near impossible to win from the front row, so to come from 20th and do it, words can’t even describe it,” Britten said. “That just shows how good our racecar is. I was in the groove tonight and did my job as a driver.”

“I passed Matt running a different line than what he was running and got by him,” he added about the winning pass. “To be able to drive by basically every good car that there is in Northeast Dirt Modified racing for the first win is pretty incredible.”

Britten’s win is also a victory for the so-called ‘Little Guy’. The driver of the No.21a owns his own equipment and team this year. He has teamed up with Rich Scagliotta to get his single-car, single engine team to the track for each race.

“It’s pretty satisfying getting the first win as a very small operation,” Britten concluded. “Rich (Scagliotta) gets my car to the racetrack. We don’t have a major sponsor. We have one car, one motor. We’re going to keep doing our best to make all the races and getting a win here is a motivating factor to get back and keep working.”