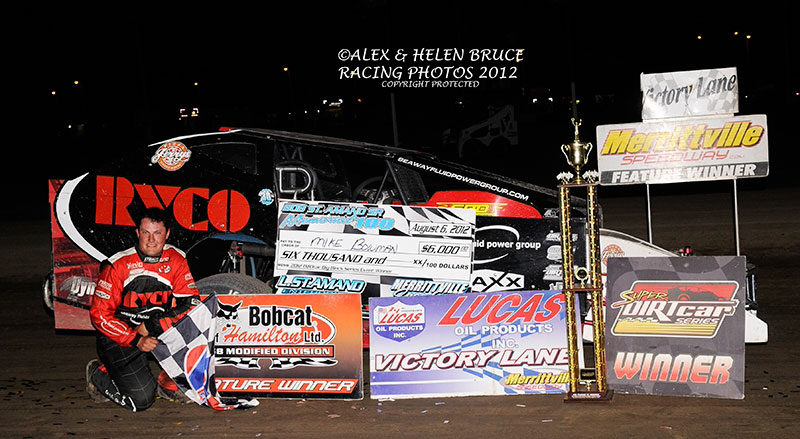 Small Block Fends off Matt Sheppard in Series Round 6

THOROLD, ONTARIO – August 7, 2012 – Mike Bowman’s first-ever Super DIRTcar Series victory was more than just a win – it was a sweep as the no. 71 Hydraulics/Seaway Fluid Power Group Ltd. driver led the 34-car field in almost aspect, from qualifiers through to the checkered flag.

The local 358-Modifed driver barely expected to qualify against the mighty Big-Block Modifieds, let alone lead them in every single lap of the Monday’s 100-lap feature at Merrittville Speedway.

“When these guys come to town, you pretty much hope to get in the feature let alone win it,” Bowman said.

It turned out that Bowman had little difficulty getting in the feature, earning the top time in his heat group with a 15.578-second lap – a time bested overall only by Jimmy Phelps with 15.246 seconds – and leveraged his starting position to place first in the qualifier. Bowman drew the pole for the feature, and at the green flag powered ahead of Pete Britten in the second spot.

Bowman outlasted six cautions, three double-file restarts and three single-file restarts, speeding ahead of the pack on the 3/8-mile D-shaped oval with such skill that spectators soon forgot that a Small Block powered the 71. He resisted challenges from Big-Block Modified drivers Britten and Matt Sheppard to maintain the lead through the checkered flag, dashing Sheppard’s hopes of a fourth consecutive Super DIRTcar Series victory at Merrittville.

“We’re really glad we could come out and get one for the local boys,” said Bowman, a Merrittville regular. The track runs 358-Modifieds, but not Big-Block Modifieds, on a weekly basis.

“I’m surprised, as fast as the track was, that a Small Block could get it done,” Bowman said. “But tonight it seemed like we were pretty much on par with the Big Blocks.”

Other Small Block successes came for 22-year old “Mighty Mat” Williamson, who started 11th on the grid but worked his way to third, and “Mr. Small Block” himself, Pete Bicknell, who finished sixth.

Although unable to beat Bowman, “Super Matt” Sheppard had an impressive run, climbing from ninth to second place in his JB Motorsports no. 9s FX Caprara Car Co./Xtreme Lubricants/Bicknell entry. By lap 14, Sheppard had worked his way to sixth place and was battling “the Doctor” Danny Johnson for a spot in the top 5. Johnson raced ahead to third in lap 24, leaving in his wake Justin Haers, whom Sheppard passed in lap 30. Johnson faltering in lap 31, Sheppard soon claimed third and set his sights on Britten in second. Sheppard got his chance in lap 66 as Britten fell behind to ninth place, eventually finishing 21st after bringing out a caution in lap 87.

“All and all, we were pretty equal, he was a little better than we were and they did a great job tonight,” Sheppard said, congratulating first-time series winner Bowman. “It was a good night for us, he was just faster than we were tonight. He did everything right. His car was fast, he started up front – it was his night”

Rounding out the top five were Williamson in third, Jimmy Phelps in fourth, and Billy Dunn in fifth.