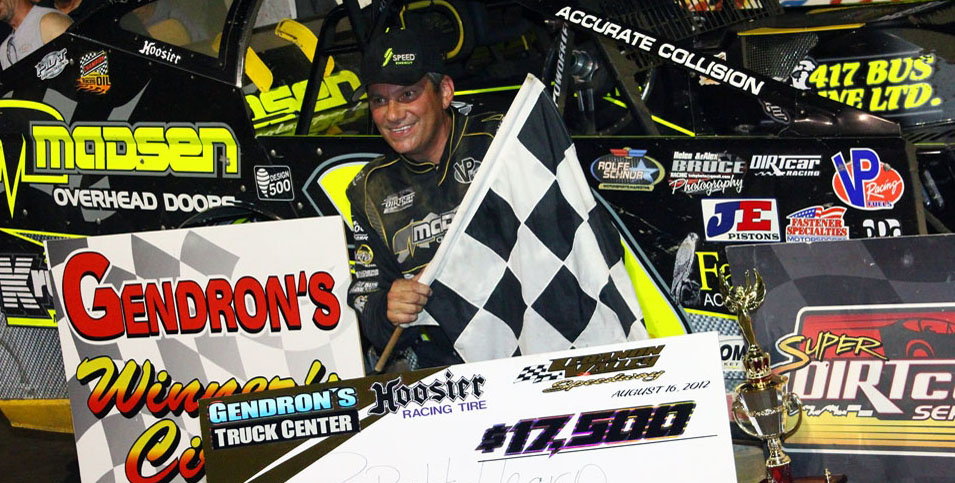 WEST LEBANON, N. Y. – August 17, 2012 – Brett’s back. And Brett “the Jet” Hearn’s return to the Super DIRTcar Bit-Block Modified Series did not disappoint.

Sudden illness kept Hearn from competing in last week’s series events at Merrittville and I96 Speedways, but he made up for his absences with a stunning victory at Lebanon Valley Speedway’s $17,500-to-win “Mr. DIRT Track USA” Thursday, Aug. 16.

After starting 23rd, even Hearn, seven-time Super DIRTcar Series champion and regular racer of Lebanon Valley’s high-banked half-mile, was surprised to find himself leading the field through the checkered flag.

Hearn had made the fast time with a 19.673-second lap, nearly setting a new track record. However, a broken set of gears forced him to the pits early in his qualifier, causing him to finish tenth in the heat. His team prepped the backup car and Hearn powered it to second place in a last-chance qualifier, putting him 23rd in the starting grid.

“We jumped on there with the fast time, a super fast car, then we break the car in the heat race, go to a backup car, and we didn’t know what to expect,” said Hearn, who celebrated his ninth “Mr. DIRT Track USA” win with Thursday’s victory. “If I had my best car, and I knew it was my best car, to come from 23rd here in a race is really really hard. But to come from 23rd in a backup car against this field, it’s – I gotta really think about this a little bit. I’m shocked.”

Despite his difficult starting position, Hearn spent the caution-ridden early laps of the race steadily gaining ground, finally breaking the top five off a double-file restart in lap 39. He steered his No. 20 around Billy Decker’s 91 for third in lap 58 and closed in on Andy Buchetti in second. When leaders reached traffic in 71, Hearn was able to maneuver around lapped cars just slightly better than Buchetti, taking the second spot in lap 72.

Hearn continued darting through lapped traffic in pursuit of Jimmy Phelps, who had led the race from the initial green flag. In lap 83, Hearn got his chance, passing Phelps on the outside of turns one and two and never looking back.

For his surprising victory, Hearn thanked the No. 20 crew members, who took a backup car prepped for shorter tracks and worked quickly to get it ready for the difficult half-mile before the feature.

“I’m really proud of my team for making the switch over because that car was really set up for some of the smaller tracks that we go to, it wasn’t set up for here. So they had to thrash and change a bunch of stuff to get it even close. They got the job done.,” Hearn said. “They had to work quick. They had to steal parts off the other car, steal parts out of the trailer, get everything changed over, and I am just amazed at how good the car was.”

Early race leader Jimmy Phelps just couldn’t catch up to Lebanon Valley Speedway track points leader Hearn in the last 15 laps of the 100-lap eighth round of the series, but he was able to walk away with a second-place finish – not too shabby, considering Phelps entered the race just 81 points shy of Super DIRTcar Series point leader Matt Sheppard.

“All in all we’re happy. We would have liked to have held on there the last 15 laps, but that’s racing,” said Phelps, a native of Baldwinsville, N. Y. “We led a long way, just obviously Brett was really good. For him to come that far, he obviously had a really good car.”

Phelps, who earned the second-best time trial with a 19.866-second lap and qualified well, drew the top spot in the lineup and maintained it through 80 laps and four double-file restarts. He almost kept it through the final 20 laps, until Hearn utilized Lebanon Valley’s unique high-banking to overcome him in lap 83.

“You need a whole different approach to this place. I’m really fortunate that HBR has got a pretty good handle on it, runs pretty good equipment for here,” Phelps said of the track at Lebanon Valley. “I think we could have been a little bit tighter at the end, but then again it could have hurt us at the beginning. It’s one of those deals where it would take a whole lot of trial and error, and we don’t run here enough to do that.”

The Super DIRTcar Series heads back to Rolling Wheels Raceway Park in Elbridge, N. Y., for the 100-lap, 150-point round nine Sunday, Sept. 2. For the latest news and updates about the Super DIRTcar Big-Block Modified Series, “like” DIRTcar Racing on Facebook or follow the @SuperDIRTcar Twitter feed.