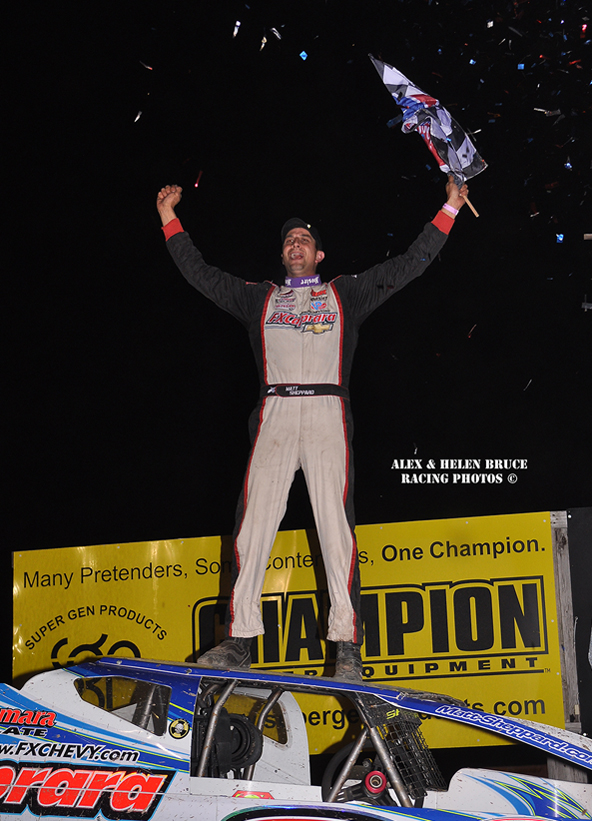 Wight had retaken the lead from Sheppard with 11 laps to go and opened up a three car-length lead that shrank in a hurry when the pair broke out of lapped traffic momentarily with two laps to go.

Wight met a final backmarker exiting turn three on the final lap and hesitated for a split second enabling Sheppard to pull off his winning bid through the final turn. Sheppard’s margin of victory – four feet.

“I was running up top to get around the traffic, but I was getting free up there,” Sheppard said. “When I got some open race track at the end, I got to the bottom. I saw the white flag and I thought – if I do this right, I think I can get there.”

“I thought I had time to get around that last car, but then I saw Matt there,” Wight shrugged, “One little slip-up cost me, but we’ll keep working at it.”

Jimmy Phelps finished third, close behind the leaders. “Right as I got to them, I had a left front going down,” Phelps said.

Billy Decker, who contested the lead for many a lap over the first 50 circuits, finished fourth. Stewart Friesen was fifth after outdueling Peter Britten and Billy Dunn. Steve Paine, Rob Bellinger and Justin Haers completed the top ten.

Polesitter Danny Johnson led for 24 laps before giving way to Wight. He was closely stalked by Decker and Sheppard (from 9th on the grid) before bringing out the first of two cautions with a flat tire on lap 32.

At the halfway mark, Wight had a two car-length advantage over Sheppard with Decker third and Britten fourth.

Sheppard gained the point with a strong inside move on the final restart on lap 45.

The Super DIRTcar Series moves to Albany-Saratoga Tuesday, July 7 for Brett Hearn’s “Big Show 7”, which pays $10,000-to-win and will include Kenny Wallace and many competitive local teams. Thirty-seven Big-Blocks competed at Canandaigua.