Sheppard in His Own League at Merrittville Speedway 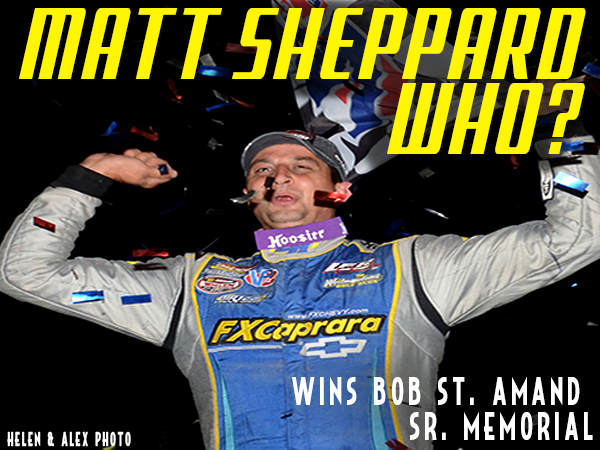 Sheppard in His Own League at Merrittville Speedway

“It mean’s so much what they do here. When you walk out of here you know you’re going to have a pretty good night. They worked really hard with the lap sponsors and it doesn’t go unappreciated,” Sheppard said about the effort put into the nights Bob St. Amand Sr. Memorial.

Tim Fuller and Pat Ward took the 31-car field to the initial green.

An early battle began between Fuller and Sheppard for the top spot as they ran side-by-side for several laps.

Fuller. Sheppard was able to takeover the top spot from Fuller on lap 18.

Seventh place starter, Brett Hearn was running high on the cushion and moved into third on lap 38.

Wight took advantaged of the lap 48 restart and dove to the outside of Hearn as he took over third spot.

Sheppard continued to show the way at the halfway mark over Fuller, Wight, Hearn and Chad Brachmann.

21st starter Pete Bicknell was a man on the move as he slipped into eighth position on lap 52.

Sheppard once again caught the back of the field on lap 58 as he began to battle his way through tight lapped traffic.

Chad Brachmann then took third from Wight on lap 59 and drove away to chase down Fuller.

Fuller tried to hold off Brachmann as Brachmann tiptoed around the bottom for several laps and was able to close in and take over second spot from Fuller on lap 75.

Fuller didn’t give up too easily as they battled back-and-forth for that second spot.

The seventh restart on lap 79 saw Friesen charge into third place as he worked the outside groove to chase down Brachmann.

Sheppard carried the momentum and the bite around the outside of the track as Brachmann hugged down low hoping to make ground on Sheppard.

28th starter Mike Bowman made a late race charge as he snuck into fourth position by lap 81.

The final caution of the night was brought out on lap 94 causing Sheppard to form back in line, erasing his straightaway lead.

Sheppard once again brought the field back to the green with just six laps remaining.

Sheppard tucked down to the bottom to hold his position and slowly pulled away form second place runner, Brachmann.

As Sheppard pulled away from the field Bowman and Friesen battled back and forth for the third spot but it was Bowman who crossed the line to take third over Friesen.

“The thing wouldn’t turn. This thing was tight. We didn’t free up enough and I kind of just found a groove where I could drive straight up all the way across the track and finally the thing would hook and turn left and away she’d go,” Sheppard said in victory lane.

“Stew’s been red hot too but it seems like the only way we can gain points on him is to win races and thank god we’ve been doing that and hopefully we can keep that going here,” Sheppard said about the tight points battle between him and Friesen.

Chad Brachmann, one of Merrittville’s local favorites was pleased with his podium finish against the Super DIRTcar Series boys.

“Matt was in a league of his own like every other race he’s at,” Brachmann said. “We were decent. I think I could have been a little bit better forward drive wise. To hang on up front and to finish second to Matt, that’s a good accomplishment we did tonight.”

28th starter Mike Bowman was in complete shock as he stood on the front straightaway celebrating his advancement all the way up to third position.

“The car was really good. I bent the steering wheel in the wreck early on. I’m really surprised to be standing up here. The guys put a heck of a lot of effort into tonight. We really needed this,” Bowman said.

Race Notes: 37 modifieds attempted to qualify and 32 started the field. Tim Fuller set fastest time overall in time trials with a 15.763. Eight cautions were brought out during the 100-lap main event. Three of the top five finishers in the feature were Small-Block Modifieds.

The Super DIRTcar Series returns to action in Ransomville, N.Y. on Tuesday, Aug. 2 at Ransomville Speedway.