“The Jet” Flying High – Leads points with one to go 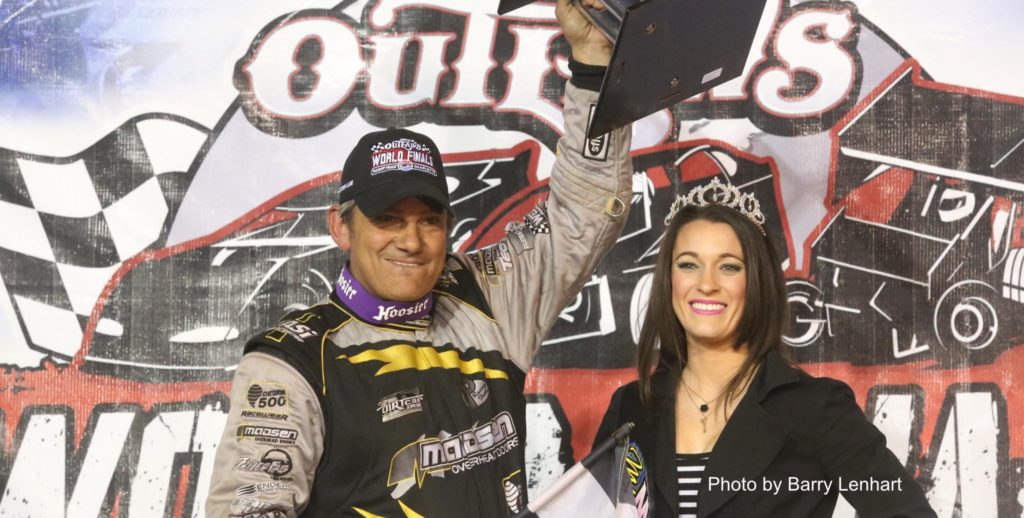 Godown and Sheppard raced side-by-side for several laps, Sheppard a nose ahead on the turns and Godown fast on the straightaways, before Sheppard was finally able to slip by in turn 5. Another powerful double-file restart in lap 9 launched Sheppard to second place.

The series point leader and runner-up took center stage as they circled the 4/10-mile, both looking for more than just the night’s victory. Hearn lapped Rich Scagliotta in lap 16, Sheppard in hot pursuit as the leaders maneuvered through traffic.

A left-rear flat on Keith Flach’s No. 43 brought the third caution of the race and put Sheppard and Hearn on the front row to battle it out at the restart.

Once again, Sheppard found some extra speed on the restart, and tried to slide inside Hearn for the lead. However, a lap-20 caution slowed Sheppard’s advance.

The double-file restarts played to Sheppard’s advantage, and he again sped to the inside groove to attempt the pass.

“I never saw anyone alongside me, but I knew I was under pressure,” said Hearn, who managed to fend off Sheppard’s advances and soon carve out a hefty lead. “I just kept my head down and kept on going as fast as I could go.”

Late in the race, the No. 1 of Stewart Friesen picked up momentum, and Friesen passed Sheppard for second in lap 32. Friesen quickly closed in on Hearn, with Sheppard in hot pursuit. The three darted around lapped traffic, Friesen and Hearn going three-wide around Johnson and Sheppard close at their heals.

However, the late-race challenges had nothing on Hearn, and he picked up another World of Outlaws World Finals victory.

While pleased with his success, particularly the boost his victory gave to his point advantage over Sheppard, Hearn was quick to refocus on improving the car for Saturday’s racing.

“We were definitely a 40-lap car, maybe even a 50-lap car, so we came on strong there in the end. We learned some things, we’ll apply that for tomorrow,” Friesen said. “I’m really proud of my team, these guys work really hard.”

Sheppard finished third to collect his seventh top-five finish at The Dirt Track at Charlotte.

“We had a good night tonight. We started a little further back than Brett and Stew, and we got up there,” said Sheppard, who, despite his many other accomplishments, has yet to claim victory at Charlotte. “We start a little further back tomorrow, so we’ve got a little more work to do, but if we were good tonight, I don’t see any reason why we shouldn’t be good tomorrow.”

Dale Planck, also a two-time heat race winner this year at the World of Outlaws World Finals, started the race in fifth and finished fourth. Gary Tomkins finished fifth after starting second. Hard-charging Jimmy Phelps and Billy Dunn started 17th and 23rd, respectively, and ended up sixth and seventh. Rounding out the top ten are Ryan Godown in eighth, Billy Decker in ninth and Matt Billings in tenth.

The Dirt Track at Charlotte