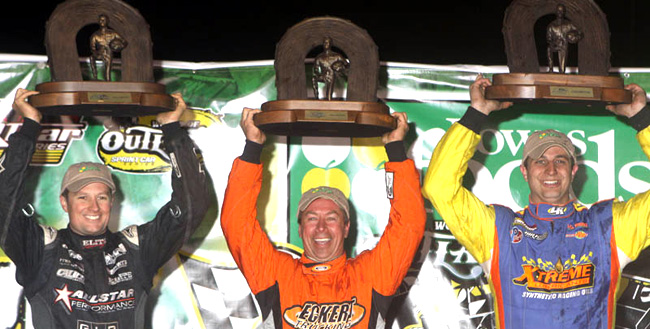 Having driven Vinnie Salerno’s No. 4 Teo to victory in the 2010 season finale, McCreadie of Watertown, N.Y., drove the Teo back to victory lane on Friday and ran down Sheppard in lapped traffic on Saturday to win his second 40-lap feature in as many nights, earning $6,000 for his effort.

“Two in a row. Unbelievable,” said McCreadie. “This place in a modified suits my style very well.”

Sheppard of Waterloo, N.Y., entered the weekend 53 points behind Billy Decker in the race for the championship, but after Decker had engine trouble on Friday and Sheppard set the fast time for both events and finished second on Friday, he held a 10-point lead heading into Saturday’s season finale.

Decker of Unadilla, N.Y., and Sheppard each won a heat race and shared the front row for the final race of the campaign. Sheppard’s JB Motorsports No. 9s shadowed Decker’s No. 91 LJL Racing machine for the first 10 laps of the race. However, Sheppard moved to the front on lap 10.

McCreadie, who started third, got better as the race went on and eventually passed Decker (lap 18) and ran down Sheppard. McCreadie made his first bid for the lead on lap 28 and tried lap after lap as the three leaders snaked their way through lapped traffic.

When Sheppard became bogged down in traffic on lap 37, McCreadie gained momentum and carried it into the lead entering turn three on lap 38. He led the final three circuits and beat Sheppard to the checkered flag by .785 seconds to complete the weekend sweep.

“It is so hard to go out and run with those guys,” McCreadie said. “They are hard to beat. They are amazing. I kept catching Matt (Sheppard) and our car just kept getting better and better and better and I think Matt was right when he said his car was fading a little bit. When that happened, we got fortunate in traffic. Sometimes it is better to be in second when you are in traffic and it worked out for us tonight. We will take it.”

Sheppard beat Decker to the finish to claim the runner-up spot for the second consecutive night and earn his second straight Super DIRTcar Series championship by 15 points over Decker, who had led the standings the majority of the season.

“I think this is better than last year,” Sheppard said looking up at the sold-out crowd of more than 14,000. “Last year will always be special because it was the first one. This year, Syracuse turned it around. It was looking pretty bleak.

“We didn’t think there was any chance we were going to be able to get back to the front, but we were able to do it. The team was really good. They worked hard and they gave me a great race car to drive down here this weekend and it was super fast all weekend.”

Sheppard knew he had no room for error with Decker close behind.

“I gave it everything I had,” Sheppard explained. “I could feel my car was dying and I knew that if I didn’t drive the wheels off of it there was a good chance that Billy (Decker) and maybe somebody else would get by me and then I wouldn’t win the championship. I probably ran harder than I normally would have. I could feel it dying a little bit and I drove it as hard as I could. That’s all I had.”

While Decker basked in championship glory at the four-tenths-mile dirt track, Decker finished the season with the bitter taste of defeat lingering in his mouth.

“I’m very disappointed,” said Decker, who previously won the Super DIRTcar Series championship in 1998 and 2008. “We had a bad night last night and it cost us. We got back on our game tonight. We had two races where we finished out of the top five and one of them was last night. We had a great series.”

Jimmy Phelps of Baldwinsville, N.Y., and Tim Fuller of Edwards, N.Y., rounded out the top five in the race, which was completed without a yellow flag.

Sheppard won four races and racked up 11 top-five and 14 top-10 finishes in 15 starts, while Decker won twice and managed 13 top-five and top-10 efforts.

Sheppard will be honored at the Super DIRTcar Series banquet Nov. 19 at the Turning Stone Casino and Resort in Verona, N.Y.