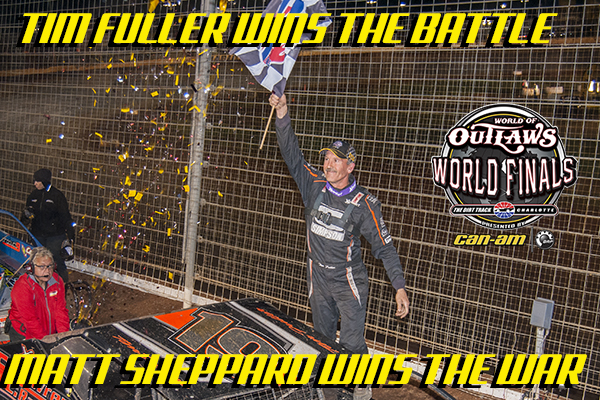 CONCORD, NC – November 3, 2018 – Tim Fuller of Watertown, NY won the battle and Matt Sheppard won the war. With just a handful of laps the 2018 Mohawk International Speedway Champion tracked Sheppard down and made the pass for the World of Outlaws World Finals Presented by Cam-Am 40-lap Feature win. Matt Sheppard crossed the finish line second as the newly crowned 2018 Super DIRTcar Series Champion. The Franklinville Flyer Billy Decker was a threat at the front of the field, but had to settle for third. That rounds out the final chapter in the 2018 Super DIRTcar Series season.

Tim Fuller’s 2018 season started out with a run of bad luck, but he finished with three Super DIRTcar Series wins including “The Jack” at Fonda Speedway, a Series win at his home track Mohawk International Speedway, and now the World Finals. “This one was pretty sweet. Matt [Sheppard] is on top of his game and he’s been showing that for the last four or five years. This is great to go into the Winter with. We’re pretty fortunate to have owners like Mike and Barb Maresca of St. Lawrence Radiology.”

Matt Sheppard has added yet another layer to his legacy as arguably the greatest Big-Block Modified driver in the history of the sport. He is now second in all-time Super DIRTcar Series Championships, just one shy Brett Hearn’s whopping eight Series Championships. “Brett [Hearn] is the best that’s ever sat in Big-Block Modified and being as close as we are to the Championship record, it’s definitely in the back of my mind.”
This year the MSM team ran into some bad luck with flat tires, in particular while leading races. “Last season, everything went right for us. We couldn’t do anything wrong. It was really a dream season. This year was one of those years that we still had the speed but didn’t have the luck we had in the past year. Hopefully we got it out of our system, and we were still able to pull the Championship out. We’ll be working hard and getting ready for next season,” said Sheppard.

Sheppard started on the pole and choose the outside lane to begin his 40-lap quest for the Series Championship. The no. 9s jumped out to the front and kept the Matt Sheppard Motorsports machine right around the outside to build his lead. Sheppard worked his way through lapped traffic but had difficult time getting around Yan Bussiere and Pat Ward. That’s when Tim Fuller closed in.

Late in the race Tim Fuller got to Matt Sheppard’s rear bumper and went wheel-to-wheel with the no. 9s. Fuller then swept by Sheppard around the outside to make the final race-winning pass of 2018. After a stellar year Erick Rudolph came up short at the World Finals and posted a twentieth-place finish to end the season.

Billy Decker ended his 2018 season with the final spot on the World Finals podium. Decker was also set up for the outside and looked like a threat for the lead, but was held up in the lapped traffic Fuller and Sheppard left in their wake. “We were pretty good right out of the box. We missed it a little bit this afternoon but Mike and the guys made some adjustments. We were pretty doggone close in this last race here tonight. I was just a little bit too free to dice it out for the win, but had a lot of fun nonetheless.”