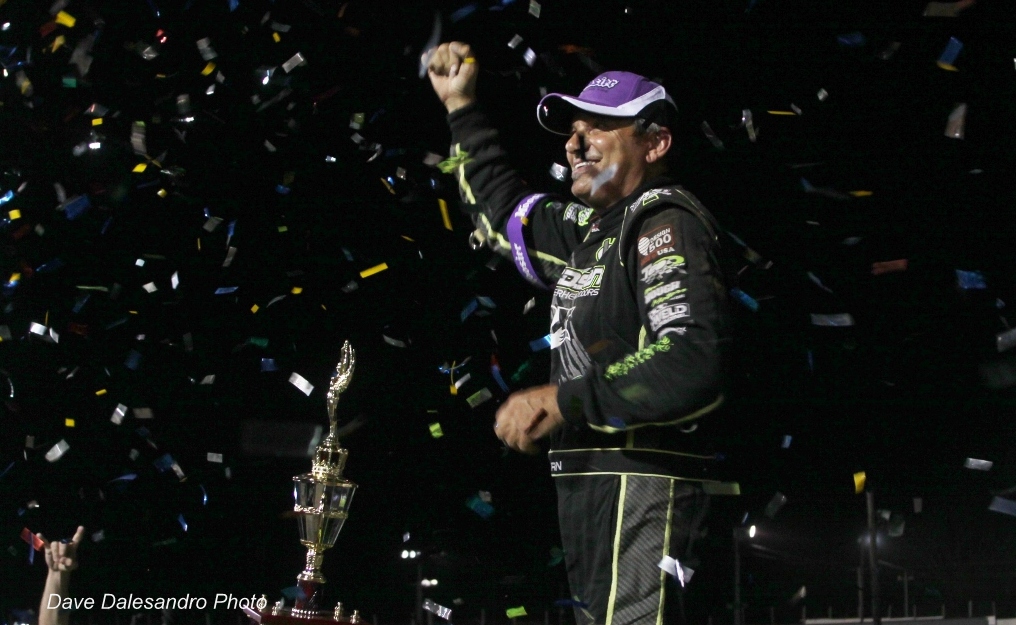 WEST LEBANON, N.Y. – August 14, 2014 – Better late than never. One of the winningest drivers to ever sit behind the wheel of a Big Block Modified had gone through more than half the race season without a Super DIRTcar Series victory, until Thursday.

“I just did what I do on Saturday nights,” said the Sussex, N.J., driver, whose winless series transcript was still impressive, with four top-five finishes and eight top-tens out of ten starts. “I have a couple spots on the track where I like to make passes and I was able to do that. When time came to step it up at the end there to get the last two spots, I was able to do that.”

Hearn’s Madsen Overhead Doors No. 20 was fast right out of the gate, both setting fast time and setting a new track record with a 19.335-second lap.”The Jet” later flew to victory in his heat race, but started the race tenth after a disappointing redraw.

However, a less-than-stellar starting position wasn’t about to keep the eight-time Super DIRTcar Series Champion out of the limelight at his home track. After a lap-seven caution slowed the pace early in the race, Hearn leveraged the ensuing double-file restart to gain several positions, and by lap 13 he was running in fourth. Defending ‘Mr. DIRT Track U.S.A.’ Andy Bachetti, of Great Barrington, Mass., started the race on the outside front row and held onto the lead after the first caution of the race.

Within just a couple laps, Hearn was challenging Donnie Corellis, of Averill Park, N.Y. for third, and claimed the position in lap 15. His battle with Kolby Schroeder, of Poughkeepsie, N.Y., proved a greater challenge as the leaders soon reached traffic at the back of the field. Bachetti slowed as he lapped cars, allowing Schroeder and Hearn to gain ground. In lap 27, the three were within a few car lengths of each other, and the next lap Hearn rounded Schroeder for second. Hearn and Bachetti raced wheel-to-wheel until Hearn powered forward on the inside groove to claim the lead.

In lap 29, Matt Sheppard, of Waterloo, N.Y., came to a stop in turn 2 to bring the race’s second caution. Sheppard, who came to Lebanon Valley with the series point lead, pulled into the pits for a tire change and returned to the track under yellow. However, with more extensive mechanical issues, Sheppard exited the track again in lap 35.

Hearn was fast on restarts, and had no trouble staying ahead of the field in lap 34 when the green flag waved, nor in lap 52 after a lap-48 caution.

The yellow flag waved for the fourth caution of the race in lap 69 for Billy Decker, of Sidney, N.Y. Decker, who was second in series point standings to Sheppard by a margin of five points, had stopped on the track and the Gypsum Wholesalers No. 91 was towed to the pit area. When field returned to green, Sheppard pulled the FX Caprara Car Co. No. 9H back onto the half-mile in an attempt to keep his point advantage over rival Decker.

Schroeder brought the last caution of the race in lap 79 with a flat right rear tire and Hearn kept his lead off the restart. Hearn powered forward, all the way to the ‘Mr. DIRT Track U.S.A.’ Victory Lane to claim his $17,500 check.

“We had some goals coming here tonight,” said Hearn, whose victory has brought him closer to leaders Sheppard and Decker in series point standings. “We would have liked to have drawn a little bit better, but as it turned out, it was our race to win.”

“The car was a little tight tonight, we just missed a little bit,” said Corellis, who started third, fell to fifth mid-race, and made his way back up by lap 78. “If we had been a little freer we could have had second, but I don’t think we had anything for Brett Hearn. It was a good show.”

Stewart Friesen, of Niagara-on-the-Lake, Ontario, finished fourth after a tense late-race battle with Danny Johnson, of Rochester, N.Y., who finished sixth. Rob Pitcher, of Chatham, N.Y., finished fifth. Rounding out the top ten are Larry Wight, of Altmar, N.Y., in seventh, Kyle Sheldon, of Nassau, N.Y., in eighth, Eddie Marshall, of Ridgefield, Conn., in ninth, and Keith Flach, of Ravena, N.Y., in tenth.

Sheppard’s return to the racetrack put him at 23rd, two positions behind Decker in 21st. Sheppard keeps his point lead, but by a slim margin of three points. Hearn remains third in points, but now within 40 points of the lead.