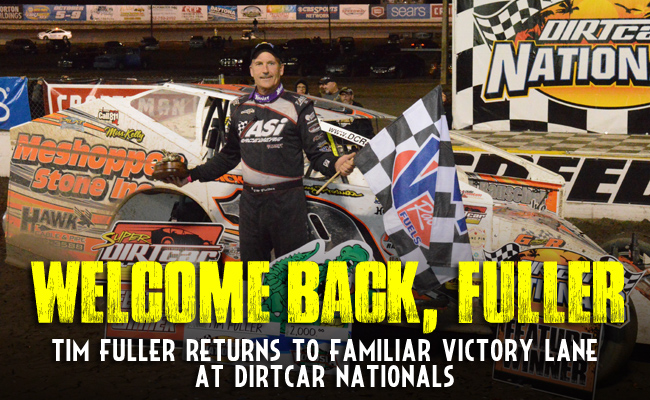 “It’s been a lot of years since I’ve been here,” Fuller said in victory lane. “First and foremost I have to thank my car owners (Rauschers). To be able to come down here and to be able to do this for four days in the dead of winter is unbelievable. I dragged a crew man down from Scranton, Pa., Brett Tonkin, because I had no one coming down with me and this is all for them.”

Tyler Siri and Dippel shared the front row of the start of the 2016 Big-Block Modified season with Dippel charging by Siri for the lead at the exit of turn two on the bottom of the opening circuit. Siri looked for a way back by the Wallkill, N.Y., teenager but as he looked for an advantage Fuller found the fast line and drove into the runner-up spot.

Once he got to second, Fuller moved up to the top groove with his Enders powered Bicknell while Dippel continued to try and make laps on the bottom. This allowed Fuller to work his way by Dippel for the lead on lap six. Before another lap could be completed, Siri brought out the first caution of the night as he slowed with a flat tire.

“I went to the top and started winging it,” Fuller said about his move for the lead. “If you can get to that top and your car is good enough that you don’t push it is the predominant groove here.”

Fuller elected to use the outside of the front row for the restart and he blasted into the cushion to hold off Dippel. Dippel meanwhile had his hands full with Dunn. Dunn drove by Dippel on the top, securing the second spot as they came off of turn four.

As Fuller paced the field, the action behind him and Dunn picked up with Dippel, Billy Pauch and Larry Wight all battling for the third position. Pauch was able to fend them off each time to hold onto third.

By the time the race reached the midway point, Fuller had extended his lead over Dunn and began to work slower traffic. He stayed on the upper portion of the speedway with Dunn in tow. Pauch remained third with Dippel and Wight getting together. This caused Dippel to catch the wall off of turn two. Dippel stopped with a damaged race car necessitating a second caution.

Dunn gave Fuller all he could handle on the restart as he looked down low and slid up the speedway to pull alongside of Fuller as they exited the second turn. They remained that way all the way down the backstretch before Fuller barley cleared him on the top of turn three with Dunn trying to keep pace off of four.

“Billy Dunn got up inside me and it really scared me,” Fuller said. “I started to turn it up a little bit. If you watched Race-Monitor I probably picked it up two or three tenths because I started trying a little bit harder. I was just out there in cruise mode and when he blasted up there inside of me on that restart I picked it up and was determined not to lose it.”

Fuller pulled away from that point. He blasted the cushion harder and harder each lap increasing his lead over the Dunn. That lead was negated one final time on lap 23 as Eldon Payne’s car blew a right rear tire which caused him to slow in turn three.

Dunn and everyone else had one more shot at Fuller on the restart. Fuller made sure that he wasn’t going to be denied as he drove into one and caught the cushion perfectly running away from the rest of the competition. Dunn remained in second by himself while Pauch and Wight renewed their battle for the final spot on the podium.

Fuller took the checkered flag nearly three seconds in front of Dunn. For Dunn, of Watertown, N.Y., it was a good night considering he had never turned a lap at the track prior to Tuesday night’s practice session.

“This is a new track and a new car,” Dunn said about his Bicknell. “Bob Slack and I tried some strange stuff on the car and it’s got a lot of promise but it needs a lot of work. It just got too tight there the last 10 laps. The harder I drove it the worse I was.”

Dunn had one chance where he could have thrown the slide job on Fuller and it may have been possible for him to take the lead and keep it. He did not pull it off forcing him to settle in for second.

“I got a good run on the bottom on the one restart and if I could have slid up in front him I probably could have held him off, but the best car won tonight,” he said. “We are close we just need to do a little bit of work.”

Pauch, of Frenchtown, N.J., finished in the third positon after starting the main from the outside of the second row. Pauch tried to get in the mix early for the lead but settled in to the third position as the race became a battle for the preferred line on the cushion. It was his ninth career third place finish at Volusia.

“It’s nice to make the podium and come up here,” Pauch said. “I have to congratulate Tim Fuller. He deserves a win down here. He runs hard. I was trying to beat him to the front there and I thought I had him before he got me back. It was wild there when we were running three-wide.”

Heat race wins went to Siri, Dippel, Fuller and Pauch with Jamie Mills and Danny Johnson each earning a pair of victories in the consolation events.