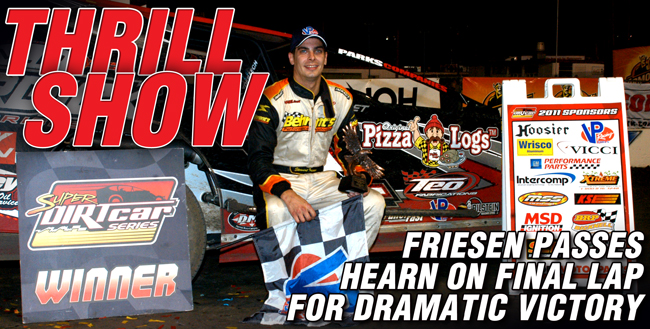 BARBERVILLE, Fla. – Feb. 16, 2011 – Stewart Friesen hasn’t missed a beat over the winter. On Wednesday night’s Super DIRTcar Series Big-Block Modified opener, he caught and then slid ahead of Brett Hearn on the final lap at the 40th DIRTcar Nationals by University of Northwestern Ohio to win for the second year in a row at Volusia Speedway Park.

Friesen, the 2010 Super DIRT Week Big-Block Modified champion who at 27 was one of the hottest drivers in the Northeast last season, battled Matt Sheppard for second throughout the 30-lap feature. The two swapped the runner-up spot on six double-file restarts before Friesen made the final one work for a chance to run down Hearn, a seven-time Super DIRTcar Series champion.

With 10 to go, Friesen was sitting third. A caution for two cars getting together in Turn 1 gave him a chance to get Sheppard, the defending Super DIRTcar Series champion. Friesen lined up behind Hearn with Sheppard on the outside. Hearn shot out, Friesen’s Enders-powered Teo stuck to the bottom and he swept into second-place while Sheppard was trying to keep his momentum on the top.

Friesen set his sights on Hearn, leaving Sheppard to battle for third with Danny Johnson, who moved up from the seventh starting position. Friesen kept driving into the corners hard, trying to gain enough momentum to slide up in front of Hearn, but Hearn stood his ground.

A final caution when Darwin Greene spun in Turn 3 with eight to go looked like another opportunity for Hearn to protect his advantage. Friesen tried but couldn’t gain any ground on the ensuing restart. Hearn was driving smart, giving no room for anybody who might be behind him to make a move. Then with two laps to go, Hearn slid up the track just enough in Turn 4. Friesen pounced. He slid to Hearn’s inside and the two raced wheel-to-wheel, with Hearn still having the advantage.

Next time around the white flag was poised to wave when Friesen again powered his car to Hearn’s left in Turn 4. This time it stuck. Friesen charged down the front stretch at the half-mile oval and into Turn 1. He kept Hearn on the outside and drove into the lead down the backstretch. Hearn tried to slide back under him to no avail. Friesen surged through the final two corners to the checkered flag to win the opening night of Big-Block Modified racing at the DIRTcar Nationals by UNOH for the second consecutive year.

“It was pretty surreal,” said Friesen, of Niagara-on-the-Lake, Ontario. “It was one of those things where you’re racing with the two best guys on dirt, Matt Sheppard and Brett Hearn. Me and Matt kept switching back and forth for second and third on the restarts. Brett was being pretty tricky and using a lot of racetrack and he had a bunch of tricks up his sleeve on the restarts. It was always different, he would always restart in a different spot and kept us on our toes. That last one we were able to get back by Matt and get to second. On a five-lap run we could just kind of reel in Brett and get to his bumper. We were able to get a good run on him, he pushed a little bit, I put a slide job on him and it stuck.”

Hearn was confident in the closing laps that he would be able to hold his ground at the front of the 26-car field. He led the first 29 laps, but Friesen led the final and most important one.

“He surprised me,” said Hearn, of Sussex, N.J. “I knew I didn’t have a big lead and I was running on the cushion as hard as I thought I could. I was doing everything I could. I didn’t really think the track would allow him to make that move, but he was able to cut the corner off and get up in front of me and get to the cushion. As soon as I saw him coming across, I knew I had to lift to try to cross back down on him. There just wasn’t enough grip to get off the bottom of Turn 2 with my car. He got me.”

And he got the final four nights of racing off to an uproarious start. On Thursday, Friday and Saturday, the grandstands open at 5 p.m. with hot laps at 6 p.m. and racing at 7:30 p.m. For more information on DIRTcar Racing, visit http://www.DIRTcar.com. For more on the DIRTcar Nationals by UNOH, go to http://www.DIRTcarNationals.com or follow the event on Twitter @DIRTcarNats. For tickets, call 386-985-4402.