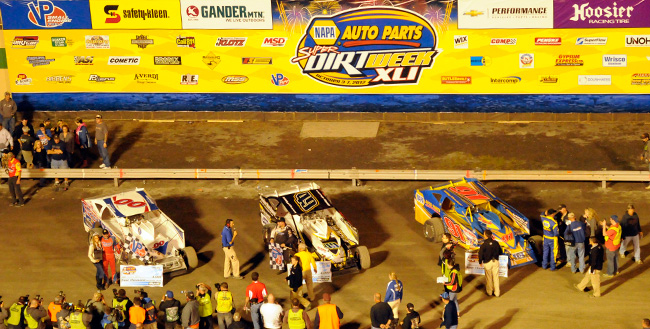 Decker, 47, once again put his stamp on the big-block preliminaries, rolling to a wire-to-wire triumph in the first 20-lapper. He was never seriously challenged en route to his 11th career heat win during the fall racing extravaganza.

Decker’s $4,000 score kept his performance record perfect through two days of action at NAPA Auto Parts Super DIRT Week. He enters the weekend’s major events having won the pole position and his heat race in both the big-block and 358-Modified divisions.

Last year Decker swept the preliminary prizes in both classes as well – and after winning the Gander Mountain 358-Modified Championship 150 he had an opportunity to complete an unblemished week. But he fell just short, finishing second in the VP Small Engine Fuels 200.

Decker would like to get out the broom this year, but he knows winning Saturday’s 150-mile 358-Modified event and Sunday’s 200-lap big-block classic will be a challenge.

“The cars feel equally as good so I want to be optimistic, but I’m just scared to death with what may transpire with (turns) three and four being the way it is right now,” said Decker, who has won the Gander Mountain 358-Modified Championship 150 six times (including the last four in a row) and the VP Small Engine Fuels 200 on four occasions. “If the track stays rough over there like it is right now, then trying to get a handle on things and make an educated guess is gonna be tough right.”

Varin, 42, authored the feel-good story of the night with his flag-to-flag cruise to the checkered flag in the second big-block 20-lapper. He piloted a car that carried an iconic number in Syracuse Mile history: the ‘Double-Zero’ so closely linked to Floridian Buzzie Reutimann, who won the first two editions of the VP Small Engine Fuels 200 in 1972-73.

Varin’s Bicknell car is owned by New Jersey’s Dave Cruickshank, whose Dover Brake business was seen on Reutimann’s No. 00 cars throughout the legendary dirt Modified driver’s career. Cruickshank, 80, has spent more than a decade either sponsoring Varin or fielding cars for the Fonda (N.Y.) Speedway regular, but until this year marks their first Syracuse assault as a team

Putting Cruickshank in Victory Lane at the Moody Mile was an unforgettable milestone for Varin, who had won one previous big-block heat race at the track.

“This is epic for me,” said Varin, whose career-best finish in 17 VP Small Engine Fuels 200 starts is fifth (1998 and 2005). “It gives me more joy to give (Cruickshank) a gift like this than anything else. To be the only driver in that race who could climb in that Double-Zero car and do that makes me feel privileged.

“And also I feel really privileged to have this man right here, Dave Cruickshank, as my car owner for the last upteen years. I have the utmost respect for him. He’s a first-class man.

“I feel honored to be the only driver to run a Double-Zero car for Dave other than Buzzie,” he added. “I know Buzzie is watching things down there in Florida and I’m sure that right now he’s really happy for Dave.”

Varin kept firm control of the heat after surging off the outside pole to grab the lead at the initial green flag. Polesitter David Hebert of St-Damase, Que., fell off the pace on the opening lap and wasn’t a factor, leaving Matt Sheppard of Waterloo, N.Y., to chase Varin for the remainder of the distance.

Dunn, 28, pulled off the evening’s most dramatic victory in the 20-lap finale. He slipped by race-long pacesetter Gary Tomkins of Clifton Springs, N.Y., to assume command on lap 16 and went on to defeat Justin Haers of Phelps, N.Y., by 1.983 seconds.

Dunn, who won a big-block heat for the second consecutive year, overtook Haers for second before seizing an opportunity in lapped traffic to grab the lead. Tomkins clipped the inside wall in turn three as he battled with a lapped car, cutting his left-front tire and bending his car’s front axle.

“Being third behind Justin I kind of found that outside (lane) going into (turn) three and it worked,” said Dunn. “I didn’t have quite enough to get all the way in front of (Tomkins), but once that lapped car slowed him up – I think he was gonna wait till coming off of turn four to duck under him, but I was able to roll around him.”

The top-nine finishers in each heat race who hadn’t locked themselves into the VP SEF 200 through Thursday’s time trials moved on to the $50,000-to-win headliner.

A Non-Qualifiers’ Race offering at least four more berths in the VP SEF 200 will be run on Sunday.