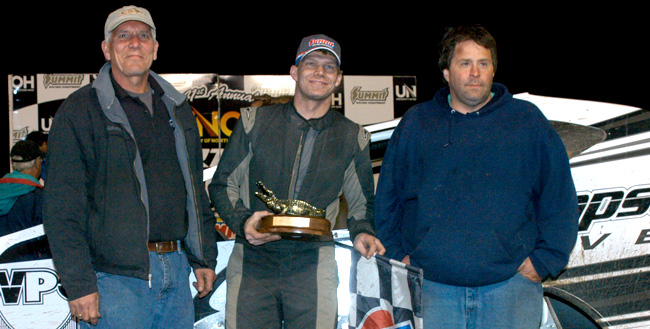 Rob Bellinger outlasted a handful of drivers, including a hard-charging Matt Sheppard, to claim the 50-lap Super DIRTcar Series Big-Block Modified main event in front of a packed crowd at Volusia Speedway Park on a chilly Saturday night.

“We were real close there toward the end,” Bellinger said. “Everybody was fairly quick and we were just able to come out ahead.

“We’ve had a fairly rough week. We wrecked the first night and we hadn’t been able to get the handle on the car. Tonight we got it and it’s a great feeling to be able to win the final.”

Bellinger, who started 11th, came on strong after the race’s first caution – a yellow for Sheppard, who went to the infield to change his right rear tire while running seventh.

“I just felt something wasn’t right with the car,” said Sheppard, who entered the main event with a two-point lead over Tim Fuller in the UNOH DIRTcar Nationals Presented by Summit championship.

“I didn’t know if it was a tire going flat or what. I was kind of just holding my own and then all of a sudden guys were driving by me left and right. I knew I had to do something, so we pitted and changed the right rear tire.”

Bellinger restarted eighth while Sheppard tagged the rear of the field in 28th. However, both quickly worked toward the front with Bellinger climbing to fourth on lap 17 and Sheppard finding himself inside the top 15 on the 19th lap.

Bellinger then advanced to third on lap 20 and into the runner-up position two laps later. On lap 23, he inched by polesitter Larry Wight at the flagstand for the top spot. The duo traded the lead for the next half-dozen laps before a caution for third-place running Stewart Friesen.

As the leader, Bellinger chose the outside lane for the restart while Sheppard restarted 10th. He was up to seventh on the ensuing lap, sixth on lap 30 and fourth on the 33rd circuit.

Meanwhile, Bellinger battled with Wight for the lead in thick lapped traffic, allowing Brett Hearn and Sheppard to join in the skirmish on the slick track. Sheppard maneuvered from fourth to second on lap 40 before a caution on the following lap bunched the field up.

“I had all but written off the championship after we pitted and then the next thing you know I’m back in the hunt,” he said. “I couldn’t believe it. We were battling for the lead at the end.”

Wight again chose the outside lane and beat Sheppard to the bottom in turn one, gaining the momentum and holding onto the top spot. Three laps later the final caution gave Sheppard one last chance, but Wight was able to repeat his strong move off the start and into turn one. He held on for the win by a little more than one second.

“I knew I had to get a good run down the frontstretch and as long as I could get to the bottom and kinda hold him down there, I figured we had a good shot at winning it,” Wight said. “We really hit the setup right. I could run right through the middle and come off the corner real good. We’ve got to just mark it to the setup. The car was great.”

“It just means it was a good trip south for us,” said Sheppard, who won Friday night’s feature. “The car’s in one piece. We picked up a win, a second and a championship. We’ll head up north with a little momentum.”

Fuller, Rick Laubach, Sheppard and Wight were each the quickest in their qualifying session with Fuller posting the best overall lap of 17.054 seconds.

Fuller, Britten, Sheppard and Wight led all eight laps of their heat races to record victories.