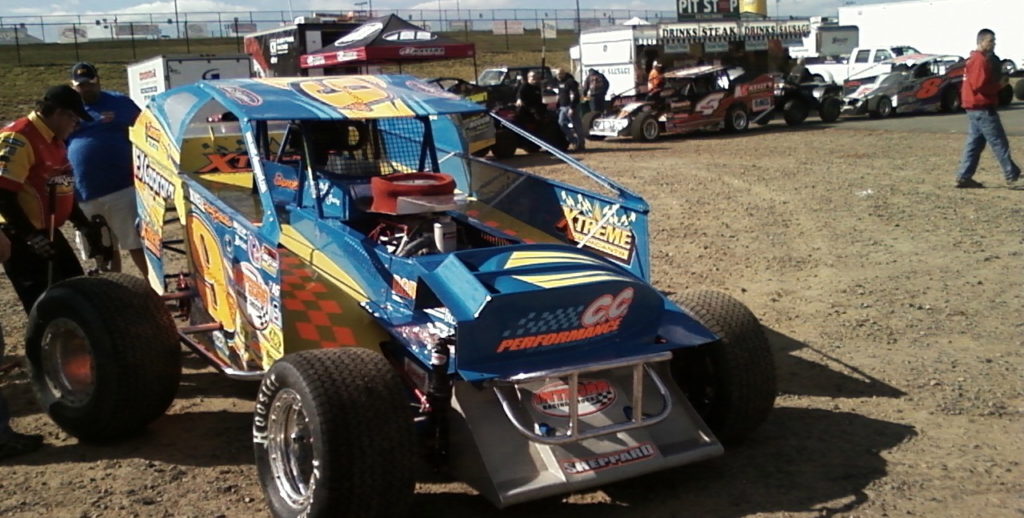 Nov. 2, 4:21 p.m. Lineups for tomorrow’s B-Feature races and incomplete A-Feature lineup posted below. A lineup will be updated as results come in. B-Features will run Saturday, Nov. 3, after opening ceremonies and the A-Feature will run after the World of Outlaw Late Model Series B-Features.

Fired up for timed hot laps

Time hot lap sessions will determine starting lineups for tonight’s qualifying heats, where drivers will compete for 1 of 28 spots in each of this weekend’s two A-Features. See the charts below for qualifying groups.

Nov. 1, 3:40 p.m. Big-Block Modified competitors lined up for inspection and reservation this afternoon for PEAK Motor Oil World of Outlaws World Finals presented by NAPA Auto Parts at The Dirt Track at Charlotte.

Some of the biggest stars of the series have already arrived, including two-time series champion and current point leader “Super” Matt Sheppard; Sheppard’s biggest competition this year, Jimmy Phelps; Brett “the Jet” Hearn, fresh from winning both the Eastern States 200 at Orange County Fair Speedway in Middletown, N. Y., and the VP Small Engine Fuels 200 at the New York State Fairgrouds in Syracuse, N. Y.; the legendary Danny Johnson, “the Doctor,” hoping to make a comeback in the last two series features of the season; World of Outlaws Late Model Series regulars Tim Fuller and “TMac” Tim McCreadie …

Nov. 1, 12:11 p.m. Super DIRTcar Series competitors face a busy day ahead, with most of the qualifying events for Friday’s and Saturday’s features scheduled for today. Don’t forget to listen or watch at DIRTvision, and follow the three series on Twitter: @SuperDIRTcar, @WorldofOutlaws, and @WoOLateModels. Twitter followers can also search for the hashtag #AllDirtRoads to see what’s being said, and, of course, Tweet your PEAK World Finals presented by NAPA pictures there to share them with other fans.

Modified competitors will qualify for positions, a 28-car field maximum, in Friday’s and Saturday’s A-Feature separately with heat races, B-Features, and C-Features

Qualifying points and heat points will be awarded

Timed hot lap sessions are scheduled for Thursday, Nov. 1, and will be similar to time trials in a usual series event. Hot laps will be conducted in two definitive sessions, with the first session determining starting lineups for Friday’s qualifying heats and the second for Saturday’s. Each session consists of 2 consecutive green laps for all competitors. Each lap will be timed, and the fastest time of record will determine heat qualifying position, with fastest car starting first, second-fastest second, and so on.

Following timed hot laps on Thursday will be Friday’s qualifying heat races, 8 laps each. Cars who don’t qualify may compete in the C-Feature for spots in the B-Feature, which will run before its respective A-Feature Friday.

Each A-Feature is 40 laps in length. Caution laps will not count. The Dirt Track at Charlotte is a 4/10-mile track. The finish must be green-white-checkered.

Oct. 24, 2012 (Preview) After a spectacular season in the Super DIRTcar Series, Big-Block Modified drivers are looking forward to the finale in Charlotte, PEAK Motor Oil World of Outlaws World Finals presented by NAPA Auto Parts at The Dirt Track at Charlotte Thursday, Nov. 1, through Saturday, Nov. 3.

“It’s almost like the Mecca of dirt track racing,” said Jimmy Phelps, of Baldwinsville, N. Y., currently second in points in the Super DIRTcar Series. “You’ve got the three major traveling series all on the same property in front of a huge crowd. It’s an unbelievable facility.”

Performing well at the two Super DIRTcar Series features at The Dirt Track at Charlotte, set for Friday, Nov. 2, and Saturday, Nov. 3, is especially vital for Phelps, who trails the series point leader and two-time defending champion Matt Sheppard by just 92 points. Points are awarded for each 40-lap race according to a 150-point schedule.

“It’s the end of the year and everything’s on the line,” Phelps said.

In addition to gearing up for the climactic finale, the last chance for teams to make it to the top, the Super DIRTcar Series competitors are also looking forward to three days of exhilarating racing in front of thousands of fans.

“There’s nothing like racing under the lights in Charlotte in front of a packed house,” said Sheppard, of Waterloo, N. Y.

“That’s a great, spectacular event that we always look forward to,” said Brett Hearn, currently third in points and coming off two big series victories at Super DIRT Week in Syracuse, N. Y., and Eastern States Weekend in Middletown, N. Y. “It’s great to be part of the three major World Racing Group series all at one place at one time, and Charlotte has a lot to offer besides great racing. It’s a great place to go visit.”

For tickets and more information about PEAK Motor Oil World of Outlaws World Finals presented by NAPA Auto Parts one, visit the Charlotte Motor Speedway website at www.charlottemotorspeedway.com/dirt. Follow @SuperDIRTcar on Twitter for the latest news and updates about the Super DIRTcar Series, including race results.