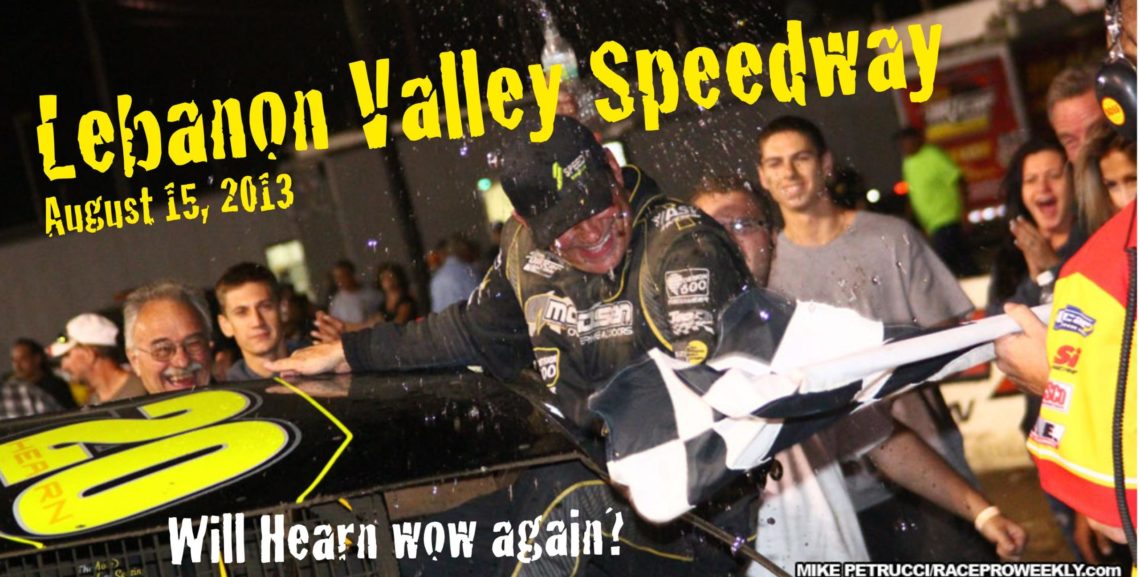 Point leader fueled by momentum from win in Michigan

WEST LEBANON, N. Y. – Thursday, August 8, 2013 – Perhaps the biggest comeback story of the season last year happened atLebanon Valley Speedway during the Super DIRTcar Big-Block Modified Series “Mr. DIRT Track U.S.A.” After a two-race hiatus from the series, brought on by sudden illness, Brett Hearn got back behind the wheel and pulled off a thrilling victory.

“I would like to be able to recreate that, but the chances of doing that are slim. Just to win it the normal way would be nice,” said Hearn. His impressive victory at “The Valley of Speed” was the first of several last season, including winning the prestigious NAPA Auto Parts Super DIRT Week VP Small Engine Fuels 200. Hearn finished the Super DIRTcar Series season second in points to Matt Sheppard by a margin of just 45.

The Super DIRTcar Series returns to Lebanon Valley Speedway this year for the 100-lap, $17,500-to-win “Mr. DIRT Track U.S.A.” Thursday, Aug. 15, and, while Hearn doesn’t expect to pull off a feat like last year’s, he still has some tricks up his sleeve.

“I’m looking forward to big things,” said Hearn, whose recent success at Merrittville Speedway in Thorold, Ontario, and victory at I-96 Speedway in Lake Odessa, Mich., has helped propel him to the series point lead.

“We got a lot of momentum from Merrittville,” Hearn said just after Tuesday’s win in Michigan. “To come from 13th last night after a lackluster heat race, and to get to third, that was a big deal for me last night. I didn’t think that was going to happen, I didn’t think it was possible. That gave me a little confidence going into today. Now, coming off this, and getting ready for next Thursday night, I feel really good about this car, and I’m really comfortable in it.”

Pit gates open at 3 p.m. and grandstand gates at 5 p.m. for the Lebanon Valley Speedway “Mr. DIRT Track U.S.A.” Thursday, Aug. 15. General admission tickets are $20 for adults or $7 for children. Assigned seating is also available at $22 per ticket. For more information, call (518) 794-9606 or visitwww.lebanonvalley.com/LVS_Home.html.