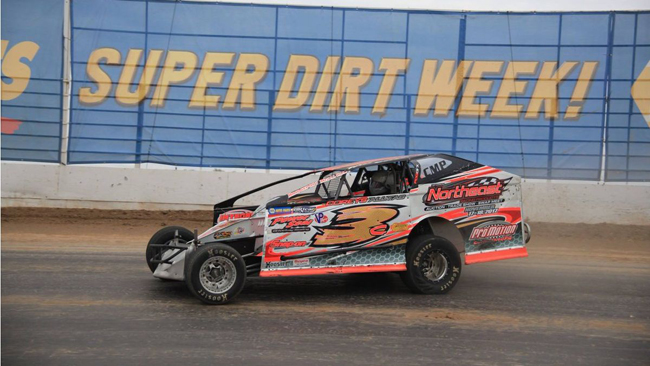 by Mandee Pauch, via FloRacing.com

OSWEGO, NY — Sept. 5, 2018 — It is the biggest Big-Block Modified race in the world and holds the largest purse of any short track event for the Modifieds.

It is the five-day extravaganza known as NAPA Auto Parts Super DIRT Week raced at Oswego Speedway in Oswego, NY. Oswego Speedway, known for its high speeds on asphalt, gets transformed once a year into a dirt track just for this prestigious event.

Why you may ask?

In addition to being the most prestigious Big-Block Modified race in the world, it also pays the most money. Sunday’s Billy Whittaker Cars 200 Feature pays $50,000 to win.

Let’s see why some of the top drivers in the Northeast say drivers should race NAPA Super DIRT Week:

‘Mad’ Max McLaughlin, who has been a strong contender on the series this season feels the switch to the 5/8-mile has made it more of a leveled playing field for all drivers than years past.

“Bringing Super DIRT Week to Oswego has leveled the playing field in my opinion,” McLaughlin said. “It’s made it so your local Saturday night racer can come and compete to win on the sport’s biggest stage. Everyone misses the mile, but I love what they have done to make up for it.”

The driver out of Clifton Springs, NY, Gary Tomkins, has come very close to tasting NAPA Super DIRT Week victory, but has unfortunately come short twice; once was to Vic Coffey back in 2002, and the second time was to Tim Fuller in 2004.

“There’s a few reasons I think drivers should run Super DIRT Week,” Tomkins said. “Number one: obviously the biggest reason is the money. $50,000 to win is nothing to sneeze at, and it’s $1,500 to take the green. So, if you qualify, at least you’ll walk away with something.

“Number two: Prestige. Even though it’s not Syracuse, you still have to beat most of the best to win the race and with pit stops, it means it’s truly a team race.

“Number three: Applies to Oswego versus Syracuse. Now you can take your Saturday night car and be competitive. More money spent doesn’t mean nearly as much here. It’s all about the best package. Extra hours on the engine dyno means very little here. The tire bill will be less. We ruined one set last year when it rubbered up early in the race on Sunday but then the rubber went away and tires were actually sealing up. All of the laps there usually takes maybe a drum and a half of fuel at the most, Syracuse was almost double that.”

With only three Super DIRTcar Series victories to his name, the driver out of Phelps, NY, Justin Haers, knows how special this event is to have your number at the top of that score board come lap 200.

“I think it’s our Daytona 500,” added Hares. “A lot of fans that go to maybe one or two races a year, that’s the one they choose to go to. I have people that I know that come out of state every year and only go to that race. It’s our biggest paying event that we have. It’s a prestigious race.”

This year will be ‘Magic’ Mike Mahaney’s third ever attempt at tackling NAPA Super DIRT Week. Ever since the move to Oswego, Mahaney feels this race is more appealing than ever to many drivers.

“Number one, it pays $50,000 to win,” Mahaney said. “Anybody that has a big block can go to Oswego. You set the car up and change the gears, it’s not like Syracuse where you needed special equipment. The first year was tough on equipment but last year the track was smooth, wide, racy and easy on the car.”

A week full of racing at the historic 5/8th-mile all comes down to 41 Big Block Modified drivers looking to write their names in the history books next to the names of Buzzie Reutimann, Bob McCreadie, Brett Hearn, Stewart Friesen and countless other drivers.

The granddaddy of all Big-Block Modified events will begin when cars hit the track for the first time on Wednesday, October 3rd for practice and will continue until the final green flag falls at 2 p.m. on Sunday, October 7 for the 200-lap main event in the hunt for the $50,000 paycheck.