WHAT TO WATCH FOR: The Valley of Speed Takes Center Stage with $25,500-to-win Mr. DIRT Track USA

WEST LEBANON, NY – Big speed, big brakes, and big-time bravery are what the Super DIRTcar Series stars will need if they want to take home the $25,500 grand prize at Lebanon Valley Speedway on Saturday (Sept. 4).

Lebanon Valley Speedway’s Mr. DIRT Track USA is one of the most highly anticipated events on the Series schedule. Its long straightaways and high-banked paperclip turns require a very different approach and setup that drivers need to be extra prepared for.

The Series is looking to complete its 16th race of the season with an exciting September-November run on tap, featuring some of the biggest events of the year.

Stewart Friesen currently leads the points standings with seven-time Series champion Matt Sheppard on his heels. Meanwhile, third through seventh in the points standings are only separated by a mere 20 points. Those drivers are Peter Britten, Mat Williamson, Mike Mahaney, Max McLaughlin, and Billy Decker.

Get your tickets for Mr. DIRT Track USA here.

ON THE DRAWING BOARD WITH DRELLOS

Demetrios Drellos, from Queensbury, NY, is running 14th in points but he feels the season starting to turn around. Double D hasn’t found the rhythm he’s looking for yet, but his qualifying results have improved, putting him in a better position to find consistency.

Drellos’ last visit to Lebanon Valley ended early after heavy contact with the outside retaining wall in Turn 1. However, he felt he had a fast car and is now anxious to come back and get more laps with his Big Block. 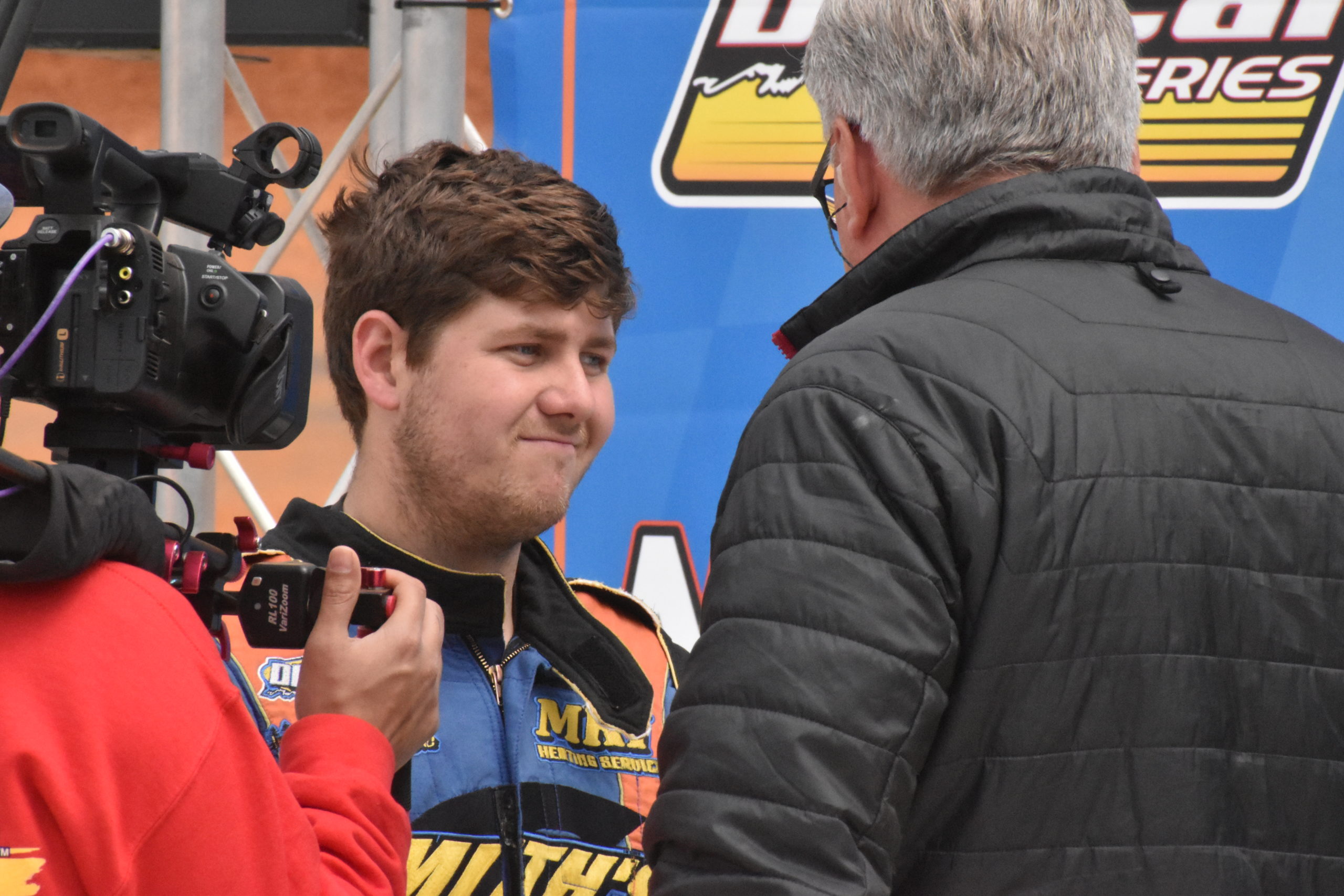 “To go to Lebanon Valley, it takes more preparation than 95% of the places we go to,” Drellos said. “Everything is different. As much as people want to say it’s not. It is. And that’s a good thing. Every track has its own personality but to go to Lebanon it takes different tires, a different setup, and a different mentality. It’s treated me well other than that last time. That was just an unfortunate circumstance. It was a lack of judgment on my part. Just don’t go to the outside of some people I guess.”

Drellos raced there weekly and in 43 starts collected four wins in the Small Block Modified division. He conceded the Big Block is a whole new ballgame, though. 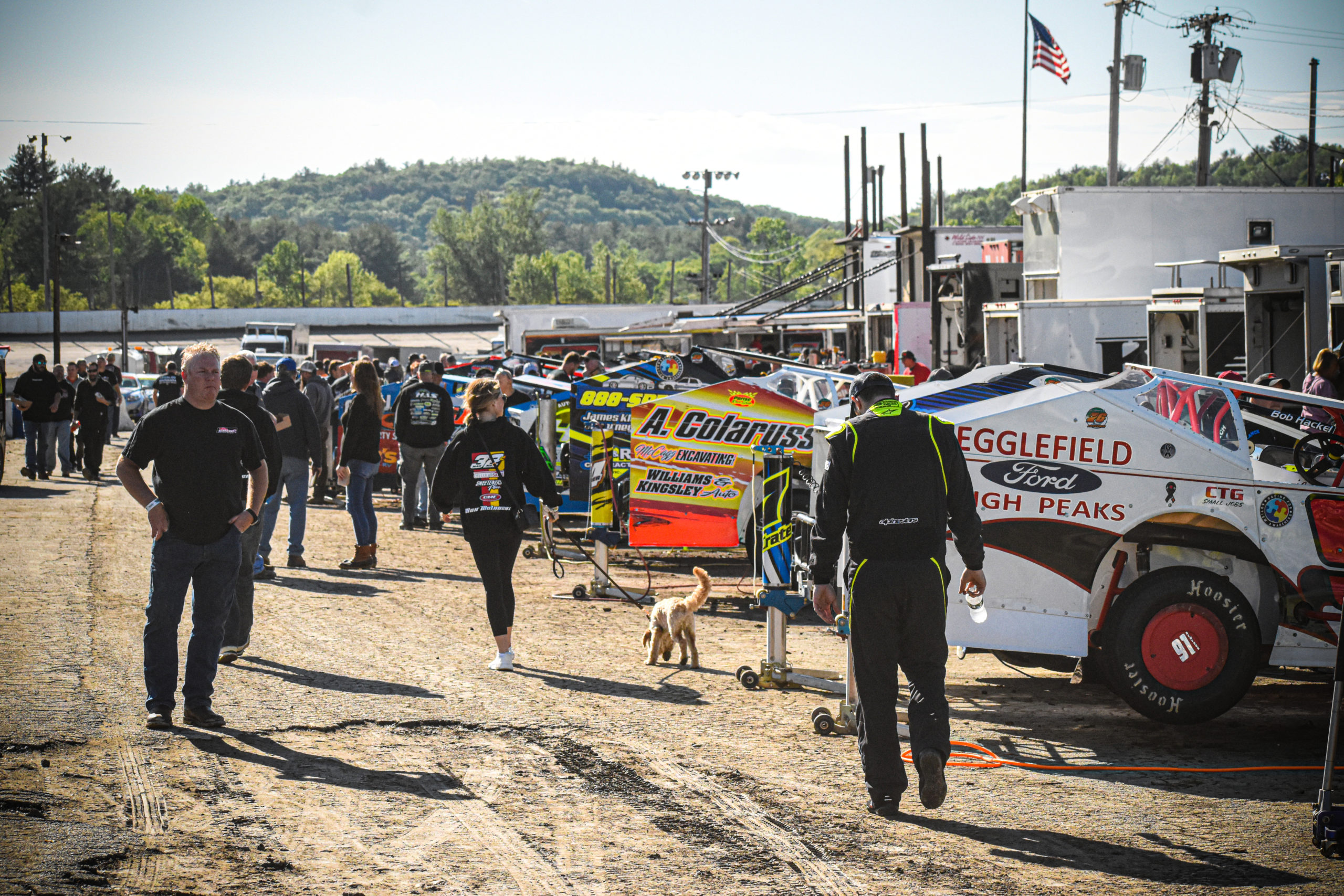 “I haven’t been there in a few years other than Mr. DIRT Track USA,” Drellos said. “I like the place. It’s been good to me. It has character. You are racing the closest and the fastest of anywhere. There are similar speeds but here you are racing side by side a lot at those speeds. I have a lot of 358 (Modified) laps there. The track gets a lot smaller in a Big Block. You wouldn’t believe how much faster the Big Block is. I’ve only run it like five or six times and that’s not a lot of laps compared to most of these guys.”

The #111 competes against the biggest teams in Big Block racing at every tour event and he does so with a limited budget and crew. He knows it takes some extra time to get ready to race at The Valley of Speed.

He’s thankful for the laps he has there because there is nothing like it on the schedule.

“As much throttle time you give at Lebanon, you spend just as much time braking,” Drellos described. “It’s the only racetrack that you have to care what the car is doing under braking. On most tracks, you are on the brakes for just a split second where yes you do give it thought but at The Valley, you actually have to worry about what the car is doing when you are slowing down for the corner.

“The cars handle very uniquely there. The setup and driving style is just totally different. If you don’t race it weekly, you aren’t used to it. Look at the fast guys like Kenny Tremont Jr., Andy Bachetti, and Eddie Marshall. All those local guys have a chance to win, absolutely.”

No one knows how to turn laps at The Valley of Speed like Kenny Tremont Jr. It’s been his home track since the 1970s. Tremont has 10 Series wins at Lebanon Valley with his first coming in 1985. Only Brett Hearn (15) has more Series wins there than the 59-year-old driver from West Sand Lake, NY. 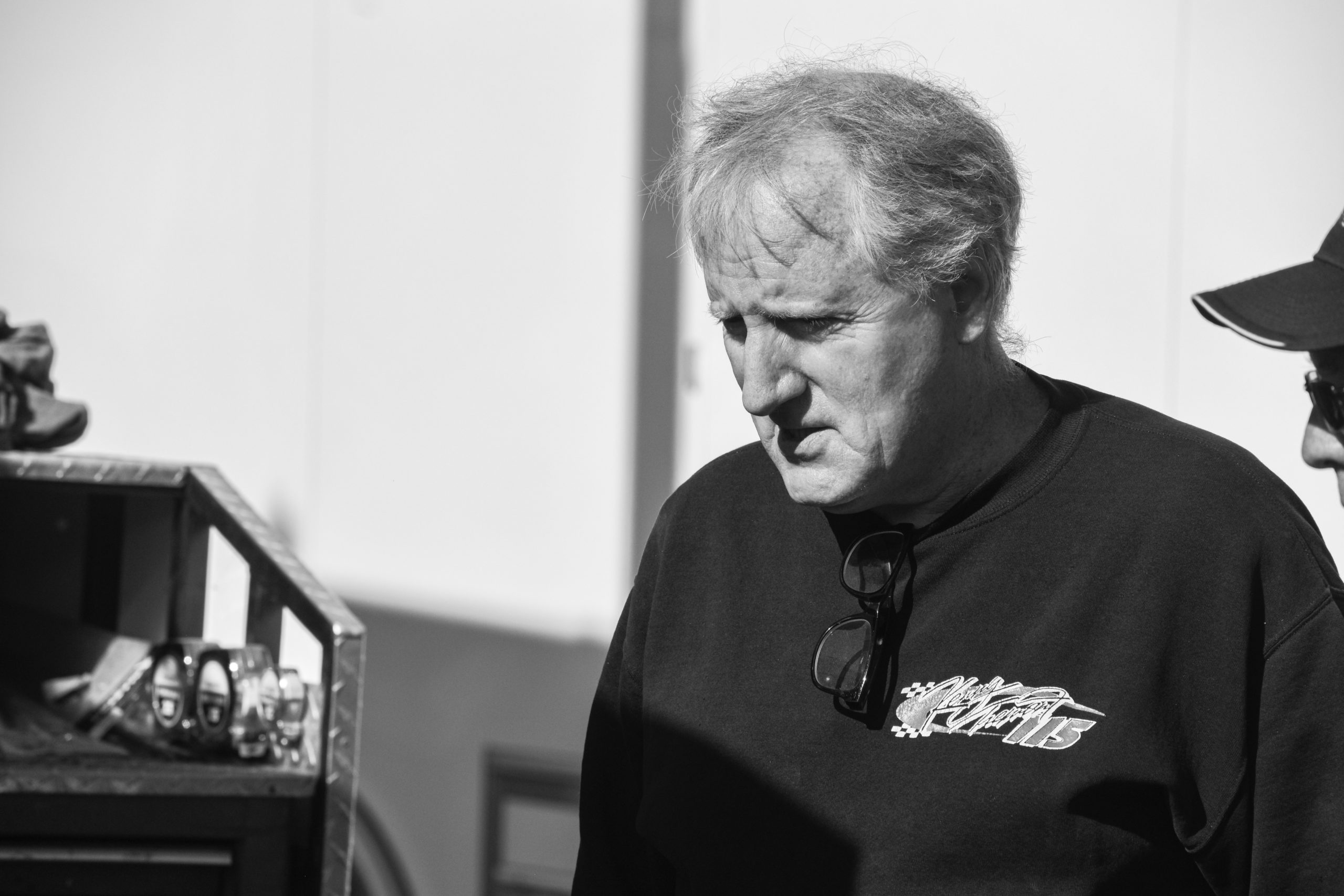 Kenny Tremont Jr. hard at work in the pits at the last Series event on May 31 of this year. PHOTO: Joe Grabianowski

Before Sheppard’s win at The Valley earlier this year, Tremont had won the last two Series visits to the ⅝-mile behemoth. Notably, those back-to-back wins in 2018 and 2019 broke a drought that went back to 2005.

Tremont has 140 wins at Lebanon Valley including one earlier this year in Hoosier Racing Tire Weekly championship competition.

The high banks are tough on outsiders and many of The Valley faithful are looking to defend their home turf. Andy Bachetti is a past Mr. DIRT Track USA champion and currently leads the track points by a very slim margin over Marc Johnson and Brett Haas, who both finished in the top-five when Mr. DIRT Track was run. 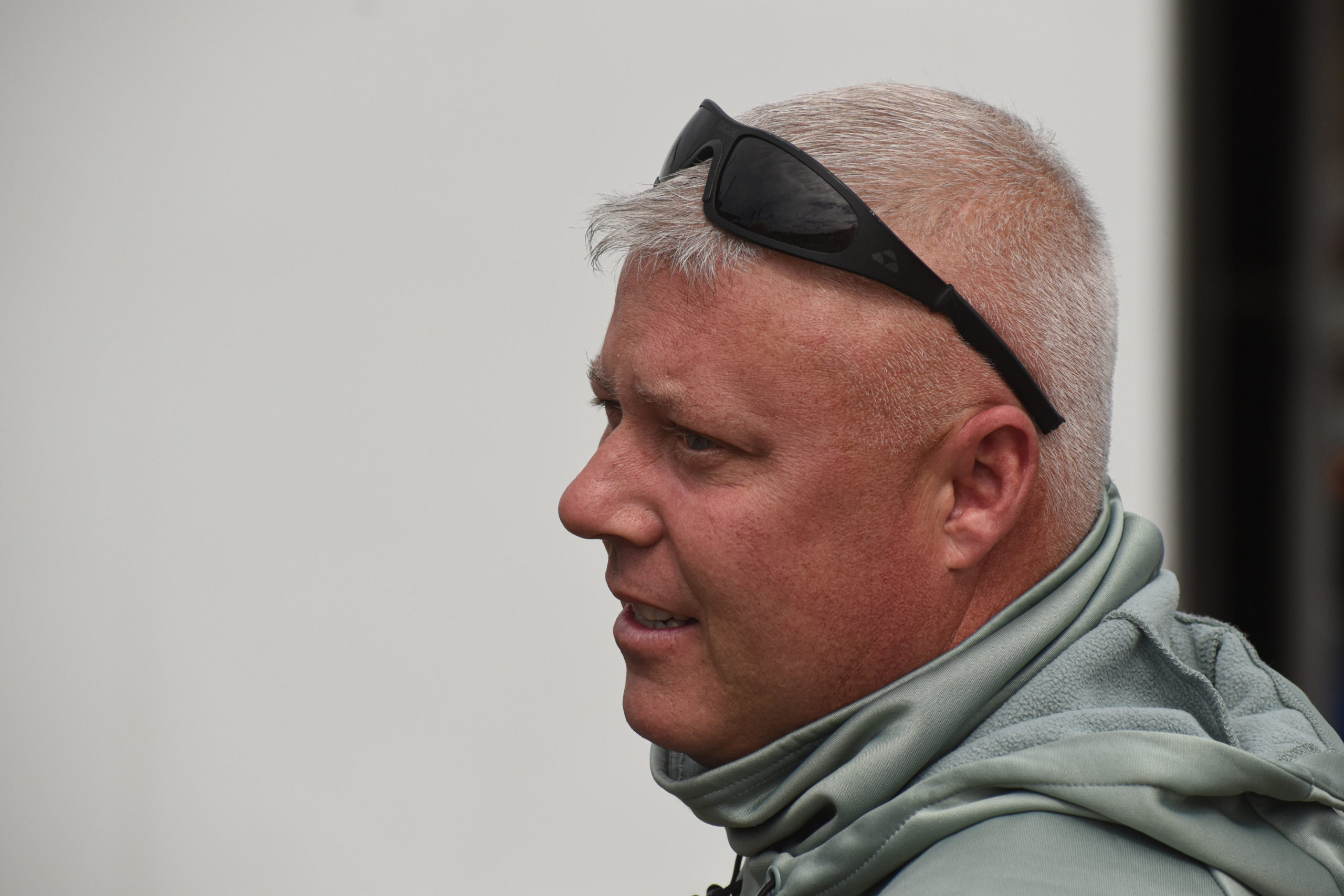 Mr. DIRT Track USA is a points-paying race for the Lebanon Valley Speedway weekly racers. And with it only paying show-up points, Bachetti will be crowned the champion of The Valley of Speed.

Living legend Eddie Marshall picked up a win this year, ending his winless drought at the West Lebanon, NY speedway. The driver of the #98 will be looking for the podium against the premier Super DIRTcar Series drivers this Saturday.

It’s always exciting to pick out a fast driver in the back of the pack and watch him work his way through the field to the front. These are the last four drivers to be named the hard charger of the race:

Rookie driver Tim Sears Jr. in the yellow #83X picked up 18 positions finishing sixth from 24th at the Orange County Fairground Speedway on Aug. 12. That bodes well for Sears as Lebanon Valley and Orange County are both ⅝-mile tracks.

Jack Lehner and Mike Mahaney were the hard chargers in the Twin 60s at Land of Legends Raceway on Aug. 4. Lehner made up an incredible 20 positions in race one and Mahaney went one step further, grabbing a whopping 28 spots in race two and making his way onto the podium. 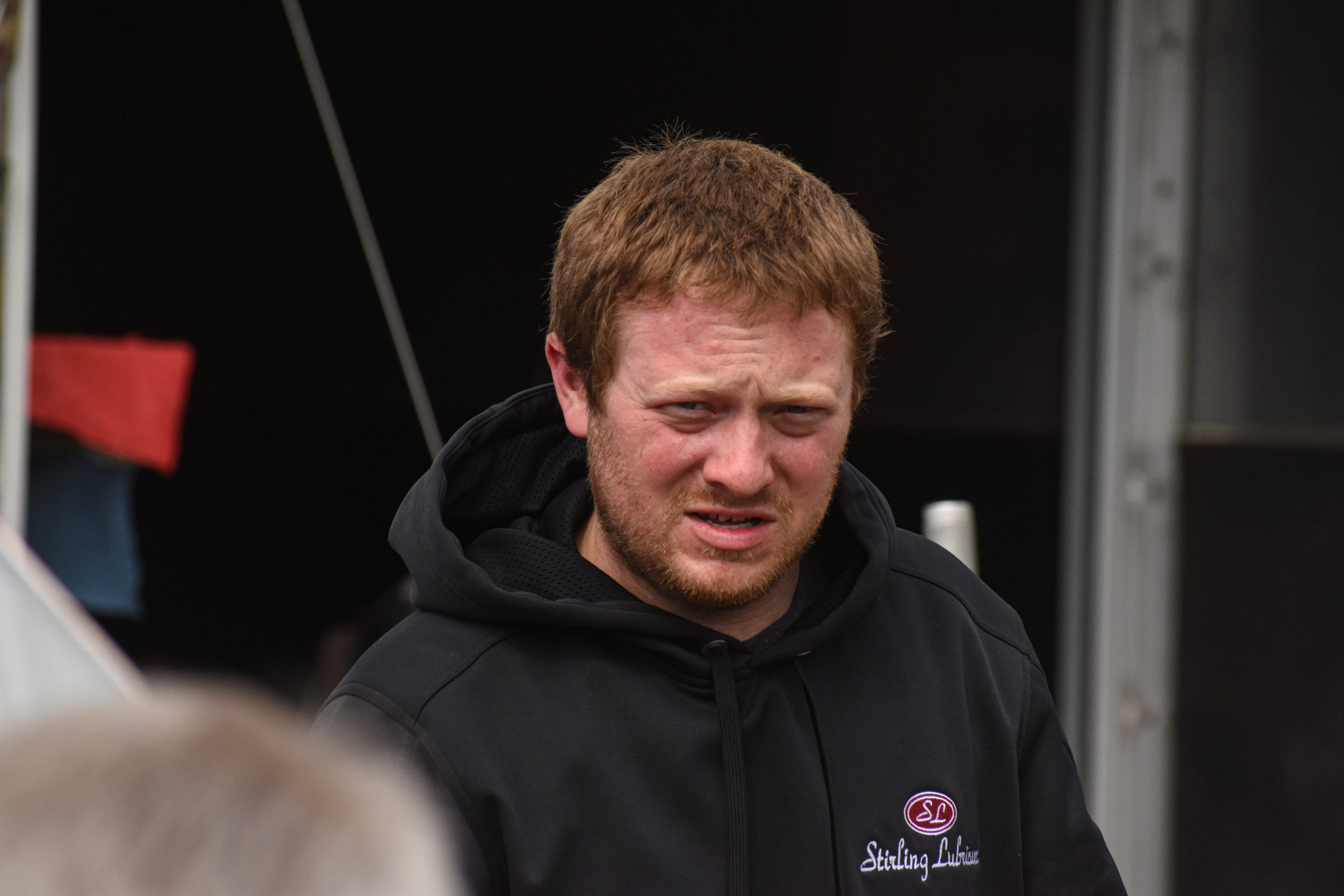 Erick Rudolph was +20 at the last visit to Weedsport Speedway. Rudolph is a perennial hard charger. The Ransomville, NY driver passed 15 cars at Lebanon Valley on May 31 for the honors, further proving the #25R is a potential threat even if forced to start in the back.

Stewart Friesen, Demetrios Drellos, Tim Fuller, Matt Sheppard, Max McLaughlin, and Chris Hile have all secured their guaranteed start for the Billy Whittaker Cars 200 at NAPA Super DIRT Week (Oct. 6-10). Along with Mr. DIRT Track USA paying $25,500 to the winner, it will also award a guaranteed starting position at Oswego Speedway. It’s one of only five chances remaining for drivers to secure the prestigious starting spot in the historic $50,000-to-win 200-lap race.

Around The Turn: The Super DIRTcar Series will return to Weedsport Speedway for the two-day Cavalcade Weekend, Friday and Saturday, Sept. 11-12.

PrevPreviousSEPTEMBER TO REMEMBER: More than $300,000 in purse on tap in September for Super DIRTcar Series
Next9/4/21 — Lebanon Valley SpeedwayNext