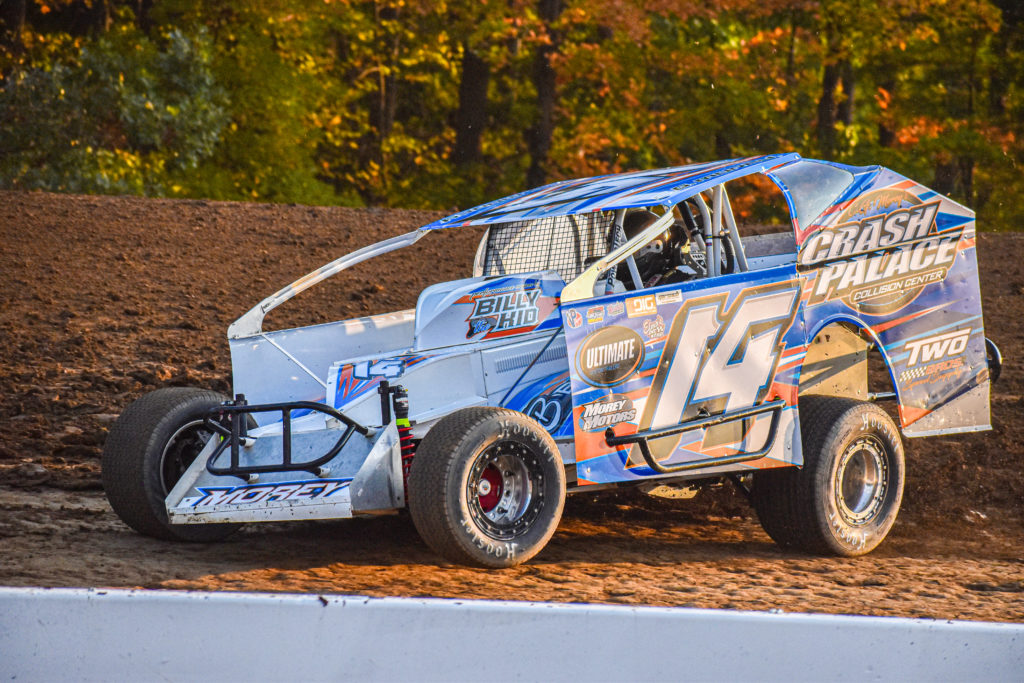 With a win at Land of Legends Raceway last Saturday, current points leader and seven-time Series champion Matt Sheppard added a couple more points to his lead (+118) over second-place Billy Decker. If he can hold on to that lead at the end of the NGK NTK World Finals at The Dirt Track at Charlotte (Nov. 4-6), he’ll become the winningest champion in Series history.

Peter Britten is stalking the top two drivers back in third place (-138). He has one win and nine top-10s in 14 Super DIRTcar Series points-paying starts in 2021. Britten picked up the second Series win of his career at Land of Legends Raceway earlier this year. The Australian driver has 12 career wins in weekly DIRTcar Big Block racing at Malta making him a major threat.

The battle throughout the top-10 in points is extremely tight. Defending champion Mat Williamson and Ransomville, NY’s Erick Rudolph are tied for fourth. These two haven’t been able to get away from each other all year as they were named DIRTcar 358 Modified co-track champions at Ransomville Speedway.

Max McLaughlin in the #32C runs sixth just four points behind the pair tied for fourth.

Chris Hile, from Syracuse, NY, sits seventh in the championship points standings, making him the favorite for this year’s rookie of the year. Hile also has three top-fives and a guaranteed start for the Billy Whittaker Cars 200 Sunday, Oct. 10 at Oswego Speedway to close out NAPA Super DIRT Week XLIX. The driver of the #5H finished 10th at Albany-Saratoga last October.

Tim Sears Jr., driver of the #83JR, is the next candidate for the rookie title. Sears came out of the gate strong, scoring two top-fives in a row but has struggled at the mid-point of the season.

Jordan McCreadie, in the Flack’s Hi-Rise Concrete Restoration #28, sits 13th in points but an upset win could put him over the top late in the season. McCreadie has also been cutting his teeth in the DIRTcar 358 Modified Series where he has three top-10s in three starts so far in 2021.

The last time the Series swung through Malta, NY was for DIRTcar OktoberFAST presented by DIRTVision. Anthony Perrego won a special 60-lap thriller. The driver of the #44 is a favorite going into the Massive Malta Weekend as he picked up the track championship this year as well.

Stewart Friesen, NASCAR Camping World Truck Series star, will be on hand to take on the Series. He has three Series wins at Albany-Saratoga so far in his career, and six wins with the Super DIRTcar Series this year.

Demetrios Drellos won his first Series race on his hometrack in 2019. Can Double D repeat the feat?

The high level of the local heavy-hitters at play will make it another stout field this season. The likes of Mike Mahaney, Bobby Hackel IV, Matt Delorenzo, and Kenny Tremont Jr. will all be threats to steal the win.

Every Super DIRTcar Series race that pays $10,000 or more to the winner comes with a guaranteed start in the Billy Whittaker Cars 200 at NAPA Super DIRT Week (Oct. 6-10). Only two more chances remain to claim one of those elusive spots – this weekend at Albany-Saratoga and the Demon 100 at Brewerton Speedway (Tuesday, Oct. 5).

If you can’t make it to the track, don’t forget to watch live on DIRTVision with either the Platinum annual FAST PASS for $299 or monthly FAST PASS for $39/month. Download the app today.

Around The Turn: All eyes turn to NAPA Super DIRT Week XLIX which officially begins racing activities at Brewerton Speedway on Tuesday, Oct. 5 for the $10,000-to-win Demon 100. It is the last chance for drivers to secure a guaranteed start for Sunday Oct. 10’s Billy Whittaker Cars 200.