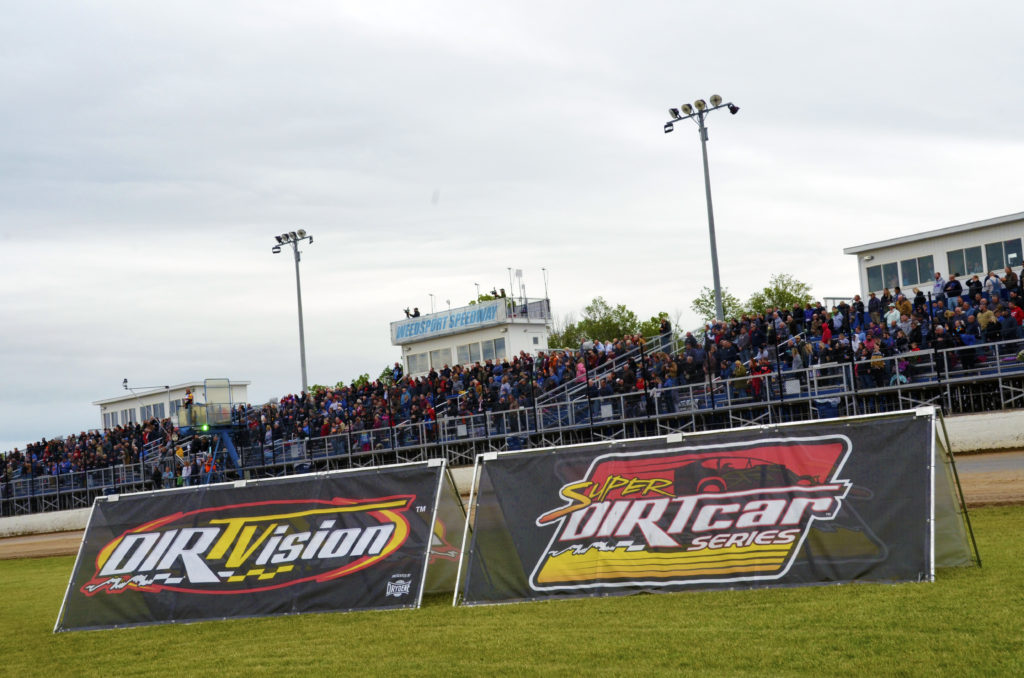 WEEDSPORT, NY – The long-awaited Cavalcade Cup weekend (Saturday to Sunday, Sept. 11-12) is set to thrill fans at the historic 3/8-mile premier dirt track – Weedsport Speedway. With two Super DIRTcar Series Features (60 and 100 laps), four divisions, and a track designed for exciting racing, the inaugural Cavalcade Cup is primed to be a can’t-miss event.

While the Super DIRTcar Series season is winding down, the big shows are winding up. The doubleheader weekend at Weedsport presents the chance for one driver to walk away with more than $17,000 in winnings between the two days and one chance at a guaranteed NAPA Super DIRT Week starting spot.

It’s also a chance for drivers to catapult up the points standings with full points being awarded both nights. Drivers and teams have to come in knowing the competition will be at an all-time high in the Super DIRTcar Series. A few tenths in Time Trials can put top and mid-level teams into catch-up mode as they have to work hard to make the show.

Tickets and camping are available here.

BEST OF THE NORTHEAST IN ONE PLACE

The last four Super DIRTcar Series events at Weedsport Speedway have delivered four different winners. NASCAR Truck Series-star Stewart Friesen claimed his third career Weedsport Speedway victory with the Series in July at the Hall of Fame 100. Earlier in the year, 2019 Series champion Mat Williamson claimed his sole win of the year at the track.

While they’ll be favorites to win again, other former winners like Erick Rudolph, Weedsport Speedway promoter Jimmy Phelps and Billy Decker will be in attendance to not only try and make it five different winners in a row but to claim their first win of the season.

With the event originally announced in 2019 for the 2020 season, the anticipation for the Cavalcade Cup has been building. Back-to-back full-point Super DIRTcar Series races are a rarity on the calendar. Notably, the last time it happened was at Weedsport Speedway in July of 2009.

Both races were won by Ryan Phelps from Fulton, NY in the #99 Big Block Modified – his only two Super DIRTcar Series Feature wins. After coming up short in the 2009 Weedsport Speedway track championship, Phelps said he refocused his efforts on setting up for the Super DIRTcar Series doubleheader and it paid off for a career night.

Can anyone match Ryan Phelps’ feat?

On Saturday (Sept. 11), the elite drivers of the Northeast will tackle Weedsport in a 60-lap Feature and a grand prize of $7,500. The next day (Sunday, Sept. 12), it’s 100 laps around Weedsport and $10,000 for the first Big Block across the line. The big check also comes with a guaranteed start in the Billy Whittaker Cars 200 at Oswego Speedway during the 49th NAPA Auto Parts Super DIRT Week (Sunday, Oct. 10).

With the conclusion of the Hoosier Racing Tire Weekly Championship, full-time Series drivers’ bonus points have been awarded. Those drivers received 100 points for each DIRTcar Racing event they competed in outside of Super DIRTcar Series races with a maximum of 1,200 points.

Seven-time Super DIRTcar Series champion Matt Sheppard is the current points leader with the pride of Brisbane, Australia, Peter Britten, on his heels – 89 points back.

Heavy-weights Billy Decker and Mat Williamson are tied for third, 104 points back from Sheppard. Mike Mahaney and Max McLaughlin aren’t far behind either in fifth (-127) and sixth place (-137), respectively.

Saturday’s bill also includes a $1,000-to-win DIRTcar Sportsman Modified Feature. The Sportsman will join the Super DIRTcar Series on Sunday, as well, along with the Empire Super Sprints.

Around The Turn: The Super DIRTcar Series will return to Land of Legends Raceway for the third annual Gerald Haers Memorial on Saturday, Sept. 18. It’s a $10,000-to-win, 100-lap Feature with a NAPA Super DIRT Week guaranteed start, plus thousands of dollars in bonus awards for racers through the finishing order.