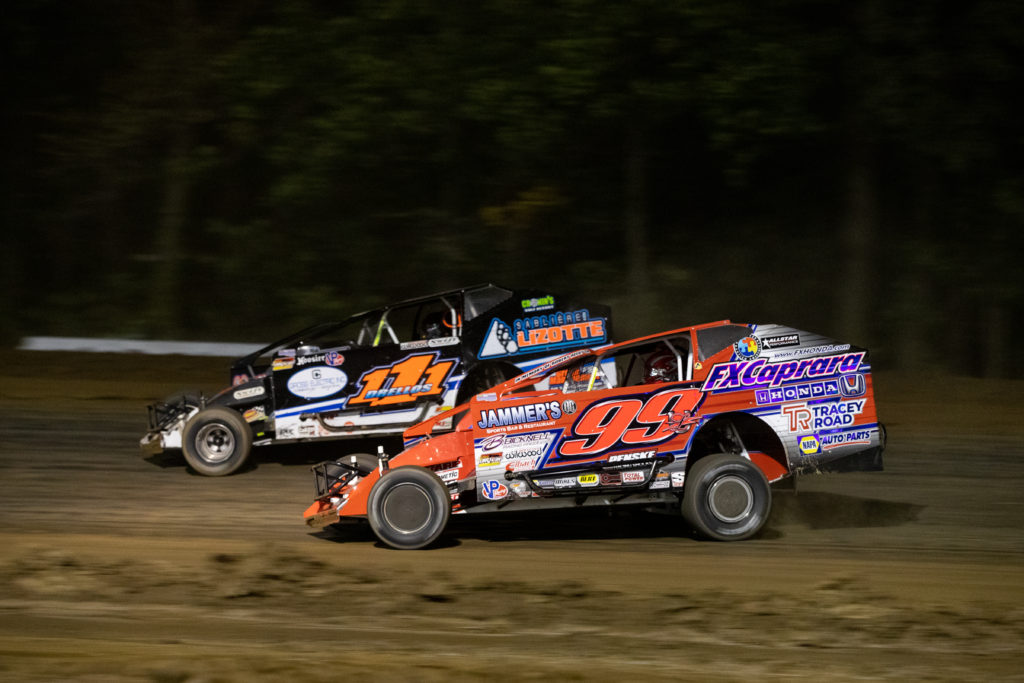 WHAT TO WATCH FOR: Demon 100 kicks off Racing’s Biggest Party with a dose of Big Blocks at Brewerton

BREWERTON, NY – Crisp air, clear skies, and changing leaves are all upon us for the greatest week in dirt racing. Add a little sulfur to the mix Tuesday night at Brewerton Speedway and “The Demon” awakens.

The 49th annual NAPA Super DIRT Week hits the ground running with the $10,000-to-win Demon 100 at Brewerton Speedway on Tuesday, Oct. 5. The stars of the Super DIRTcar Series will be on hand to secure vital champion points and the final guaranteed starting spot for NAPA Super DIRT Week.

Matt Sheppard is racing for his eighth Super DIRTcar Series championship but talented veteran Billy Decker and Australia’s star driver Peter Britten are keeping him from running away with the title.

Race fans and teams are pouring into Central New York for the biggest week in dirt racing and the Demon 100 will be an extra dose of excitement to open the week.

CAN SUPERMAN FLY HIGHER THAN THE JET?

Matt Sheppard has put together another championship run over the second half of the 2021 season. After admittedly starting off his usual pace, Sheppard drilled down on his game and started putting together high points value finishes back-to-back.

An eighth Super DIRTcar Series championship could be just on the horizon. The #9S team is in a rhythm going into end-of-season premier events like NAPA Super DIRT Week and the NGK NTK World Finals. The eighth would put Sheppard over Brett Hearn on the all-time championship wins list.

Jack Lehner, from Saratoga Springs, NY, is in his sophomore season on the Super DIRTcar Series tour. The #2L Benson’s Pet Center sponsored Big Block has started all points-paying Series races so far in 2021 with one top-five and five top-10s.

The last time the Series visited Brewerton, Lehner started and finished 17th. With a similar configuration as his home track of Albany-Saratoga Speedway, he’s looking for another top 10 on Tuesday, Oct. 5 before going into qualifying for the Billy Whittaker Cars 200 on Sunday, Oct. 10 at Oswego Speedway.

Catch what he has to say on this week’s Stick Signals podcast discussing what NAPA Super DIRT Week means to him.

Mat Williamson, in the #88 Buzz Chew Racing Big Block, wants to use Brewerton as a launching point for the late-season races. The St. Catharines, ON star is not only the defending Super DIRTcar Series champion but he is also the defending Brewerton race winner.

Williamson has been creeping up the standings and currently runs fourth with one win, four top-fives, and eight top-10s in Series points racing. In 2019, Williamson’s Brewerton win started him on a path to his first championship. This year, the #88 is locked in an extremely tight points battle in the top-five.

Third in points is Peter Britten in the #21A. The Australian superstar took the Hard Charger Award last time the Series came through. Britten picked up his second career Series win this year at Land of Legends Raceway. He was also in contention for the Land of Legends track championship this year.

Peter Britten and DIRTVision are helping bring international attention to the Super DIRTcar Series. Read more about that here.

The rest of the top-10 will be major threats to steal the Demon 100. Ronnie Davis III, Tom Sears Jr., Pat Ward, Tyler Trump, and Michael Maresca finish out the top-10 in track points at Brewerton.

The winner of the Demon 100 will receive the guaranteed starter status for the Billy Whittaker Cars 200 on Sunday, Oct. 10. If the winner already has that status, the guaranteed start will be awarded to the next highest finishing driver without one. For example, Chris Hile took second place at Orange County behind Stewart Friesen but because Friesen had already won (six times), Hile picked up the award.

That creates a scenario for a driver like hometown hero Tyler Trump to shock the field and pick up the NAPA Super DIRT Week guaranteed start for himself, which pays a minimum $1,500 just to take the green flag.