The most historic motorsports event of the year has arrived.

For the sixth time in its illustrious history, Oswego Speedway in Oswego, NY, will host NAPA Super DIRT Week—this time for the 50th Running of the event, Oct. 3-9.

The 50th Super DIRT Week brings the stars of the Northeast and beyond back to the “Clay Palace,” as drivers in the Super DIRTcar Series, DIRTcar 358 Modifieds, DIRTcar Sportsman, and DIRTcar Pro Stocks duel to put their names in the record books – currently more than 250 are entered between the four divisions, representing nine states and three countries (Australia, Canada and the United States).

Also, when the racing is over, the party is far from over. There is a plethora of fan activities throughout the week, including a cornhole tournament, the City of Oswego Parade presented by Harborfest and live music throughout the week.

If you can’t make it to the tracks, watch all the action live on DIRTVision – either online on with the DIRTVision App.

Here are some of the events to keep an eye on at NAPA Super DIRT Week 50:

Mat Williamson, of St. Catharines, ON, is the two-time defending champion of the event, besting five-time winner Billy Decker, of Sidney, NY, for the win last year.

Another name to keep an eye on is Stewart Friesen, who hopes to win the Big-Block Modified crown jewel for the sixth time. The Niagara-on-the-Lake, ON driver hasn’t won the event since 2016 – Super DIRT Week’s debut at Oswego Speedway.

SALUTE TO THE TROOPS 150 (Saturday, Oct. 8): While Friesen hasn’t found Victory Lane recently at Oswego in a Big Block, that’s not the case in the DIRTcar 358 Modifieds.

“Mr. Freeze” is the defending Salute to the Troops 150 winner, winning the race for the first time in 2021.

Billy Dunn, of Watertown, NY, the defending pole winner of the race and defending DIRTcar 358 Modified Series champion, finds himself at the top of the standings for the second consecutive year.

While a second-straight championship is on Dunn’s mind, he still hasn’t found Victory Lane in the Salute to the Troops 150. His best finish in the event is second to Jimmy Phelps in 2015.

He enters the weekend with momentum after scoring a DIRTcar Sportsman Series win at Fulton Speedway and sits fourth in the Series standings—49 points behind leader Tyler Corcoran, of Central Square, NY.

Four drivers are within 49 points, as Cocoran holds a 34-point lead on Cody McPherson, of St. Catharines, ON, and a 41-point lead on Cameron Tuttle, of Wilson, NY.

Cedric Gauvreau, who won the opening race in the DIRTcar Sportsman Fall Championship chase at Albany-Saratoga Speedway, is 65 points behind Corcoran in fifth.

The Gatineau, QUE, driver previously announced this will be his last season in a Pro Stock and hopes to end it on a high note in Victory Lane.

As of Oct. 1, he owns a 31-point lead over Tyler Bushey, of Heuvelton, NY, who is also searching for his first win at Oswego.

Chad Jeseo is the defending winner of the event, as he looks to become the first driver to win back-to-back at Super DIRT Week since Rob Yetman, of Castleton, NY, won five straight from 2013-2017.

This year’s DIRTcar Pro Stock 50 will also have some NASCAR flare as Kenny Wallace and Kenny Schrader compete in the division for the first time at the “Clay Palace.”

SATELLITE SHOWS: The racing at the “Clay Palace” isn’t the only high-octane action on tap for the 50th NAPA Super DIRT Week.

For the second straight year, the week starts off with two big nights of racing in Central, NY.

Weedsport Speedway in Weedsport, NY, will start Super DIRT Week on Tuesday, Oct. 4, with the Super DIRT Week Kickoff Party. The DIRTcar 358 Modifieds, DIRTcar Sportsman, and DIRTcar Pro Stocks will be in action.

Then, on Wednesday, Oct. 5, the action moves to Brewerton Speedway in Brewerton, NY, for the annual Hurricane 75. DIRTcar 358 Modified and DIRTcar Sportsman drivers have their chance to tame “The D-Shaped Dirt Demon” as the final tune-up before the racing action starts at Oswego.

RACING’S BIGGEST PARTY: While the racing is at the forefront of NAPA Super DIRT Week, it’s called Racing’s Biggest Party for a reason.

The fun at Oswego Speedway kicks off on Tuesday, Oct. 4, with a fan cornhole Tournament at noon before the racing begins at Weedsport.

Then, on Wednesday, Oct. 5, the day kicks off early (8am) with a Charity Pancake Breakfast in memory of Zachary Hackett at the Island at Oswego Speedway, sponsored by J&J Supply of NC and Milton Hershey School, and benefiting the CHC Learning Center.

After breakfast, the streets of Oswego take center stage at noon for the City of Oswego Parade presented by Harborfest, featuring several race cars that will be competing in the event and historic ones like Gary Balough’s “Batmobile.”

Once the racing starts at the “Clay Palace,” there’s more entertainment at the track.

Don’t miss DJ performances after the races at the Island Stage on Thursday, Friday and Saturday nights. On Saturday night, after the Salute to the Troops 150, the party begins at 8pm and will go well into the night. First there will be a DJ performance at 8pm. Then, the band Dirt Road Ruckus takes the stage from 10pm to 1:30am. And after they’re done, the DJ performance starts back up.

On Sunday, Oct. 9, at noon, fans will get to see their favorite drivers up close during the Super DIRTcar Series Top 30 autograph session in the midway.

For tickets to the 50th Running of NAPA Super DIRT Week at Oswego Speedway, Oct. 3-9, and the full schedule of events, CLICK HERE. 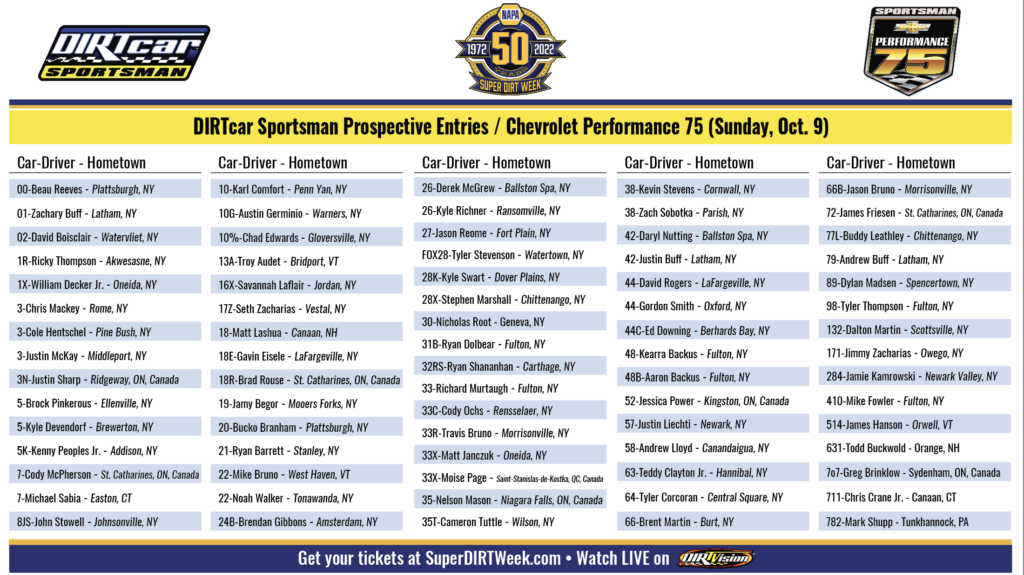 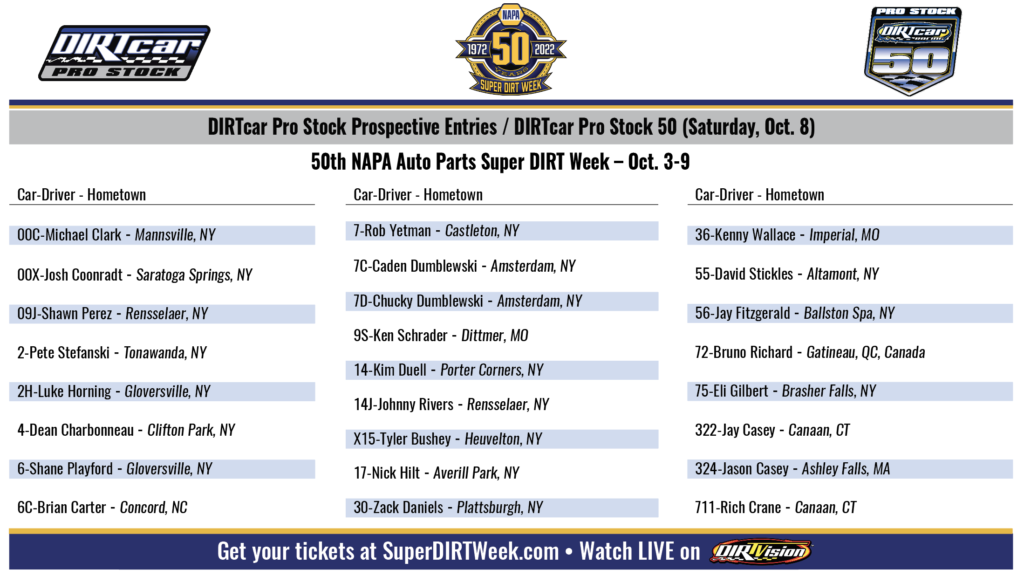