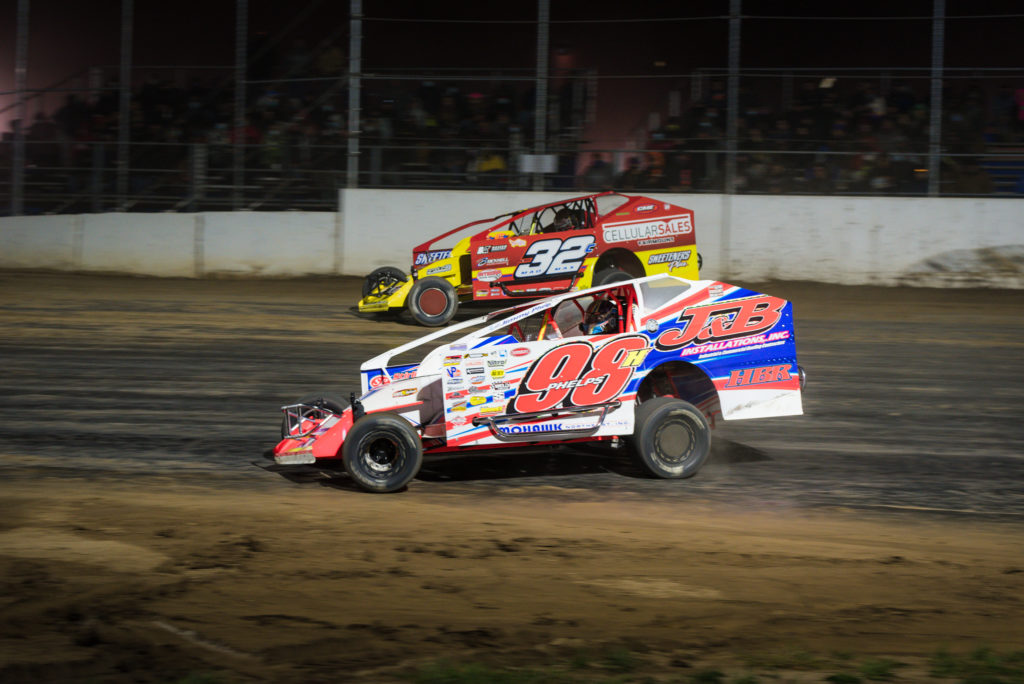 WEEDSPORT, NY – The Super DIRTcar Series Big Block Modifieds are ready to rumble at Weedsport Speedway for the $7,500-to-win Heroes Remembered 100 on Sunday, May 30.

Young heroes such as Mike Mahaney, Tim Sears Jr., and Max McLaughlin are hitting their stride and taking the fight to elite drivers like Matt Sheppard, Billy Decker, and Jimmy Phelps on every lap of every Heat Race, Last Chance Showdown, and Feature so far in 2021.

The margin of error is razor-thin. Mere tenths of a second can mean the difference between the front row of the Feature or loading up on the trailer.

“The Baldwinsville Bandit” Jimmy Phelps is riding 10th in the points. Home-field advantage may come into full effect as he is both a full-time Series driver and promoter of the renowned Weedsport facility, making the Heroes Remembered 100 especially important to him.

But solely as a driver, Phelps is looking at the entire weekend which includes a stop at Lebanon Valley Speedway — The Valley of Speed — the next day. Linking together a pair of good points finishes at the two New York tracks will be key to his championship chase.

“We have to take it one race at a time,” Phelps said. “We have to claw our way back into the hunt. At Can-Am we had a potential top-five car and the brakes went out. Our redraw wasn’t the greatest but we were going to the front. I just decided it was safer to pull the car in. That was a DNF that we thought was going to be a good finish.”

Phelps has one top-five and three top-10s in four points-paying starts, so far, in 2021. Of those events, the World of Outlaws Bristol Throwdown at Bristol Motor Speedway proved to be challenging for him and his team, but they were pleased with their overall speed.

“Bristol was tough,” the Heinke-Baldwin Racing driver said. “We weren’t firing really well on starts, but we qualified in a redraw spot both nights and then drove our way right out of it. We didn’t race super well on Friday night but Sunday the car went forward and we got ourselves into the top-10.”

Phelps was especially racy at Bridgeport with a fifth-place run in his #98H Big Block.

“At Bridgeport we were pretty strong,” Phelps said. “I think we went a little too hard on the left side tires and didn’t adjust enough in the Feature. All in all, we haven’t been bad but we need to get a little more consistent in race mode and read the track a little bit better.”

The veteran driver is looking to settle into a rhythm and getting to racetracks where his HBR team has a solid notebook.

“We’re coming into some tracks now that we know,” Phelps noted. “We had decent speed last weekend in practice at Weedsport. Lebanon Valley is a crapshoot. Typically, we have a decent package for that track. It’s a mystery what we’ll get in early season track conditions. It’s the first time we’ve been there this early for a tour race. We gotta do our best to read that track.”

Although Phelps is riding 10th in points, it’s not for a lack of speed. It’s because of an influx of talent taking Super DIRTcar Series competition to new heights, according to the 46-year-old driver.

“There’s an incredible amount of talent coming in,” Phelps said. “I think there are a few reasons. These coil cars are something you need to drive a lot more aggressively. The cars will handle it. It’s done two things. It’s made it easier for the younger guys to get good quickly and it’s hard for the torsion bar guys to adjust because that’s all they’ve ever run. So now when you go to the race track and there are 15 cars that can win.”

There hasn’t been a point-paying Super DIRTcar Series at Weedsport Speedway since 2019. However, Weedsport hosted the grand finale of DIRTcar OktoberFAST presented by DIRTVision in October of 2020 in front of an empty grandstand but on the TVs, tablets, and phones of many through DIRTVision.

“What will make the wait worth it is seeing the fans come back and enjoying the property and enjoying the racing,” Phelps said. “It was great to have a race there during OktoberFAST but it was hard to see the place empty. The energy that Weedsport creates when it’s full of people is unmatched. It’s great to start the year off about as normal as can be expected for the current climate. We want everyone to come, stay safe, and enjoy themselves.”

(RELATED: Phelps shares stress, reward, of being a promoter)

Along with the track’s unique shape, it tests every driver’s ability to perfect their throttle control and control of the wheel.

“Weedsport is extremely technical,” Phelps said. “It’s never going to be the fastest track on the tour because there are some intricacies to Turn 1 that slow the car down quite a bit. The backstretch into Turn 3 is pretty sweeping and you can carry some speed. But you have to have your car beneath you when you get to Turn 4. Traction becomes a big part of the equation. You gotta have your car right. You gotta be able to turn and get it stuck to the race track. It’s one of those tracks where your feet are always moving between the brakes and the throttle. It creates some great racing.”

Phelps knows first hand there’s not a bad seat in the house to see that great racing.

“I’ve always been a fan of Turn 1 even back to when the pits were on that side,” Phelps noted of his favorite place to watch the racing. “A lot goes on in Turns 1 and 2. But honestly, there are really no bad seats. Find a place to get comfortable and you’ll enjoy the show without a doubt.”

Tickets are on sale now for the Heroes Remembered 100 at Weedsport Speedway. Buy tickets here.

If you can’t make it to the track, be sure to pick up your FAST PASS and watch live on DIRTVision. Also follow the Super DIRTcar Series on Facebook, Twitter, and Instagram plus get race reports and features at www.SuperDIRTcarSeries.com.