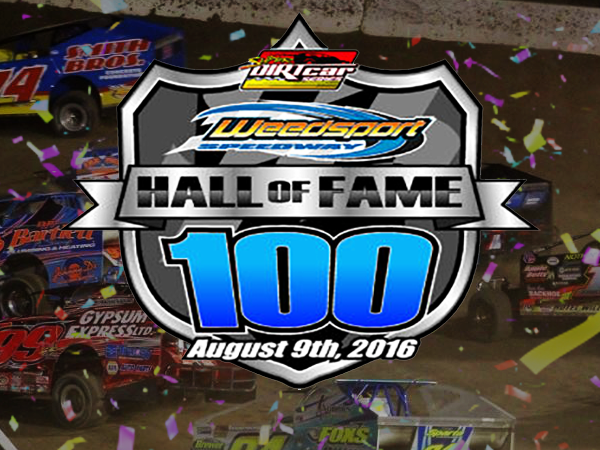 Illustrious Hall of Fame 100 takes on Weedsport on Tuesday, Aug. 9

WEEDSPORT, N.Y. – July 25, 2016 – The Super DIRTcar Series Big-Block Modifieds will be making their first appearance at Weedsport Speedway this season on Tuesday, Aug. 9 for the illustrious Hall of Fame 100.

“I think it’s definitely turning into a marquee event for Weedsport. We didn’t really have to do anything but keep it alive because it’s already been going for quite some time,” said Jimmy Phelps, General Manager of Weedsport Speedway. “Weedsport gets resurrected and the Super DIRTcar Series continues to strengthen. It seems fitting to have one of our premier events encompass the hall of fame.”

The Northeast Dirt Modified Hall of Fame will be celebrating its 25th annual induction ceremonies the night before the Hall of Fame 100 on Monday, Aug. 8. The event is free and open to the public.

Drivers who are being inducted into the Hall of Fame are Billy Pauch, Jeff Heotzler, and Don Diffendorf. Other inductees who are being noticed for their work in the racing industry are Eugene Mills, Bob Dini, Marty Beberwyk, George Caruso Jr. and Theresa Rogers.

“Jeff Heotzler and Billy Pauch are the only ones still racing that are being inducted into the Hall of Fame other than Frank Cozze. All other drivers who have been inducted don’t race anymore,”Phelps said.

“It’s kind of neat that the passed guys who have been inducted really support it. They come back and make a couple days out of it and stay to watch the racing. It’s really neat to have them there.”

Since the last Hall of Fame race back in 2015 the track has seen a lot of improvements. The staff at Weedsport has added new LED lights as well as new lighting in the pit area and an extra set of bleachers in the pit area.

Track owner, Al Heinke, is looking forward to the Hall of Fame 100 race.

“I think it’s an intricate part. We as an industry, as a group in racing, I think people and racers love the track because we treat everyone fairly and we like to keep our track and facility in nice shape,” Heinke said. “The racing is always good there. We’re excited and I think it’s cool to combine it with the Hall of Fame induction.

We’re excited to have the series there. The series has really stepped up this year. They have more cars following it and is excitable. Having that race in Central New York, there will be a lot of cars.”

Heinke and Phelps feel they will get a good amount of fans and drivers who will be coming to camp and stay over. With all of the upgrades that have been made they believe everyone will want to come and make it a two-day event.

“We’re ready to get the modifieds back because we haven’t had them at the track yet this year,” said Phelps.

The Super DIRTcar Big-Block Modifieds will be invading Weedsport Speedway on Tuesday, Aug. 9 to celebrate racing legends, as they will be competing for the $10,000 victory. Pit gates open at 4 p.m. grandstands open at 5 p.m. and racing will get underway at 6:40 p.m.