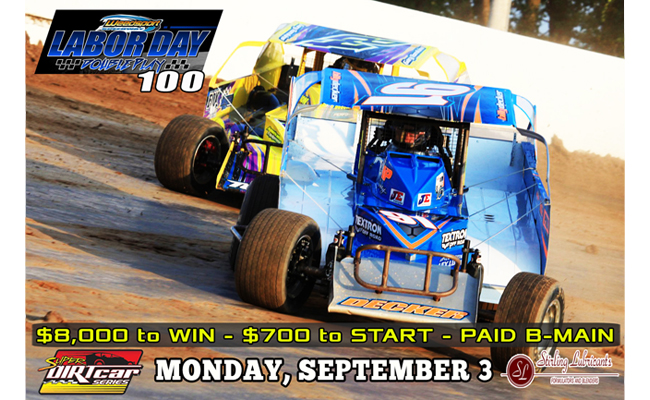 WEEDSPORT, NY — August 17, 2018 — With the support of Rochester based Stirling Lubricants, Weedsport Speedway’s Super DIRTcar Series Big-Block Modified Labor Day 100 purse has received a shot in the arm, now paying $8,000 to the winner with $700 to take the green along with a stout Last Chance Showdown payday.

Originally scheduled to pay $7,500 to win, with another guaranteed starting spot for the NAPA Auto Parts Super DIRT Week 200-lap finale on the line, Weedsport’s third Super DIRTcar Series show is now an even $8,000 to win, thanks to Stirling Lubricants.

Additional support guarantees that all drivers taking the green flag in the Labor Day 100-lapper will also earn a cool $700, providing a balanced pay structure top to bottom.

“Weedsport Speedway was founded on the strength of dirt Modified racing in the Northeast, and it is our goal to do our part to help preserve that strength,” said Weedsport Speedway promoter Jimmy Phelps. “We are proud to announce this purse increase with the help of Stirling Lubricants, and feel strongly that a well-balanced pay structure is the key to the success of the Super Dirt Car Series and its competitors.”

With 35 entries or less, all non-qualified cars will earn $200 tow money.

Joining the Big Blocks on the main bill will be the 360 Sprint Car Open, with some of the best winged Sprint Car racers in the area returning to Weedsport yet again.

The Labor Day Double Play will be the second winged 360 Sprint Car race of the season at The Port. Top winged combatants, such as Jason Barney, Coleman Gulick, Paul Kinney, Chuck Hebing, Matt Tanner, and Matt Billings, are again expected yet again.

Pit gates will open at 3 p.m. on September 3 with grandstand gates opening at 4 p.m. Qualifying will hit the Speedway at 5:40 p.m. with opening ceremonies set for 6 p.m.

General admission seating is available on September 3 for $25, with reserved seating set at $29. Reserved seat purchases by August 30 will earn a FREE Fan Pit Pass. Students 11-17 will see $10 admission with kids 10 and under FREE. Purchase tickets online or by calling (315) 834-3067.

About Weedsport Speedway: Purchased in 2013 by Al Heinke, Weedsport Speedway has returned to a real racers track, providing a complete venue for racers, their families and friends, and for the fans looking for motorsports entertainment. Officially opened for the first time on July 24, 1955 – the Weedsport Speedway 3/8 mile dirt oval has produced a legendary list of drivers and champions including Will Cagle, Danny Johnson, Bob McCreadie, Alan Johnson, Jack Johnson, and Dave Lape to name a few. Today the facility welcomes the best of the best in dirt short track racing from the Craftsman World of Outlaws Sprint Car Series to the Super DIRTcar Series Big Block Modifieds along with the DIRTcar 358-Modifieds, Sportsman, Pro Stocks, and more. While racing entertainment is the focal point, Weedsport Speedway has gone the extra mile in welcoming Weedsport Productions, which brings the facility full circle with a dedicated digital entertainment team for web, television, and on site screen usage.