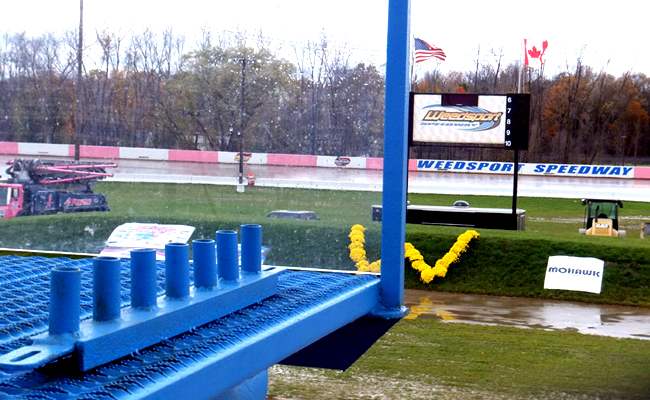 The Super DIRTcar Big-Block Modified Series race will not be rescheduled. Instead, Weedsport Speedway and DIRTcar officials will award “show-up” points and “start money” to the 36 teams who competed on Saturday before that night’s racing was delayed by rain to Sunday.

Fans with a Saturday ticket can apply it toward a $15 discount on tickets to the first 2016 Super DIRTcar Series event at Weedsport Speedway.

Next up for the Super DIRTcar Series will be the championship-deciding Bad Boy Buggies World Finals on Nov. 5-6-7 at The Dirt Track at Charlotte in Concord, N.C.

Stay up-to-date with the Super DIRTcar Series by following on Twitter @SuperDIRTcar, on Facebook at www.facebook.com/DIRTcar, or on the Web at www.SuperDIRTcarSeries.com.