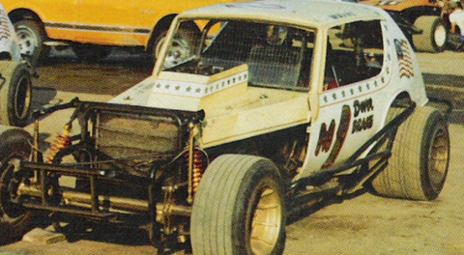 Sunshine State standout Wayne Reutimann has been selected as a 2008 inductee into the Northeast Modified Hall of Fame. Induction ceremonies are scheduled for Sunday, May 25 on the Cayuga County Fairgrounds in conjunction with the Advance Auto Parts Super DIRTcar Series event at the adjacent speedway.

The younger brother of Class of ‘97 Hall of Famer Buzzie Reutimann, Wayne followed his famous sibling from Zephyrhills, Florida to the dirt tracks of the Northeast where he raced Modifieds successfully for what was really a very short career.

And, as it can happen in these situations, even though Wayne was a top-flight driver, because of his brief tenure in the cockpit of a Modified on the Northeast’s dirt tracks his skills and accomplishments were sometimes overlooked and/or overshadowed by those of the elder member of the Racing Reutimanns.

This, however, was a mistake when it was made by any fan who watched him race or by any competitor who took him for granted when the cars rolled out to take the starter’s green flag.

A two-time Orange County (N.Y.) Fair Speedway Champion in 1975 & 1977 and the 1975 Eastern States 200 winner, Wayne Reutimann had such a natural skill and finesse in handling a race car that in some quarters he is considered to be even a better race-car driver than his older – and more heralded – brother.

Like so many others who are involved with motorsports, Wayne got involved in racing because his father, Emil Sr., had been a pretty fair driver on the short tracks around their Florida home. And his unusual introduction to race car driving took place one day when rain soaked the local track and all of the cars were called out to run the moisture off the racing surface.

“Buzzie got started the same way,” Wayne said some years ago as he recalled his first time turning laps around a race track.

“Whenever it would rain, they’d call everybody out to run the track dry. Dad would let us take his car out and run around. Of course, as the track started getting a little drier we’d just get going faster and faster.”

From that baptism, Wayne went on to asphalt Sportsman racing and the car that he used was one of his father’s old Modifieds – a 1935 Chevy coupe that was identified as No. 00 jr. – powered by Chevrolet and GMC six-banger engines. And it was from this beginning that he began to show some real racing talent.

From that entry level of competition Wayne moved on to asphalt Late Models and in 1965 he won the Florida State Late Model Championship with an exciting half-car-length victory over Bobby Allison in a 200-lap race at the Golden Gate Speedway in Tampa.

However, while Wayne was spending his time in Florida racing, his brother Buzzie and another Tampa Bay area resident and NE Modified Hall of Famer by the name of Will Cagle left the region in pursuit of greener pastures. They returned home each winter with stories of their adventures in Northeastern dirt track Modified stock car racing.

These tales of track championships, races won and high-paying purses certainly got Wayne’s attention. But while it took him a little bit of time to forsake the racing success that he was having on the tracks of the Sunshine State to pack it all in and try his hand at Northeastern dirt-track Modified competition, once he did so he became a consistent winner and front-runner from 1972 through 1977 at New Jersey’s East Windsor Speedway (seven victories), Pennsylvania’s Nazareth Raceway (four victories) and Orange County (16 victories) in such outstanding rides as Paul Blair’s No. 3, Ron Ritter & Jack Kleintop’s No. 666 and Richard Marinelli’s No. M-1.

Wayne’s relatively short time in the Northeast saw him compete in six (1972-1977) Rite Aid 200s at the New York State Fairgrounds in Syracuse. And while he never did bring home Super DIRT Week’s top prize, he did let everyone in attendance know that he was there as he posted four top-10 finishes – third in 1975, sixth in 1972 and 1974, and 10th in 1973 – in the sport’s biggest race on the Moody Mile.

Never one to turn down a challenge, Wayne has also raced successfully in United States Auto Club and International Motor Contest Association Sprint Car competition on both dirt and asphalt tracks. And he has even competed in USAC’s Championship Dirt Cars.

Cited by his brother Buzzie as “the most versatile driver in the business,” Wayne feels that his greatest achievement in racing has been to win championships in Modifieds, Late Models and Sprint Cars. And as recently as 2005 he added to his accomplishments the United Sprint Car Series Asphalt Thunder title.

Today, the 63-year-old professional race car driver still gets the job done in Winged Sprint Car competition in Florida and regional touring series events while also devoting a good deal of time helping his son Wayne Jr. with the development of his very promising racing career.