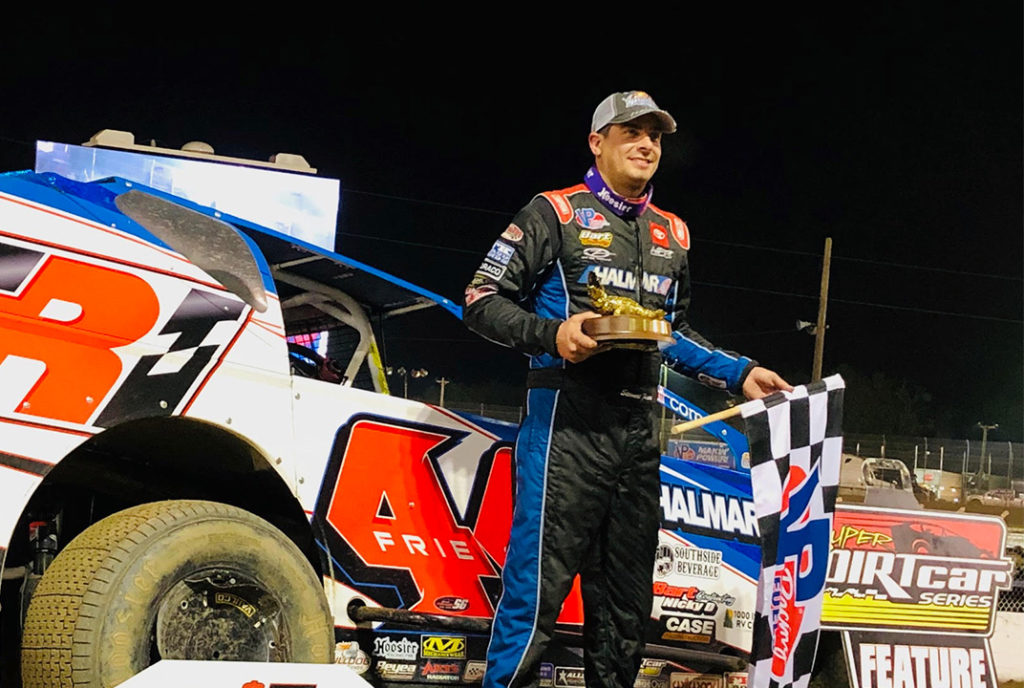 Ripped from the pages of the greatest fiction stories, like those featuring epic duels between Mr. Freeze and Batman, Stewart Friesen and Peter Britten created a live-action duel of epic proportions at Volusia Speedway Park.

However, there were no fancy gadgets or corny catchphrases, just two hellacious 800hp Big Block Modifieds wheeled by men throwing every ounce of talent they brought with them at each other.

In the final pages, Friesen is the victor after taking advantage of a jaw-dropping wheelie Britten pulled in Turn 1 after hitting a rut with two laps to go.

“That was awesome,” said a winded Friesen about his battle with Britten. “What a race. What a racetrack. It was great. I love this place. You can race anywhere… Great race. It was awesome racing with Peter.”

The setting was the first of five straight nights of racing for the Super DIRTcar Series during the 51st DIRTcar Nationals. Britten emerged as the early hero, claiming the Billy Whittaker Cars Fast Time Award and then winning the first Heat Race. That path led to the pole for the 30-lap Feature – originally scheduled for Tuesday night, but due to evening rain shows got pushed to running early Wednesday morning. Friesen also won his Heat, which put him on the outside of Britten for the main event.

They made for an international front row with Britten hailing from Brisbane, QLD, Australia and Friesen from Niagara-on-the-Lake, Ontario. The diversity extended into their DIRTcar Nationals experience, too. Friesen is a two-time Big Gator champion and had nine DIRTcar Nationals wins. Britten was looking for his first.

When the green flag flew, the Aussie launched ahead of the SRI Performance/Halmar International #44 to claim the early lead, but Friesen kept a tight grip on him. Working the top of the half-mile track, Friesen powered by Britten to steal the lead on Lap 2.

The NASCAR Truck Series star then held command out front for the next 13 laps. Not comfortably, though. Britten stayed in Friesen’s tire tracks and got close enough to show him a nose about 10 laps in. And while, they toyed with the idea of a battle, Max McLaughlin – in his first appearance behind the wheel of the #8H for Heinke-Baldwin Racing – lurked in third, waiting for a chance to attack.

Give these guys another round of applause… What a helluva show they gave us 👏 pic.twitter.com/CriWMXUjYc

A caution on Lap 14 for Erick Rudolph getting into the wall created a plot twist and laid the foundation for an epic conclusion.

Lining up double file, Friesen picked the bottom for the restart with Britten to his outside. The choice ended up favoring Britten. Earning the title of a “gasser” Britten, already known as “The Batman” kept his foot in the throttle and manhandled his way past Friesen for the lead.

“I was able to get rolling on the top there early,” Friesen said. “Peter was on the gas. I felt like we were pretty good before that caution, and I picked the bottom, and it didn’t really fire off. He got me in the middle, and we went back and forth a bunch of times. Just had a great race. Great race car.”

Then, it was on. There wasn’t a lap the two didn’t attempt a pass on each other, whether with a dive bomb into the corner or with a massive slide job through Turns 1 and 2. The scorecard will say there were seven official lead changes, but unofficially the two went back and forth with the lead about every lap.

Under 10 laps to go, lap traffic started to play a significant role. While sparring for the lead, Britten and Friesen were given the extra challenge of calculating every maneuver with accurate precision. As the end neared, Britten positioned himself as the likely victor, holding a steady lead over Friesen.

However, with three laps to go, Britten hit a rut in Turn 1 that bounced his front end about two feet off the ground, causing his Ryder Racing #21A to wheelie through the corner. That allowed Friesen to sneak underneath him and drive away with his 10th DIRTcar Nationals Feature win.

“We seem to have a flat left rear now, so I don’t know if that is what was going on,” Britten said about what may have led to his demise. “I got just a little bit tight and couldn’t quite roll the corner the way I needed to, and I started shoving and Friesen went around me. We were going back at it. It was a lot of fun. I would’ve loved to have been on top.

“We’ll dust it off and try again tomorrow.”

McLaughlin, the defending Big Gator Champion, was unable to get close enough to contend with Friesen and Britten but came home third with his new team.

“First night out with a new team and have a chance to contend for a win with Peter and Stew is a pretty good accomplishment,” McLaughlin said. “We were really free there. Not good in the black and that’s where we needed to be to pass them.”

Further behind them, eight-time and defending Super DIRTcar Series champion Matt Sheppard made the biggest improvement of the night. After having to race his way into the Feature through a Last Chance Showdown, Sheppard charged his way from 26th to 11th.

With the win, Friesen is now the early points leader for the Big Gator Championship – crowned on Saturday, Feb. 19. However, he’ll miss Friday night’s race due to his NASCAR commitments, meaning this story is only the beginning of an epic week-long saga.

The Super DIRTcar Series returns to Volusia Speedway Park for its second night of racing during DIRTcar Nationals, accompanied by the World of Outlaws CASE Late Model Series. For tickets, CLICK HERE.