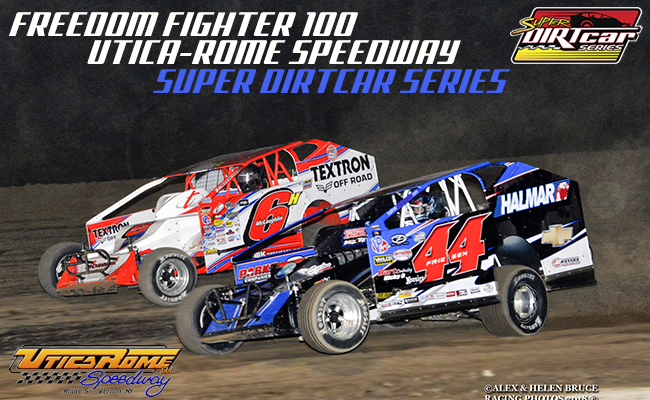 CONCORD, NC – July 5, 2018 – On Sunday, July 8 the Super DIRTcar Series Big-Block Modifieds invade Utica-Rome Speedway for the Freedom Fighter 100. All important Series Championship points are on the line. Matt Sheppard, Max McLaughlin, Jimmy Phelps and others are tied up in knots at the top of the standings. The HBR stable is poised to take a win, but Sheppard, Erick Rudolph, and Tim Fuller mean to break up their party. Utica-Rome Speedway has been bitten with the rainout bug so far in 2018, and area race fans are eager for the premier Big-Block Modified series in the Northeast to roll into town.

Utica-Rome Speedway’s half-mile circuit rewards only the very best Big-Block Modified drivers and crews. It’s fast, dicey, and only the best and bravest drivers have claimed victories. A total of ten Super DIRTcar Series events have taken place at the Vernon, NY race track. Two of the greatest drivers of all time have a pair of wins each: Billy Decker and Brett Hearn, both of whom have failed to secure wins on the Series trail in 2018.

In 2015 five-time Super DIRT Week Champion and NASCAR Camping World Truck driver Stewart Friesen broke the track record with an 18.816 second lap. Friesen has the most all-time wins at Utica-Rome Speedway with 54 wins under his belt. Also, Series star and points leader Matt Sheppard holds third on the all-time Utica-Rome wins list making him, as always, a serious contender. In 1982 the Super DIRTcar Series made their first appearance at Utica-Rome Speedway. The legendary Jumpin’ Jack Johnson in the no. 12a won that inaugural race.

Last year, in a race halted by two red flags, Friesen shot by Pat Ward around the outside for the checkered flag. Thankfully no injuries occurred in the incidents, however the second incident will go down in history as a defining event in the rivalry between Sheppard and Larry Wight. Sheppard and Wight made contact resulting in Wight’s machine catching air and pirouetting on the backstretch. The drivers were not on same page as to what lead up to the wreck and they showed it.

General admission tickets are $30 with $3 off for seniors and veterans. Kids under 16 years of age get in for just $5. In addition to the $6,000 to win Freedom Fighter 100, the Empire Super Sprints will join the card. Gates open at 4:30 PM with Qualifying Races commencing at 7:00 PM.