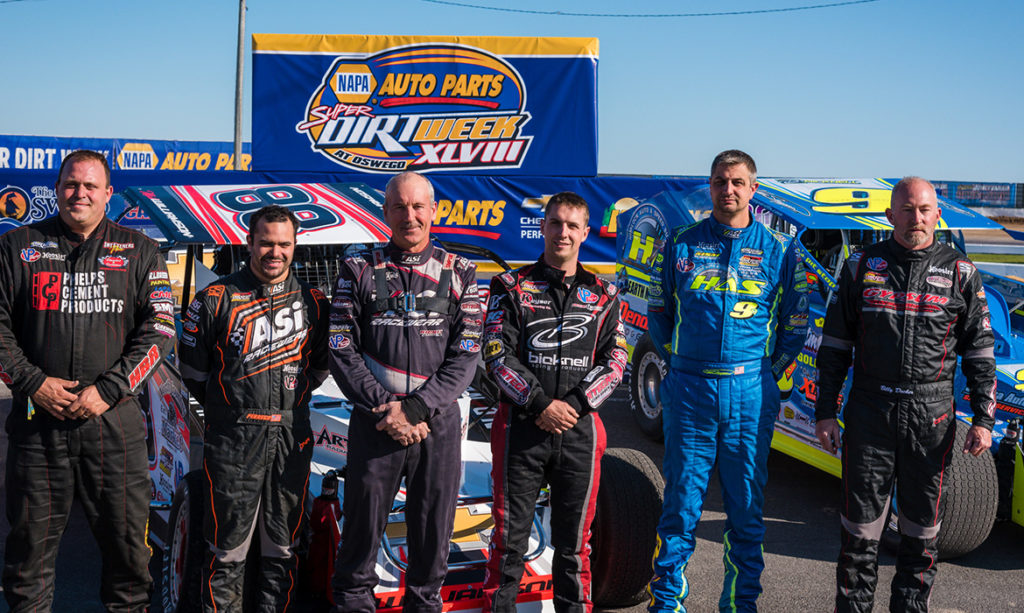 Amidst the busiest week in dirt racing, Billy Decker is relieved and excited to be on the top of the heap going into Sunday’s 200.

“The Gypsum Wholesaler car is really good. I can’t thank the guys at the shop enough,” said Decker on the infield stage.

Decker, still not satisfied with his speed, was looking for some tips from fellow driver Mat Williamson, “I asked Mat if I made a change and what it would do to the car and he gave me the deer in the headlights look.”

“On behalf of all the drivers I want to thank the product and title sponsors for their support this weekend.”

Matt Sheppard was sure he had the winning lap, but Decker was just a hair too good.

“I thought I had caught pretty good lap there from behind the wheel but Billy [Decker] was just really, really good. We had a fast car yesterday and a fast car today, so we are looking good for the 200.”

Earlier in the day Mat Williamson timed top 6 in the DIRTcar 358 Modified Series Salute to the Troops 150 Time Trial session. Then he came back with his Big Block and clocked it third fastest.

“We’ve been running pretty good. I’m actually a little disappointed with third. It’s a good run for the Buzz Chew guys but we wanted to be on that front row.”

Williamson is very happy with the smooth, fast track. He said, “The guys that make this racetrack deserve a big pay raise because they did an excellent job. There ain’t a ripple in it.”

Tim Fuller also timed in the top 6 for the 358 Modified portion of the event. That’s a good sign going into the weekend’s Features.

“I’m feeling a lot better about the 200 since this morning when we couldn’t get a good lap down.”

“It’s great to Time Trial well in both and start up front and get locked into the show. I had to make the race. No provisional so this is good!” Fuller said with a wide smile.

Anthony Perrego, a Super DIRTcar Series invader, was happy to lock the No. 18 in.

“We were fast all day yesterday. The track changed a little bit there and we got down into the 20-second bracket.”

Justin Haers has shown his grit and resilience this season. He too is relieved to be locked in.

“It’s a big relief off our shoulders. There so many cars here. It’s a great feeling to be locked in. We can play with some stuff in the Heat Race. We don’t have to worry about racing into a qualifying spot.”

“The good thing is that I think I can make my car a little bit better.”

The Super DIRTcar Series won’t see the track until 3:45 PM tomorrow for a practice session before the Triple 30 Heat Races. We’ll see you back at Oswego Speedway tomorrow.