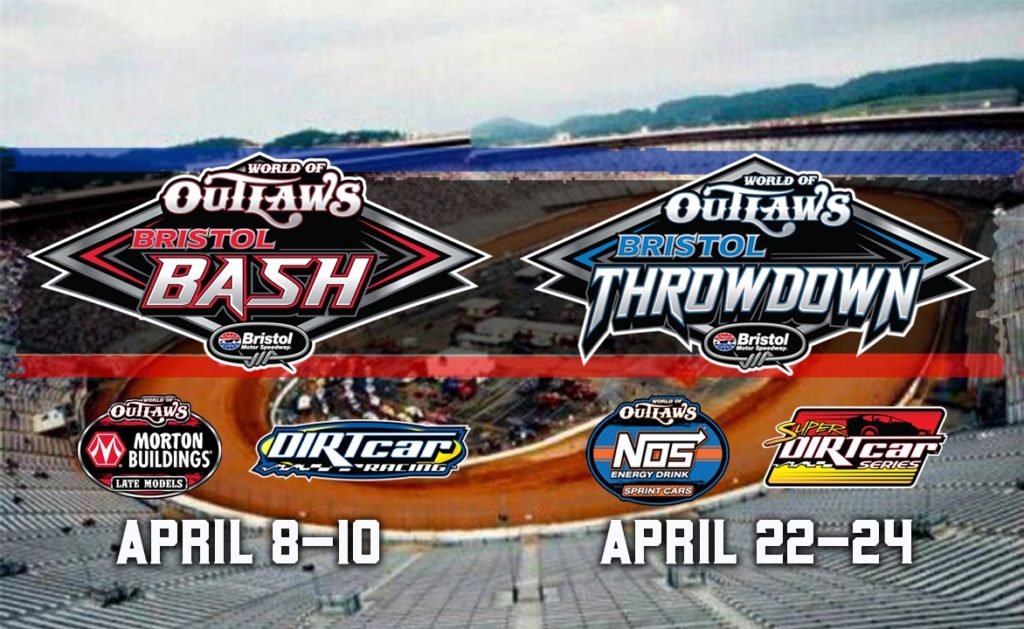 Bristol Motor Speedway’s dirt track will get pushed to its limits in April 2021 when the World of Outlaws returns to unleash its high-horsepower Sprint Cars and Late Models on the famed high-banks of The Last Great Colosseum for the first time in nearly two decades.

The two races will end two months of historic dirt racing action at BMS, which also is hosting the inaugural Bristol Dirt Nationals March 15-20, and the much-anticipated NASCAR Dirt Racing weekend, March 27-28, which will showcase the Food City Dirt Race in the Cup Series and the Pinty’s Dirt Truck Race for the Camping World Truck Series. The Food City Dirt Race will mark the first time NASCAR Cup Series stock cars will race on a dirt surface in more than 50 years.

The World of Outlaws Sprint Cars competed at Bristol Motor Speedway in 2000 and 2001, with legendary driver Sammy Swindell scoring trophies and large paychecks in both events. The return of the ultra-popular motorsports series is one of the signature events that BMS is providing to its fans to amplify the celebration of its milestone 60th anniversary.

New Berlin, Ill.’s Brandon Sheppard dominated the World of Outlaws Late Model Series in 2020, winning 14 times en route to his third series crown. Other stars of the series include Ricky Weiss, Cade Dillard, Darrell Lanigan and a pair of Tennessee favorites, Scott Bloomquist of Mooresburg and Jimmy Owens of Newport. Two-time defending champion Brad Sweet leads the World of Outlaws NOS Energy Drink Sprint Car Series. The Grass Valley, Calif. native has piloted his popular No. 49 Kasey Kahne Racing machine to 58 career victories, including 24 wins in the last two seasons. Sweet’s main rival is one of the most successful World of Outlaws champions in history, Donny Schatz of Fargo, N.D., who has amassed 10 championship titles and 299 race victories in his storied career – including a win at BMS in 2001. Other drivers to watch in the World of Outlaws Sprint Car Series include Logan Schuchart, Sheldon Haudenschild and 2019 Knoxville Nationals champion David Gravel. NASCAR Cup Series regular Kyle Larson raced to 12 victories on the circuit last season.

“We’re thrilled to again partner with Bristol Motor Speedway to provide four exciting nights of racing with the best Sprint Car, Late Model, Big Block Modified and UMP Modified drivers in the world,” DIRTcar and World of Outlaws CEO Brian Carter said. “The Bristol World of Outlaws events from the early 2000s have remained fan favorites to this day and we’re sure fans will once again be enthralled with what each series will have to offer around Thunder Valley in 2021.”

Founded in 1961, Bristol Motor Speedway is celebrating its 60th anniversary in 2021 and has many exciting things planned during the year to reflect on the great moments that have made the multi-use sports and entertainment destination one of the very best for creating wow moments and cherished memories for fans. Home to epic NASCAR races and other major motorsports events, as well as NFL and college football games, a wide variety of music concerts and other captivating events, Bristol Motor Speedway has shined in the spotlight on many occasions throughout the past six decades.

To make the event as safe as possible for all attendees, BMS is instituting procedures to reduce contact and crowd density as guests and competitors purchase tickets, enter the grounds, enjoy the event and depart the facility. Face coverings will be a required accessory in high-traffic areas inside and outside the stadium for all guests who attend. The “Mask Up” campaign is part of an important initiative by Bristol Motor Speedway that strongly encourages the public to wear face coverings, not only when they are visiting the Speedway, but also when they are out in the surrounding communities as well, and to follow all of the necessary protocols and guidelines to do their part to help reduce the spread of COVID-19.

Spectator tickets for both events will go on sale on Friday, January 8, 2021. Ticket prices for both World of Outlaws weekends of racing at BMS include: $30 Thursday; $40 Friday and Saturday; $80 weekend; an upgrade ticket for pit access is $15.  Pit passes are $35 for Thursday; $45 on Friday and Saturday and a $90 weekend pit pass. Kids (6-12) tickets are $5 for each day and $10 for the weekend combo ticket. Kids 5 and under are free. Kids (6-12) pit passes are $25 and the kids (6-12) combo pass is $40. Kids 5 and under pit passes are free. For additional Bristol Motor Speedway ticket information, please visit www.bristolmotorspeedway.com.

About Bristol Motor Speedway
Forged amid the scenic mountains of Northeast Tennessee near the Virginia state line, Bristol Motor Speedway is The Last Great Colosseum, a versatile multi-use venue that hosts major auto races, football games, concerts and many other captivating events. The facility features a 0.533-mile concrete oval race track with 28-degree corner banking and 650-feet straightaways that offers racing in several NASCAR touring series, highlighted by two major Cup Series weekends and in 2020 the track also served as host of the prestigious NASCAR All-Star Race. While at the track, fans are offered a unique viewing experience courtesy of Colossus TV, the world’s largest outdoor center-hung four-sided video screen with a 540,000-watt audio system. The adjacent quarter-mile dragstrip, Bristol Dragway, offers more than 50 events annually, including the marquee NHRA Thunder Valley Nationals. The Thunder Valley Amphitheatre presented by Ballad Health transforms Bristol Dragway into a premier outdoor concert venue for the world’s greatest music performers. Three football games have kicked-off inside the oval, most notably the 2016 Pilot Flying J Battle at Bristol, where border rivals the University of Tennessee and Virginia Tech met before an NCAA-record crowd of 156,990. In existence since 1961, Bristol Motor Speedway was purchased in 1996 by Speedway Motorsports, Inc., a publicly traded company that is a leading marketer and promoter of motorsports entertainment in the United States. For more information, please visit www.bristolmotorspeedway.com.